A look at our legacy: WCU and the OJ Simpson trial 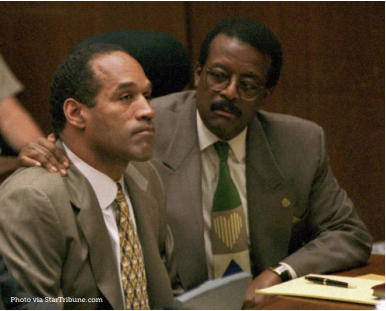 It’s kind of weird to say, but I am obsessed with the OJ Simpson story. A professional football player goes from rags to riches, lives the glamorous Los Angeles life with a beautiful wife and kids, acquires money and fame, only to fall from his throne after (possibly) committing a heinous crime.

Then, by the skin of his teeth, he dodges a life in prison and a murder sentence, walking away a free man.

Between FX’s “The People v. OJ Simpson” series and ESPN’s “30 for 30” series, both on the enigmatic life of OJ Simpson and released to recognize 20 years after the shocking verdict, many of us (myself included) became hooked on all things “trial of the century.”

22 years later, The OJ Simpson trial dialogue isn’t just about whether he murdered Ron and Nicole or whether the glove fit and we must acquit. Instead, it brings Americans together to discuss arduous but essential topics: race, privilege, the criminal justice system, the media and so on. Here is the front-page article from The Quad’s October 10, 1995 issue:

It’s a trial that started with a memorable car chase, continued with over a year’s worth of unbearably long days in a courtroom and has ended in a verdict causing as much controversy as the Scopes “monkey trial” did in the early 1900s. It didn’t matter who thought O.J. Simpson was guilty or innocent except for the 12 jurors deciding his fate. However the country waited with bated breath on Oct. 3 as the nervous and quick reading juror mispronounced Orenthal, but paused briefly, in true theatrical style, before proclaiming Simpson not guilty of murder. Since the verdict, the country has been glued to television sets watching Oprah Winfrey, Barbara Walters and Deborah Norvill rehash the victory of Simpson and his “dream team” of lawyers and the agony of Nicole Brown and Ron Goldman’s families. Students at West Chester University were no different. In an informal poll, students’ reactions to the verdict ranged from feelings of injustice to victory to complete indifference. One thing was clear—the Simpson trial verdict affected everyone on campus in one way or another, regardless of race, sex or creed. Freshman undeclared Caey Powell had complete faith in Simpson’s innocence. “He was innocent from the start,” Powell said. “He couldn’t have done it. O.J.’s the man.” Sharhonda Coston, a junior secondary education major, agreed with Powell. “I knew he was not guilty from the first week and it was a race issue from the very first day because how did they pick him out from all the people who could have done it?” she said. “The evidence was just not there, and the evidence that could have made him guilty, Judge Ito made inadmissable. They just couldn’t give it up,” she said. Senior communications major Shelli Pentimall said the verdict gave her faith in the American justice system. “It showed that he was innocent until proven guilty,” she said.

“The O.J. trial wasn’t really significant in my realm of life and it’s really interesting how many people relied on this as some sort of influence on their daily lives.” But not everyone was as happy or faith-filled after the 1:09 reading of the verdict. “The defense did everything and everything they could to get him off whether it was the truth or not,” John Kapell, a senior communications major said. Other students said they believed Simpson’s wealth and the “dream team” of lawyers were the only reasons for Simpson’s newfound freedom. According to Dave Stein, a freshman criminal justice major, “I think he bought his freedom.” Other students were simply disgusted with the trial, often calling it a “media circus.” “I think it’s been blown out of proportion,” Megann Little, a freshman vocal performance major said. “It’s gone on for a year and now it’s going to go on longer because everyone’s thinking about the verdict. “It’s over and there’s nothing we can do about it,” she said. Another group of students, like senior psychology major Megan Cahill, were still confused and unsure of their feelings on the case and the verdict. “I’m so mixed,” Cahill said. “I don’t know what to think.”

One thought on “A look at our legacy: WCU and the OJ Simpson trial”