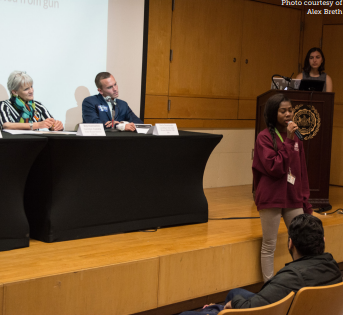 The town hall began with a series of questions from Sullum to both the individual candidates specific to their position as well as more general questions on policy. One of the main topics of discussion involved gun control as a response to mass shootings and whether or not it should be pursued at various levels of government. Staying in line with general party views, the three Democratic candidates voiced support for bans on assault rifles, expanding background checks and gun-free zones. However in a departure from his party’s platform, Deminski also voiced agreement for some gun restrictions as well. Only Krawchuck firmly stood against gun restrictions, even calling for a reduction in current gun restrictions, citing CDC studies on gun control efficacy and the Pennsylvania Constitution’s law which closely mirrors the Second Amendment.

While there was a designated time for audience questioning, several outbursts from the crowd in response to some of the candidates’ answers happened throughout the town hall. One audience member interrupted the panel to angrily oppose Krawchuck’s support of unrestricted gun sales.  Another audience member  criticized the other candidates’ focus on civilian gun control without addressing police militarization and brutality. The panel was brought back on track after a short period of disturbance and continued relatively smoothly until the official Q&A began.

During the Q&A, the questions moved beyond just gun control to many other policies regarding gun violence including: the efficacy of gun free zones, means to demilitarize the police, issues regarding  background checks, domestic violence offender gun bans and more.

One audience member revealed an interesting point on gun free zones in public places like parks and schools, forcing Comitta to admit that such a policy is impossible to enforce, but does serve as a statement regarding the values of the community. Comitta and Deminski discussed a gun buyback program, but they felt it was incomplete as a means of getting guns out of the hands of potential violent offenders. Wright and Krawchuck also debated the Drug War and its effect on gun violence, police brutality and mass incarceration.

The town hall concluded after an hour and half of informative discussion, with the various candidates advertising their campaigns for their upcoming elections in May and November. Sullum encouraged students who care about their community’s policies to continue involving themselves in activities like town hall and voting.  Elections take place on May 15.

Alexander Habbart is a third-year student majoring in mathematics and philosophy. ✉AH855541@wcupa.edu.