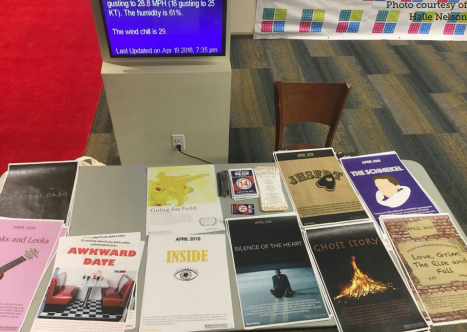 On Thursday, April 19 from 6 to 8 p.m. in Sykes Student Union, WCU held their reception and awards ceremony for the 48-Hour Dub-C Film Race. This competition invited students from WCU and Cheyney University to form teams and compete by making a film in 48 hours and submitting it. This day was planned by professor Kanan Sawyer’s two Event Planning class sections. They thanked Cheyney University, Dennis Degnan Photography, Rip Roarin Productions, West Chester Together, WCU College of Arts and Humanities and the WCU College Department of Communication Studies for their roles in making this event come to fruition.

The reception featured an appearance by this year’s Miss WCU, networking opportunities for students and foods like brie, almond and pear phyllo, pigs in a blanket, bacon wrapped scallops, Asian chicken skewers and an international cheese tray.

In the middle of the reception catered by New Street Catering, one member of Sawyer’s Event Planning class spoke about the process that went into organizing this day. Junior communication studies major Audrey Cimmarrusti, who is also the member of the administrative team in the Event Planning class, said the following: “I would say the most challenging part [of planning this event] is that we had to, in each of our groups, put together a request for proposal … Just having to come together as a team and really work towards figuring out, ‘ok, we have to have all of our catering in there, we have to have our room design. What are we going to do for the theme? How are we going to project to the client in a way that they understand what we’re trying to portray for the event?’ … It was very challenging but very rewarding because it was so real-life.”

Sawyer joined forces with communication studies professor Meghan Mahoney to make the film race possible. Sawyer stressed, more than anything else, that the most important thing students need to consider when they plan an event is to know their audience. “Is the event supposed to be glamorous?” said Sayer. “Is it supposed to be silly? Is it supposed to be fun? Are they detail-oriented? What’s going to keep them motivated? Every audience is different. You can pay a lot of attention to floral arrangements, but does that really matter in the grand scheme of things?”

Mahoney was “minorly involved” in the Ohio State eight-hour shootout film festival as a graduate student. When she came to WCU, she said, she saw the talent in our video production students as well as the diversified majors that were interested in video production, so she felt a similar event would go over well on campus. “I knew it would be a good opportunity to get some published portfolio pieces,” said Mahoney, “that are also refereed by industry judges before they hit the job market. So I just thought it was a really strong opportunity to have good work in a professional area.”

Mahoney, who also teaches Strategic Social Media, stresses the importance of getting students not affiliated with media to get invested in it, especially with the arts. “There’s no industry out there that’s separate from the arts these days. With social media, every single industry, every single business, every single company has their foot in the door,” said Mahoney. “So it’s really important that you’re an accomplished practitioner whenever you graduate. So, a little video production experience can’t hurt anybody.”

The awards ceremony started at 7:20 p.m. and categories up for grabs for the 22 films submitted were Outstanding Use of Dialogue, Outstanding Use of Prop, Outstanding Showcase in Genre, Outstanding/Judges Nomination, Third Place, Second Place and First Place. The first-place winning film was “Too Late” by the team The Honors System. Members of this team were honors college students Michael Nangle, Brendan Lordan, Mark Gutierrez, Courtney Rothman and Cameron Ducey. The Arts of West Chester University of PA YouTube channel has a playlist of films submitted to this year’s competition.

The ceremony itself was hosted by senior communication studies major James Jackson.

Last year Jackson’s friend was enrolled in Sawyer’s Event Planning class and, when they needed a host, recommended him for the job. “Once I figured what it was and everything that it encompassed,” said Jackson, “I realized how great of an opportunity it was. Not just for me, but for all the filmmakers and all the talent [at WCU]. So I got more involved. I helped with the proposal, and decorations and everything else. It just turned out to be such a great event.”

Jackson went on to say his favorite part of the event was getting to see the results. “I’m a huge result and finished product guy,” said Jackson. “To see it go from the beginning of April, end of March, where we barely know what we’re doing to coming in here. All the decorations are up, we have professional slideshows and professional judges come out … Seeing the end result and seeing how much talent, how [many] creative minds we have not only at West Chester University but at Cheyney University as well.”

For students who did not get to partake in the 48-Hour Dub-C Film Race this semester, students and faculty involved this year encourage increased participation. 89 filmmakers worked on 2018’s event, and with WCU planning to include teams from the PASSHE Philadelphia campus with a possibility of inviting another campus to take part in the race, the numbers are expected to increase. For more information about the event, Mahoney and Sawyer can be reached at MMahoney@wcupa.edu and KSawyer@wcupa.edu.

Halle Nelson is a fourth-year student majoring in communication studies with minors in English literature and deaf studies. ✉ HN824858@wcupa.edu.