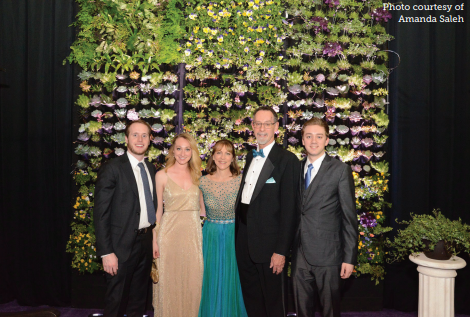 On Saturday, April 7, The WCU Foundation celebrated the 35th annual Presidential Scholarship Community Gala in Hollinger Fieldhouse. This event awarded merit-based scholarships to three freshmen and served as a celebration and display of appreciation to all of the donors.

“Emerald Gardens: Growing a Sustainable Future” was the theme of the evening. Valet parking was available and golden gates served as the entrance. Plants and flowers filled the room and one of the walls was adorned with succulents. The attendees were a mix of donors, faculty and students, including those from the Friars’ Society and SGA.

President Christopher Fiorentino kicked off the black-tie event and shared that all of the plants that were not up for auction would be for university use. In the coming weeks, the plants will be planted all over campus.

This event is considered the premiere black-tie affair of Chester County. Slow jazz music played in the background before live entertainment was provided by The High Street Harmonics and Legacy Entertainment.

Cocktail hour started the evening with top-shelf liquor while servers came and passed out hors d’oeuvres such as small pastries filled with salmon mousse, pea chantilly and rabbit rillettes. Attendees crowded around a cheese board and bid on items such as electronics, vacations and home decor. On the other side of the room, people dined on shrimp, oysters, crab and caviar. The main meal included plant-based options and local ingredients such as Kennett Square mushrooms.

Kaplan’s Jewelry began the evening with a Champagne & Diamond raffle which auctioned off a pair of diamond earrings. ARAMARK and MacElree Harvey, Ltd were diamond sponsors. Representatives from each of these organizations had the chance to share their remarks at the beginning of the evening.

This year, the scholarship was given to three freshmen in the honors college who just so happen to be friends. This year’s academic scholars are Jennifer Knerr, Madison James and Cameron Ducey.

Knerr, a special education and early grades prep major from Slatedale, Pa. said that this award was a dream come true.

“I have been so blessed with my scholarships. I really don’t know if I would have been able to attend college had it not been for this scholarship money. I knew that I would have to work really hard in high school so that it would pay off,” she said.

James, a biology pre-med major from York, Pa. and member of the track team was so honored to receive the award. James says she is fortunate that she can relax now and doesn’t have to worry about how she is going to pay for her education. “My parents were so happy and proud of me because now I don’t have to really work and now I can use my savings to pay for undergrad,” she said.

Ducey, a nursing major from Eldersburg, Maryland, is relieved after receiving this award, and plans on using the money allotted for her undergrad towards her graduate degree. She plans on becoming a nurse practitioner.

The co-chairs of the event were Sally and Robert Smith, class of ‘72. The Smiths also established the Robert and Sally Smith Business Scholarship for outstanding business majors. Before serving as the co-chair, Mr. Smith was a member of the CBPM advisory board, WCU Alumni Association board of directors and a senior vice president at Dassault Falcon.

The event could not have been done without the help of The Golden Rams Society, who served as hospitality staff. Catering was provided by New Street Catering.

Amanda Saleh is a fourth-year student majoring in communication studies with minors in Arabic and journalism. ✉ AS821872@wcupa.edu.