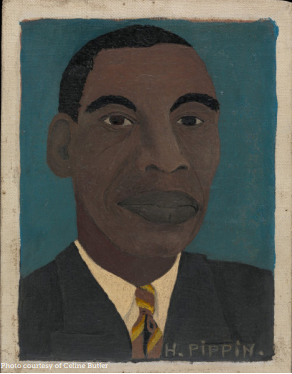 There were two things that Horace Pippin could never forget: suffering and sunset. While hardship was an ever-present theme in the West Chester native’s life, the painter executed scenes of war, prejudice, family and community with both courage and insight, revealing that he saw life as equal parts in both pain and beauty. Though he lacked an extensive education and had limited access to art materials as a child, Pippin earned a name amongst the greatest artists of his time and distinguished himself as the most famous self-taught African American folk artist. It was his depictions of our local streets and buildings that helped him rise to fame. He immortalized sites such as Everhart Park and the Birmingham meeting house with colorful brush strokes that portray our town’s infamous charm and character.

Horace Pippin was born in West Chester on Feb. 22, 1888 to a family of domestics and laborers. Pippin’s grandparents were slaves, giving him an intimate look at racism in the United States from an early age. He moved to Goshen, New York at the age of three and attended a segregated one-room school. At the age of 10, he won an art contest advertised in a magazine and received a box of crayons, paint and two brushes. These materials served him well, and he sketched horses from his local racetrack and biblical tales on worn scraps of muslin. In 1899, he and his family moved to Middletown, New York, after Pippin’s mother took a position as a domestic. Unfortunately, she fell ill in 1903 and Horace put his education on hold in order to better support her. He entertained various jobs until her death in 1911, after which he moved to Paterson, New Jersey to work as a mover, hotel steward and iron molder.

In 1917, Pippin left his life in Paterson behind and enlisted in the 15th Regiment of the New York National Guard. He fought in the African-American 369th Infantry, nicknamed “Harlem’s Hell Fighters.” It was his time in the war that inspired much of his works, as he later remarked that “the war brought out all the art in me.”

One year after enlisting in the fight, Pippin was shot in the right shoulder by a sniper, crippling the arm that he had used to create his art. In 1919, he returned to the United States with an honorable discharge and a disability pension. One year after his return, he married a laundress named Jennie Ora Fetherstone Wade Giles and moved into her home in West Chester, PA, making a return to the town that would serve as an inspiration for his future pieces.

Pippin did what odd jobs he could with the limited movement in his right arm and began to paint cigar boxes. In 1925, Pippin tried his hand at pyrography, burning designs into wood with a heated metallic point. His first post-war work was created in 1930, and he managed to paint by using his left arm as support for his right hand. Art became a therapeutic outlet and he combined both wood burning techniques and oil paints to create a style both deliberate in intention and unique in execution. He created his first large-scale illustration, “The End of the War: Starting Home,” as an anti-war protest. The piece, dated 1930-1933, captures the horrors of war in the form of soldiers fleeing from trenches, airplanes burning and explosions in the sky. Other anti-war paintings joined his collection in the following years and include pieces such as “Shell Holes” and “Observation Balloon” and multiple versions of “Holy Mountain.”

After his work was featured in a home county show, Pippin’s career took off. His paintings caught the attention of renowned artist N.C. Wyeth and art collector Christian Brinton. The pair decided to give Pippin his first solo exhibition at the West Chester Community Center in 1937. His paintings depicting African American life were particularly celebrated, with illustrations like “Domino Playing” painting a vivid portrait of what it meant to grow up black in the United States. Other prominent works include renderings of historical figures such as abolitionist John Brown and Abraham Lincoln. His work was displayed in a traveling group exhibit with the Museum of Modern Art in 1938, and Pippin received well-deserved recognition as a key contributor to the outsider art movement. Before his death in 1946, he managed to create some 140 pieces. His unique aesthetic and sense of self helped him to become the first nationally acclaimed African-American artist, making great strides for artists and African Americans alike.

When asked about what made him a great painter, Pippin put it bluntly: “I paint it exactly the way it is and exactly the way I see it.” Pippin’s keen sense of observation allowed him to depict the people, places and parables that were important to him with vivid intensity, including sites here in West Chester, PA. In his 1946 painting titled “Man on a Bench,” the artist detailed an African American man sitting on a red bench in Everhart Park. The color red had never been used for benches in this park before and the Friends of Everhart Park donated a red bench as a tribute to his legacy. The next time you pass through Everhart Park, take note of this brightly colored bench. Though it wasn’t there in his time, Pippin’s creative vision can inspire all of us to see the world with a little more color.

Celine Butler is a second-year student majoring in psychology with minors in French and Fine Art. ✉CB869017@wcupa.edu.