Over 100 protesters detained in Armenia as prime minister takes power 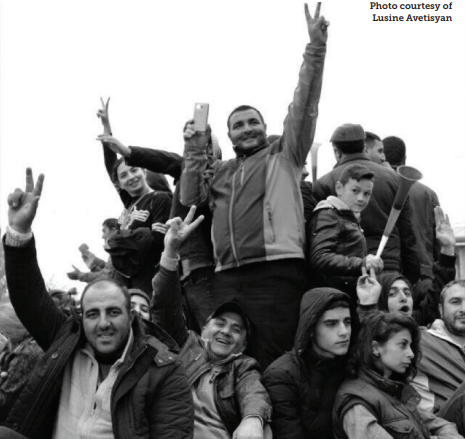 On Tuesday, April 17, Armenian President Serzh Sarkisian was unanimously chosen by the ruling Republican Party of Armenia (HHK) along with the Armenian Revolutionary Federation (Dashnaktsutyun) to become the nation’s new prime minister with expansive powers and without a term limit.

With his term ending, he went back on that promise and decided to continue his rule. Sarkisian disputed claims of him breaking his promise by saying his previous statements about not seeking the position of prime minister were “taken out of context,” according to RadioFreeEurope.

Peaceful protests began on April 13, but things began heating up when opposition leader Nikol Pashinian told supporters to block off the front of government offices on April 19 in Republic Square.

During a rally on Republic Square, Pashinian urged Armenian citizens to pressure local authorities and police into making statements in support of the movement.

A group of around 1,000 protestors led by Pashinian marched for four hours through Armenia’s capital, Yerevan and stopped in front of city hall, blocking it off. This action forced Sarkisian to delay his first cabinet meeting for several hours.

The opposition leader also called for sit-ins inside government buildings and offices “so that even Serzh Sarkisian himself has no place to sit.” Pashinian has consistently urged protestors to remain peaceful.

Police spokesman Ashot Agaronyan stated that 106 demonstrators were detained in the square after security moved in to push the protestors back and clear up the entrances to the government buildings.

According to RadioFreeEurope, he stated “As of 1:30 p.m., 106 people have been taken to police stations. If they are not released in three hours, it means they are suspected of committing offenses.”

HHK called upon Pashinian and the protesters to engage in dialogue, explaining that it would be “politically shortsighted to continue to abuse the government’s political will and patience.”

The United States and Russia both expressed to Armenia’s government and its people to exercise restraint and to avoid violence or breaking any laws.

Marta Shakhazizian, a 24-year-old Armenian-American who lives and works in Armenia on a Fulbright English Teaching Assistantship, has been participating in the protests. Here, she offers her thoughts over an email exchange:

“I have never experienced energy like I have these past several days in Yerevan. Today is the ninth day (and counting) of what increasingly seems to best be described as less of a protest and more of a revolution.” She goes on, “What is so beautiful to me is how inclusive the movement has been. The streets are flooded with Armenian people and include disabled folks, elderly people, young children, university students, IT workers, construction workers and everyone in between.”

She then explains the current situation on the ground and what day-to-day life has been like in recent days, “The protesters have taken up space and made noise in a variety of powerful and resourceful ways. People are blockading the city’s main streets by linking arms, sitting in the middle of the streets, and blocking the streets with large objects such as trash cans and benches. Drivers in taxis, buses and cars honk their horns to match the beat of the chants such as ‘Join us!’ and ‘Serzh is a liar’ and ‘Walk up against Serzh’. Cars drive by, playing music and toppled with teenagers and young adults waving Armenian flags while honking their horns and cheering. Just today [April 21] I was in the metro station when everyone on the escalator started chanting, clapping, and cheering in support of the protest. Many stores and restaurants are closed as the movement has called for a work strike. Many students at top universities aren’t going to classes and are instead fighting for their rights on the streets. People who have no choice but to work at their jobs can all be seen watching the livestream of the protest, their eyes glued to the screen.”

“As a diasporic Armenian with family in both America and Armenia, I am hopeful that this movement will not only show Armenia’s government but the world that Armenian people are a forced to be reckoned with. Though change is never instantaneous or simple, I can confidently say that Armenia has never felt like this before, and will never be the same again.”

Shakhazizian made a point to mention how as every day goes by, more and more people are joining in the protests as they grow larger in size and scope.

Alex Shakhazizian is a fourth-year student majoring in political science with a minor in journalism. ✉ AS823512@wcupa.edu.