WCU raises over $35,000 through Relay for Life event 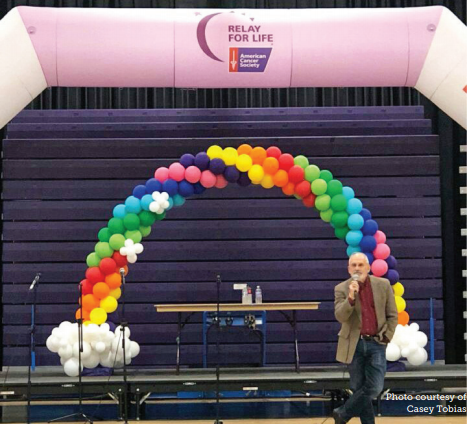 Colleges Against Cancer hosted their 13th annual Relay for Life from noon to midnight in Hollinger Fieldhouse on Saturday, April 21. According to their Facebook page, they raised $35,350 “to aid in the fight to end cancer.”

The money raised for Relay for Life goes directly to the American Cancer Society, a nationwide voluntary health organization founded in 1913 whose mission is to “save lives, celebrate lives and lead the fight for a world without cancer.” Visit their website at www.cancer.org for more information on ACS.

Colleges Against Cancer (CAC) President Kasey Dougherty explained how “near and dear” Relay for Life is to her heart. “My brother was diagnosed four years ago, and he’s still battling,” Dougherty said. “He started with Hodgkin’s lymphoma, and now it’s unidentified because it’s kind of difficult to cure.”

Dougherty talked about how her brother “wouldn’t have had the chance that he does” without events like Relay for Life. According to Dougherty, some of the donated money is dedicated to cancer research, and her brother has been part of six research studies over the past few years.

She also brought up a couple of other ways Relay for Life supports people with cancer, such as offering them rides to get treatment and Hope Lodge, which provides them with temporary housing if they do not live near hospitals.

“It gives them the opportunity to get the best help possible,” said Dougherty.

Sykes Student Union Director Dave Timmann has served as the advisor for CAC for 13 years. As both a survivor himself and someone who has lost multiple family members to cancer, Relay for Life is an important cause to him.

Timmann emphasized how proud he was of the students responsible for organizing the event and wanted to congratulate them on a job well done.

“What makes it special each year, and this year’s no different, is the amount of work that the people in red shirts put into doing this,” he said.

He also noted that even though the turnout of people wasn’t incredibly high, those involved still raised an impressive amount of money.

There were a variety of activities held throughout the day and night, including yoga, Bingo, Knockerball, hair donations, the newlywed game, a lip sync battle and a photobooth.

Numerous campus groups performed as well, including the High Street Harmonix, Under A Rest, Deep Dish Pizzazz, the Irish dance club, the dance team and the cheerleading team.

In between the games and performances, there were also several ceremonies. After the opening ceremony at noon, there was the survivor and caregiver ceremony at 5 p.m., the luminaria ceremony around 8 p.m. and the “fight back” ceremony at approximately 8:30 p.m.

Toward the end of the night, the winners of the raffle prizes were announced. Raffle prizes ranged from a signed Radko Gudas jersey to restaurant gift cards to two weekend passes for Firefly Music Festival.

CAC Survivorship Chair Corey Beans described his favorite part of Relay for Life, which was hosting a dinner for the cancer survivors and caregivers in attendance.

Beans enjoyed being able to talk to them one-on-one and listen to their stories. He mentioned that this bolsters his interactions with them post-Relay for Life when he sees them around campus. “That’s a great feeling,” he said. “I appreciate them because they’re the reason why we’re here.”

According to Beans, one of CAC’s goals going forward is to spread awareness and to “get more involvement from other organizations that should be here.”

“Our job next year is to educate people on what Relay for Life is and why it’s such a great cause,” said Beans.

Casey Tobias is a fourth-year student majoring in communication studies and women’s and gender studies with a minor in journalism. ✉ CT822683@wcupa.edu.

One thought on “WCU raises over $35,000 through Relay for Life event”