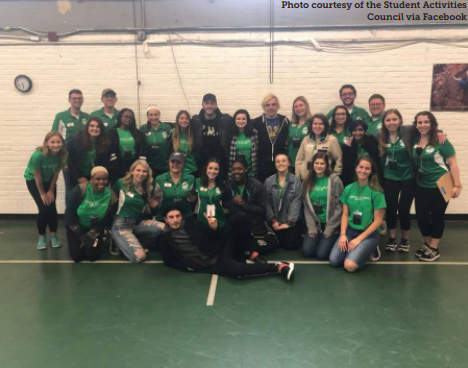 Flashback to Copenhagen, Denmark circa 2009: The popular alternative band New Politics was planting its roots beginning with David Boyd, lead vocals and guitar, and Søren Hansen, vocals and bass. Fast forward to Brooklyn, New York in 2010 and the band found its final member, Louis Vecchio, completing the trio with his skilled percussion and vocals.

New Politics visited West Chester, Pennsylvania on Thursday, April 19 to perform in Hollinger Field House for WCU’s 2018 spring concert. During their stop, the extremely friendly and eccentric group sat down in one of Hollinger’s empty gymnasiums for an interview with The Quad. In a makeshift space that could have easily been distant and echoey, Boyd, Hanson and Vecchio filled the room with their warm, personable demeanors, laughing, joking and singing “Kumbaya” as we sat down in a campfire-style circle of folding chairs in the middle of the empty basketball court.

Knees to knees, the interview commenced. First up: How does New Politics feel about reinvention in the music industry; do they feel like they’re reinventing, or like they don’t have to?

Hanson jumped right in: “I think that as a band, you have to reinvent yourself … it’s very easy to start being afraid of breaking down the walls—it’s very easy to build the walls around what you think you are.” He went on, “At the same time … a good song is a good song, and you don’t necessarily need to mess with that if it’s already there … that’s one of the most tricky things, and one of the things that nobody will ever really figure out. God, that sounded smart,” he finished humorously.

Boyd broached the complexity of reinventing yourself without trying to. He posed the question, “How do you develop, and how does one do that in a natural way?” He answered: “You just have to dive in deep.”

Following this concept of reinvention, Hanson shared a little bit about their process as they move toward their next album. He detailed that they got “new management, [a] new label, new publishing—everything.”

Boyd jumped in, talking about how their next record will be their “most innovative.” He also assured that these changes are “not with any bad blood … [it’s] the first step of naturally exactly doing what we’re talking about … reinventing.”

Next up: Do they have any advice for college students searching for satisfaction in their lives, feeling like “enough is never enough”?

The trio was unanimous: They’re “always searching”; it “never goes away.” Hanson added, “Of course you’re going to want to get to the top … it’s human nature, wanting …” “Surviving,” one of them interjected.

“Yeah, surviving,” Hanson went on. “Make bold moves; dream big … go for it. And sometimes it doesn’t work, and it hurts, but at the same time, when it works, it feels really good.”

While Hanson finished this thoughtful statement, Boyd and Vecchio poked at and quietly teased each other. After being called out, Vecchio smiled: “I have trouble standing still—this is why I’m never in the middle between these two.”

Finally, onto the topic of touring: What is it really like behind the scenes?

Vecchio said, “There’s two parts of obviously being in a band. One of them is writing songs and the other one is performing and being on the road … these guys are what I call “studio nerds”—they’ll sit in the studio for hours. I have a little bit of ADD where I have to move, so touring for me … I play drums, so it makes perfect sense.”

Hanson mentioned one of his favorite parts of touring: “It’s some of the cool places we’ve been. We’ve been to Russia, we’ve been to Japan …” “Oh, Canada,” Boyd interjected. “You just get to see different cultures—it’s wild,” Hanson finished.

However, touring isn’t all fun and games like the pictures make it seem. “It’s hard to see the schedule aspect … we love what we do, don’t get me wrong, but six days in a row when you’re traveling in a van or a bus … it gets crazy,” Vecchio said.

Boyd added, “There’s always going to be someone at some point on the road—” “That snaps,” Vecchio finished. “Or has incredibly amazing B.O.,” Boyd went on, grinning. “Sometimes you don’t get to shower, sometimes you’re too tired or sometimes it’s like you have meet and greets … so there’s also a lot of work … I mean, 90 minutes on stage Søren and I are singing, so you have to prep.”

After Vecchio joked that Boyd just kicked him to the curb, Boyd responded, “I was going to get to the drummer. He has to go through a bottle of Jack.” Through the laughter, Boyd went on, “No, I’m joking,” proceeding to make a crack about Vecchio’s ripped jeans.

Hanson finished the interview fittingly, pointing out the basketball hoop at the end of the court we were seated on. “I’m just going to say the last funny comment here,” he said, “when you look at [the basketball hoop], it’s the same colors as Dunkin Donuts, but it says ‘no dunking.’”

After wrapping up the interview, the trio proceeded to do a meet and greet with the students who worked to organize the event; just a few short hours, and the concert would begin.

By 9 p.m., like moths to the stage lights, around 100 students crammed against the guard rails surrounding the performers, ignoring the dozens of yards of free space around them. The banners celebrating West Chester University’s sports teams faded as the lights focused solely on the red floral patterns adorning the stage, matching the cover art for “Lost in Translation.” Three silhouettes entered amidst screams from the fans, and with no hesitation, New Politics began singing.

Literally jumping from one song to the other, Boyd, Hansen and Vecchio would have fit just as comfortably on the padded gymnasium floors given the acrobatics Boyd performed on stage. Despite the smaller crowd, New Politics filled the empty space with their irreplaceable charisma. A particular breakdancing solo, begun by Boyd through a casual backflip off a kick drum during “Love is a Drug,” left fans particularly excited.

About halfway through the aforementioned interview, we began to joke about “simpler questions”: things like “favorite animals” and “favorite colors.” With a knowing smile, Hansen looked to Boyd, simply stating, “His favorite color’s the color green, yeah?” While we heard previously the song “Color Green” from their album “Lost in Translation,” the context was added during the actual concert.

“My newborn, he … he’s almost turning one,” said Boyd onstage during one of the rare moments of calm. “This song, it’s dedicated to him. I hope you enjoy.”

During another somber moment, the three members took a pause to denounce gun violence in the United States—a well-timed comment, given the “Dub-C for our Lives” walkout that was set to happen the following morning.

This comment preceded their performance of “One of Us,” a song exemplifying equality “of skin color, gender and sexual identity,” according to Hansen. Vecchio stood up from his drum set, pointing to the crowd, as Hansen sat behind a previously hidden keyboard. This moment of the set defined the value of witnessing live performances, as certain regularly sung lyrics became a mix of spoken and sung word. A pause in the music for the specific line, “Everybody’s skin is different, not their bones,” succinctly summarizes the entire message of the set.

The performance was enchanting, and it was hard not to get swept out of Hollinger and into whatever world their music brought. After their set ended, I managed to catch a guitar pick Hansen through into the crowd—a keepsake I’ll be sure to keep safe.

To listen to the entire 14-minute interview Lauren Detweiler and Max James conducted with New Politics, you can visit wcuquad.com.

Lauren Detweiler is a fourth-year student majoring in English writings with a minor in communication studies. ✉ LD838069@wcupa.edu.

Max James is a third-year student majoring in communication studies with minors in creative writing and web technology. ✉ MJ853459@wcupa.edu.