Popular professor battling for his life: A call to action for Dr. Viorel Nitica 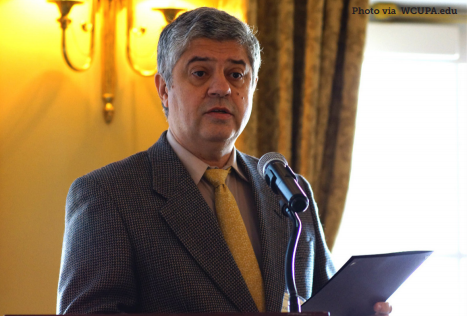 To the administrators, faculty and student body of West Chester University of Pennsylvania:

This is a call to action regarding our dear professor Dr. Viorel Nitica, a senior faculty member in the Department of Mathematics at WCU. Recently, Nitica had been diagnosed with a malignant brain tumor (glioblastoma) and underwent surgery to remove it quickly.  Thankfully, the operation was a success.

However, because of the nature and location of the tumor, Nitica will now have to undergo very costly treatment to prevent resurgence and remove any remaining cancer cells. The treatment protocol involves chemotherapy and proton therapy with an estimated cost upwards of $130,000. The unfortunate predicament here is that Nitica’s insurance plan with Highmark Blue Shield will not cover the cost of the proton treatment.

In the expanse of my academic career, I’ve taken many courses taught by Nitica. He has not only been my instructor, but also a mentor, a confidant and more importantly, a close friend.

Earlier in the semester, I had noticed Nitica’s sudden absence. Much to my dismay, I learned that Nitica had developed severe headaches, and after seeing his doctor, was diagnosed with a tumor that required a prompt operation. The news was startling and incredibly worrisome.  I reached out to him to check on his condition. It was a great sigh of relief to discover that his surgery went well. Despite the gravity of the situation, things looked hopeful. He was undergoing treatment and remarked in our emails that he hoped to return during Summer Session I. In the subsequent weeks, some discussion began to surface in the math department regarding Nitica’s treatment, its cost and the willingness of his insurance to finance it.  It was clear that bigger hurdles await and my friend needed all the support he could get.

I could discuss the achievements and merits of Dr. Nitica as a scholar in his field. He has written books on dynamical systems and ergodic theory, has papers published in reputed mathematical journals, received awards, including two NSF awards and the prestigious West Chester University Trustees Award, but none of that is really the point. His accomplishments are not why this is being written.  West Chester University and its community have a unique position in higher education, and this is only possible because of the unique character of its faculty and everyone that’s a part of it. Nitica embodies that character in its full sense.

I’d rather talk about sitting in Nitica’s office, eating gyros and souvlaki with him from the Greek Food Truck while trying to understand basic Measure Theory and hearing his hilarious stories about his mandatory military service in Romania. I’d rather talk about his dead-pan humor, him sarcastically calling someone a “genius” when they reached a trivial result in a proof, telling our Real Analysis class that instead of an “open book” test, we can have an “open mind test.” There are quite a few stories I can share where he both amused and inspired me.

Anyone who knows Nitica or who has ever taken a class with him, who has ever sat 10 minutes in his office knows his biting wit, his generosity and his kindness, not to mention, his amazing way of making even the most difficult ideas in mathematics clear and accessible.  He is one of the most distinguished personalities I have had the honor of knowing. He is truly one of a kind.

Without his presence, we would not only lose an incredible communicator of mathematics, a highly competent scholar and a respected member of faculty; we would lose a good friend and his family would lose a father and husband. That’s more significant than anything else. We don’t know if his treatments are going to work, but they’re the best shot we have and we should do whatever is in our power to ensure that Nitica will receive the treatment he needs.

Since Highmark Blue Shield offers plans to the faculty and employees of WCU in conjunction with the university, I ask the university’s administrators to help grant sufficient funding for Nitica’s treatment by whatever means available, so that he can return to us as healthy as possible. Even if none of this has provided compelling reasons, please consider this out of the sake of our humanity.

We will request university administrators to link access to it through the West Chester University website.  This will be a supplemental source to help Nitica and his family cover expenses that may arise.

I thank everyone deeply for taking the time to read this. I encourage students and faculty that share my sentiments for Nitica or anyone who feels a strong sense of compassion to convey your support for

Nitica in any way that you can. If you’re a student and would like to write a letter in favor of Nitica, please do so.

A GoFundMe campaign has been established and is administered by Nitica’s wife, Ana.

Quazi Haque is a student at West Chester University. ✉ QH778526@wcupa.edu.

One thought on “Popular professor battling for his life: A call to action for Dr. Viorel Nitica”