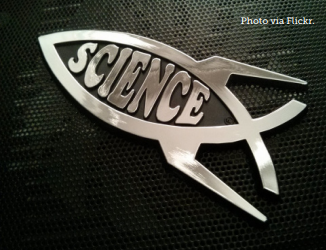 During this semester I’ve experienced some people who perceive that science and faith are incompatible. Therefore, I decided to explore this and go to a Science and Faith Conference outside of Philadelphia this past weekend. This article will explore the pros and cons of evolution and then pose an alternative to bring up discussion.

First, all scientists have their own personal beliefs about the material world and a higher power or lack thereof. Many of these beliefs cannot be proven empirically. Beliefs that answer questions like:

The Science and Faith Conference delved into the science of human history, specifically the scientific evidence for and against evolution. Evolution has three meanings: Change over time, changes within a species (microevolution) and changes from one species to another (macroevolution).

Evolution as changes within a species or microevolution describes what happens when breeders decide they like a specific trait so they breed animals with that trait until it is found in the whole population. For example, if a sheep breeder wanted a woollier flock, they would breed the most woolly sheep and separate the rest, then the wooliest of those would be mated, and so forth until the breeder had the woollier flock. The intelligent breeder guided the change in their flock. Darwin describes the same process but unguided via natural selection. He states that a frigid winter would kill off the less wooly sheep, therefore only the woolliest would mate and reproduce. If this occurred several winters in a row, the flock would be more woolly. Again, there is no disagreement on microevolution because there is ample historical and scientific evidence to show its validity.

The first two types of evolution are part of a science called nomothetic science that studies the regularities of nature. All of these ideas like cellular structure, gravity, intermolecular forces and movement of objects or light are studied many times in various contexts so general statements are valid and useful. The third type of evolution is quite different because we cannot reproduce the Big Bang, or the first cell. This type part of historical science studies irregular occurrences. Because these occurrences only happen once, it is not outside of the realm of possibility for the regularities to be broken, but let’s explain what the third type of evolution is first.

Evolution as changes from one species to another or macroevolution describes the change from apes into humans, or a common ancestor diversifying from a single cell into the variety of organisms described in the Cambrian explosion. Darwin attributed this phenomenon to natural selection, an unguided process in which organisms must adapt to their environment by random mutation while only the best suited for the environment survive and reproduce.

Despite what is socially acceptable to think, evolution is dealing with questions that are historical exceptions. While nomothetic science explores regularities like how strong the intermolecular forces are in water, it ignores exceptions when the regularities are not met. For instance, in humans, evolution is stating that we are not an exception; we are here by a chance accident.

If we look at human evolution, as Dr. Raymond Bohlin stated in his talk at the conference, the common ancestor found to bridge us and chimpanzees is about 6-8 million years old. Currently humans have 16 physical differences from the ancestor, not including unknown mental, emotional and spiritual differences.  It takes approximately one million years for a mutation to arise in a population, then five million more to have it in the whole population. As more mutations are added, it takes more time due to compiling small probabilities.

Let’s unpack that more. For something to be designed intelligently, it cannot just be unlikely. For instance, each mountain is very unlikely to form exactly like the ones next to it and others around the world, but most of those unlikely traits could be formed by natural (unguided) processes like uplift and erosion. However, if you look at Mount Rushmore, it also follows a pattern of meaning, namely four faces of American presidents. Those could not have formed from natural processes like uplift and erosion; it was obviously formed by an intelligent agent, humanity. Mount Rushmore has specified complexity: complex because it is unlikely, specified because it matches an independent pattern.

Considering the discussion above, we haven’t arrived at a conclusion, but there is definitely more data to sift through before making a decision. If you have any questions or would like to discuss this topic more, please email me and we can start a discussion. Truth is most important.