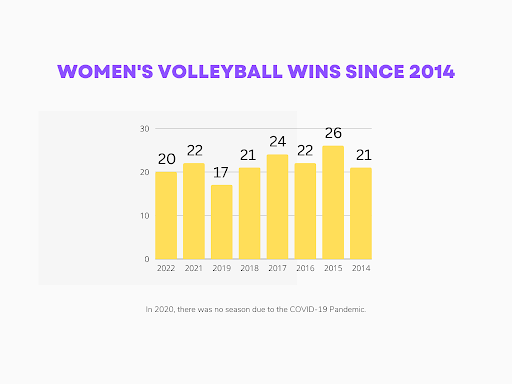 A few weeks ago, the West Chester women’s volleyball team concluded their 2022 season, one that can be considered a success in numerous ways. The Golden Rams’ tallied 20 victories on the season and earned a Pennsylvania State Athletic Conference (PSAC) Tournament berth, but it was not solely the victories that made this year a positive one for Head Coach Kassie Bellaver and her Golden Rams.

With a 20-11 record, West Chester eclipsed the 20-win mark once again. It was the seventh time in the last eight seasons that Bellaver’s squad has amassed 20 victories. It is this consistency that tends to keep WCU in contention for the PSAC Championship year after year. After finishing with an 8-6 record in conference play, West Chester qualified for the PSAC Tournament as the fourth seed in the East. Although they were eliminated in the quarterfinals by Shepherd University, making the tournament was a great accomplishment for this Golden Rams team that remains filled with youth and potential.

In the midst of these on court successes, Coach Bellaver expressed her praise for her team in other areas as well.

“We did accomplish our goal of reaching the PSAC Tournament, but beyond that, I believe the athletes were successful with balancing athletics, academics and involvement with our community service activities,” Bellaver said.  “I’m proud of the way our team represented WCU on and off the court this semester.”

The efforts of Dreisbach, Byrne and Lewis cannot be overstated in terms of WCU’s success this year, but Coach Bellaver was quick to credit her entire roster for their accomplishments.

“This was one of the best teams I have coached in the sense of camaraderie and teamwork,” Bellaver stated. “All eighteen athletes made an impact on the court, and our sideline was full of energy and spirit during every match.”

As we move towards the new year, Bellaver already has her sights set on the 2023 season.

“We built a strong foundation this fall, so our goal is to improve individual skills during spring workouts and continue to find balance and grow closer as a team,” Bellaver shared. “It is that sense of trust and comfort with each other on the court that will help us achieve our goal of a PSAC Championship.”

It is never too early to start thinking about next season, and Coach Bellaver returns a very talented group of women with more experience after the 2022 season. There is no doubt she will continue to build on the momentum of this year and have her team ready for the 2023 season that once again comes with PSAC Championship aspirations.

Tommy Anderson is a third-year Communication Studies Major with a Minor in Journalism.