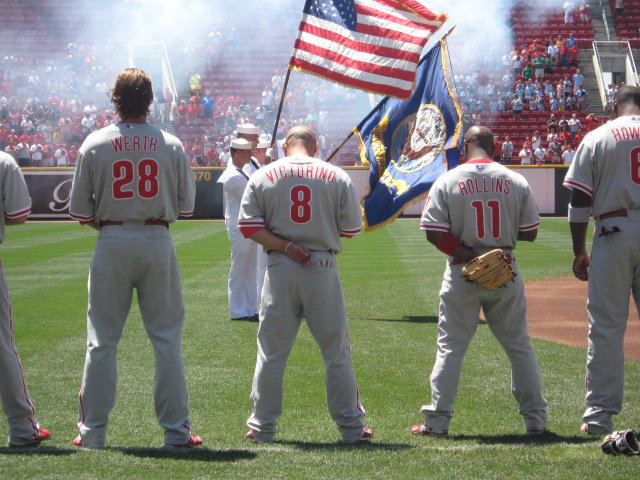 That iconic picture of Brad Lidge and Carlos Ruiz will forever be ingrained in the fans of the Philadelphia Phillies. The pure joy radiating from them as they collapsed by the mound is the same that thousands of people experienced right along with them. This was an especially meaningful championship because their victory over the Tampa Bay Rays ended a 25 year championship drought for all the Philly major sports teams. The last time anybody won was the Sixers in 1983.

When discussing the Phillies and their World Series triumph, Philadelphia native Pamela Mullen said that “after living through the disappointment of watching them fall short in 1993, I didn’t think I would ever get to see them win the World Series. That final strike out and Brad Lidge’s reaction is the definition of Philadelphia’s never count us out attitude.”

As is customary for every Philadelphia championship, fans raced all along Broad Street knocking down traffic signals and shooting off fireworks. Police even had to intervene as the celebration continued into the next morning.

And as pitcher Zach Eflin secured the first save of his career against the Astros on Oct. 3, Phillies fans everywhere got to rejoice in that same feeling that they haven’t been able to experience in 11 years. Seeing the way that the players celebrated in the clubhouse after the game, it was clear that this ball club had the longest playoff drought in the National League.

From disappointing season after disappointing season, through the ups and downs, the Philly faithful continued to show out to the ballpark. Every season began with the hope of playoffs in the distance but every year it seemed like they found a way to come up short or just fall flat on their faces.

There was the extravagant free agent signings, the managerial changes, the hope that luck would finally be on their side. All of this optimism was moot until March 2019 when the Phillies, yes those Phillies, were able to sign one of the biggest names in baseball in Bryce Harper and their team began to coalesce.

After hearing the news that Bryce Harper was coming to the City of Brotherly Love, fans everywhere began to realize that something special was brewing at Citizens Bank Park. The Phillies aren’t well known for spending top dollar for free agents so to see them spend $330 million to lock up one of the best players in the league for 13 years was a sign that the team was ready to compete.

But now with all of these marquee additions that they made paying off and their first trip to the playoffs in 11 years underway, people who lost interest in the team are finally starting to show an interest again that they haven’t had since the World Series.

“I forgot what it was like to experience playoff baseball,” said WCU student Joe Gill.

This is a sentiment that lots of fans share as the Phillies have kind of taken a backseat due to the recent successes of the Eagles and Sixers. But now with the Phillies rejoining those teams as playoff contenders, they’re right back in the public eye. Enjoy this Red October Philly fans.

Colin Bradley is a third-year English major with a minor in journalism. CB953277@wcupa.edu