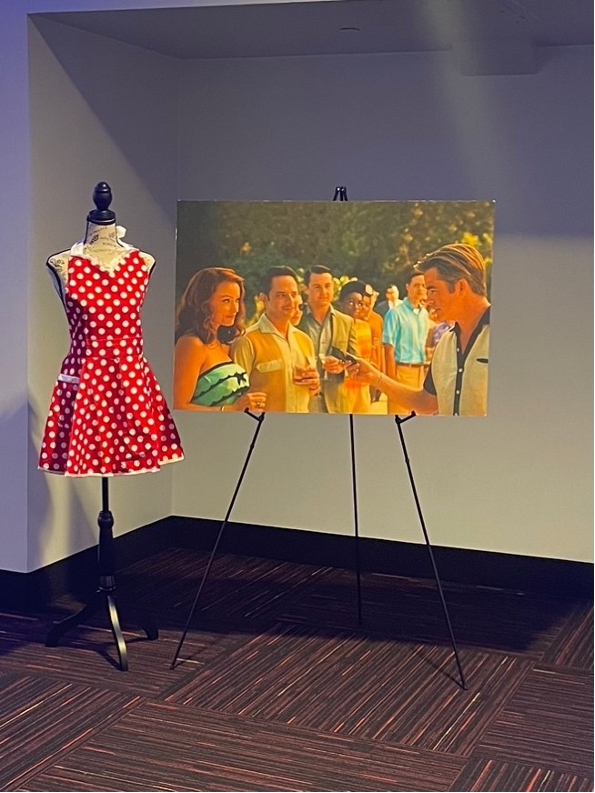 The long-awaited movie by Olivia Wilde after her directorial debut “Booksmart” in 2019, “Don’t Worry Darling,” is a psychological thriller starring Florence Pugh and Harry Styles as leads Alice and Jack Chambers, respectively.

The cast continues with Wilde herself, Nick Kroll, Chris Pine, Gemma Chan, Douglas Smith, Kiki Layne, Asif Ali, Kate Berlant and newcomer Sydney Chandler. This film takes place in 1950s suburban California, set in a small town named Victory. Alice and Jack are as happy as can be, Alice being a stay-at-home housewife, and Jack works for Victory, the same company that created the small town they reside in.

Alice begins to experience odd hallucinations that do not seem to make any sense to her. She confides in Jack as well as her best friend Bunny, who lives next door, but both believe her to be crazy. They say Alice is acting like Margaret, Layne’s character, who has been turned into an outcast and shunned by the community because of her similar hallucinations. Although faced with skepticism by her friends, husband and the leader of the Victory project himself, Frank, who is played by Pine, Alice will stop at nothing to get the answers to her questions.

I had the privilege of seeing this movie at a special premiere screening on Monday, Sept.19 at the IMAX Theater in King of Prussia, Pennsylvania. Along with admission to the movie, I received a free movie poster, as well as a livestream look at the Q&A that was taking place at the New York City premiere of the film with the cast. The special premiere also had a dress on display that was used in the filming of the movie.

If you are familiar with me or even my writings here at The Quad, you would know I am a big fan of Styles. Keeping up with him and his endeavors, I have known about this movie for two years now, following it via set pictures released online during the peak of the COVID-19 pandemic in 2020. I was aware of a script leak two years ago, but I avoided reading it, as I wanted to be surprised when it came to theaters, and boy am I glad I waited. This movie is a rollercoaster of emotions towards the second half, but this is a spoiler free review, so go see the movie, and then we can chat about it.

Pugh’s powerhouse performance was no surprise here. The Oscar-nominated actress has made a name for herself over the past couple years, with Wilde specifically stating that Pugh’s  performance in “Midsommar” is what got her the role offer for Alice. Wilde told Variety: “I loved the film, but I loved her. I was just like, ‘Well she’s extraordinary. She’s clearly the most exciting young actress working today.’” I also loved Pugh’s performance as Amy March in Greta Gerwig’s “Little Women” adaptation in 2019, and I advocated for her to win the Best Supporting Actress Oscar in 2020. This movie is worth seeing solely for Pugh alone. Styles’ charm and swagger was very much needed to fall in love with his character. I found that he  played a believable husband who is both extremely loving and who also has many secrets hidden from his wife.

The stand out performances from the supporting ensemble are without a doubt from Pine and Wilde. Pine plays the role of a sneaky and narcissistic CEO-type-of-character very well, and he just makes your skin crawl, as you know he is up to no good. As stated earlier, Wilde plays Alice’s best friend, Bunny, who absolutely loves her life in Victory and could see no reason to mess up the lives they have there. The more you learn about Wilde’s character, the more you feel for her and the decisions she makes, but that is all I can say about that.

In conclusion, “Don’t Worry Darling” sends you on a spiraling emotional ride, keeping you on the edge of your seat with each scene change. The ending alone is another reason to see the movie, besides Pugh’s stellar performance. “Don’t Worry Darling” released in theaters Sept. 23, so be quick to see it while you can!

Vanessa Rodriguez-Mclean is a fourth year media and culture major with a minor in journalism.