A Thank You & A Goodbye 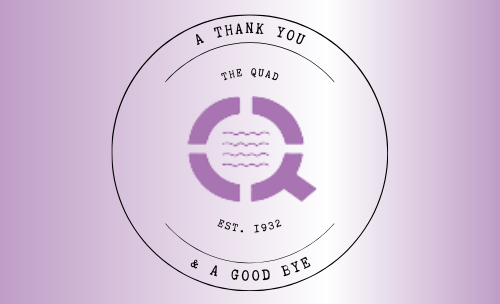 The Quad Student Newspaper, has one of the most welcoming and dedicated communities at West Chester University (WCU). I can say with total assurance, that without the individuals that make up The Quad, I would not have written as much as I did. It is because of their hard work and dedication that I was inspired to keep writing. It was because of their compassion and friendship that I devoted so much of my time to the organization. Due to everything the organization and the people within it have given me, I write this article as a heartfelt thank you. Also, since this was my last semester, I write this as a goodbye, wishing all the best for the future of The Quad.

During my time with The Quad, I have written articles during both the virtual academic year, and this in-person academic year. In both instances, I was greeted with kindness and treated with respect. I have enjoyed the privilege of writing for the features, op-ed and news sections. In writing for the features section, I maintained two columns, and had the honor of writing for four features section editors. I also maintained two columns for the op-ed section, where I had the honor of submitting articles to two op-ed section editors over the course of my time with the newspaper. For the news section, I wrote a handful of articles for three news section editors, which was also an honor. I say this, because in the short time I have been with the newspaper, I have been exposed to, and worked for and with, many outstanding student leaders.

During my time, I was lucky enough to accomplish a great deal with the help of The Quad. I was able to hold four unique columns, facilitate the creation of the new business sub-section, distribute the newspaper weekly while reevaluating and expanding the locations reached, and I was able to contribute to The Quad with a great deal of articles. All of those accomplishments were made possible through the environment created and fostered by the organization’s capable leadership, and the enchanting individuals I have the pleasure to call my friends.

I have witnessed the evolution, adaptation and advancement the organization has made over the past two years. The Quad has evolved into an ever-more involved and passionate group of students. The organization, like all of WCU, had witnessed an entire year of online education, and adapted to the means by which they both reported and disseminated important information. Lastly, The Quad has continued to grow, not just in membership, but in size and scope of what it encompasses and does, day in and day out.

The newspaper has expanded its reach across campus this year as well, now delivering to locations like the new SECC building, the FHG library and the Sturzebecker Health Science Center. In total, you can now find The Quad in over 30 locations across 26 buildings. The membership of the organization continues to strive for greatness and diversity within each issue printed and posted on The Quad’s website.

It is because of the constant striving to do better, the community formed, and the level of diversity of thought presented, that I am proud to say I worked with The Quad. Over the course of this year in particular, the newspaper has had some diverse viewpoints published — viewpoints that not everyone may agree with. What makes the newspaper so great is that it has operated as a place for open discussion, and a way for all opinions to be shared equally. It has become increasingly rare to find such a forum, of open thought and equality of voices presented. I am again, proud of The Quad for their dedication to ensuring all sides of a given argument are open for presentation, while keeping professionalism and fact-based discussion at the forefront. It is because of all that I have elaborated within this final article, that I am so pleased to say I have been a part of The Quad, and yet so saddened to leave. As my final — and 136th — article for The Quad, I thank everyone within the organization for their relentless professionalism and compassion.