State Dollars Per Student Continue to Be Historically Low 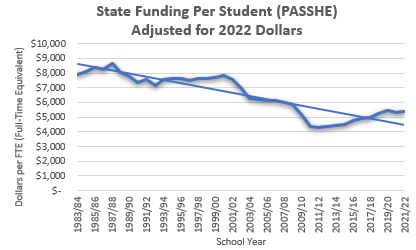 Last month, I received information regarding the funding and enrollment numbers of the Pennsylvania State System of Higher Education (PASSHE). Finally, I took the time to put things together to better illustrate what I already knew, that PASSHE is underfunded, and we need to do something about it!

Prior to receiving this information, I was able to guesstimate from a graph about the funding levels from 1983 to the mid-2010’s and had written a piece a while back showcasing some of the reality with recent PASSHE funding. However, with this information I have the general fund appropriation information and enrollment numbers from 1983–84 to 2021–22. As it stands the Chancellor of PASSHE, Dr. Daniel Greenstein is requesting $550 million in general fund appropriations which is historically low. As from 1983–84 – 2008–09 the state provided PASSHE with general fund appropriations that were never below $640 million adjusted for today’s inflation. In fact, only nine of those 26 years PASSHE had less than $700 million adjusted for today’s inflation. Meaning that 2/3rds of those years had over $700 million adjusted for today’s inflation.

Many times, those will point at the enrollment numbers decreasing in the past decade, which while true doesn’t actually showcase that even adjusted enrollment funding for PASSHE is low. Just for reference, back in the 1986–87 school year there were about 86,000 students, currently PASSHE has around 88,500. But the funding level couldn’t be more different. As of this year, the general fund appropriation is $477,470,000. However back then it was $710,190,000 adjusted for today’s inflation. It should be the question why back a few decades ago when we had 2,000+ less students we had over $200,000,000 more funding?

There is an upcoming Board of Governors meeting April 13 & 14 which the public, meaning you and me, can attend and attempt to get our voices heard. I encourage you to attend and remind the Board of Governors and various University Leaders that we need to be demanding more than $550 million from a state legislature that used to get upwards of $750 million in general fund appropriations. You can find information on how to attend at www.passhe.edu.

Additionally, there are primary elections coming up where your vote is your voice! Make sure you are putting that vote to those who are fighting for PASSHE. If you want to learn more about the fighting for a Fully Funded State System of Free Public Higher Education check out @defenderspasshe on twitter, passhedefenders on Instagram, or join our email list by emailing PassheDefenders@gmail.com as we bring people across the commonwealth to fight for PASSHE.