Out Of Focus: How We Have Shifted Our Political Sight 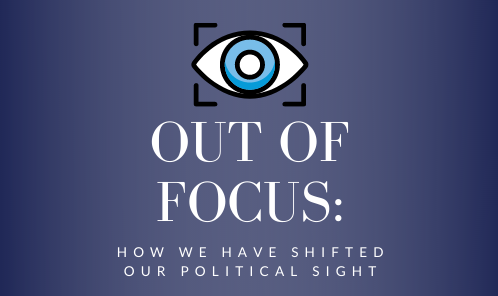 More and more, it seems the political arena in the United States has become plagued with partisanship and an unwillingness to compromise. The ‘us vs them’ mentality is a dangerous path to tread down, especially when most Americans agree on the most basic and fundamental issues that face our nation. The shift in our political sight has been the move from compromise to blaming. From reaching across party lines to craft and pass a bill, to striking down the opposition’s legislative goals even if they align with your own. The questions are, how did we get here and how can we fix our political lens on cooperation, as opposed to resorting to competition.

To start off, according to an article published by the Harvard Business Review and written by Katherine M. Gehl and Michael E. Porter, a “healthy competition in an industry is a win-win. Rivals compete fiercely to better serve customer needs. Channels for reaching customers reinforce healthy competition by educating customers and pressuring rivals to produce better products and services.” What we are seeing in U.S. politics is not a healthy dose of competition, rather we see a race to the bottom as either side tears the other down. Due to this lack of positive competition in politics, the customer, or in this case the constituents of each political representative, suffer.

The previous mentioned article only supports this point, by stating how the U.S. lacks the “…sort of healthy competition in the politics industry…” previously described. Within politics, “competition takes place on two key levels: competition to win elections and competition to pass (or block) legislation.” Our elections have become oversaturated in the “…unhealthy win-lose competition: The duopoly wins and the public interest loses.” In other words, the foundation in which our political world operates, has changed structure to make unhealthy competition a reality.

To go about fixing the unhealthy form of competition we are seeing, rivals in the political arena need to stop “…dividing up voters according to ideological and partisan interests.” Demonizing the other side does not bring about a political harmony after the dust of an election settles. By focusing more on the candidates running, and less about the party their name is associated with, we can see our politicians as human and maybe even neighbors again.

According to an article published by the Pew Research Center, “far more Americans have a favorable opinion of their local government (67%) than of the federal government (35%).” This phenomenon is because our local officials are quite literally our neighbors. We can see this in another statistic, showing that “…there is substantial satisfaction with the quality of candidates running for Congress and local elections in recent elections.” In contrast, “…recent presidential candidates… in recent elections” have been viewed to be of lower quality.

In West Chester, when we think of the community members that are on the borough council, or run for mayor, we view them just as that; community members. While federal candidates or political figures seem to be more out of touch, it is important to remind ourselves we are more connected to them than we think. First Lady Jill Biden obtained part of her master’s degrees in both education and English from West Chester University. When I connect her to that, I am not thinking of a party, but rather who she is as an individual.

To shift our political sight back to a place of humanity, we have to start realizing each political figure is just another person. When we are bombarded in elections with advertisements about either candidate or side, we should remind ourselves of that fact, do the research as to what any given candidate really stands for, and vote not for a party, but for the individuals we deem best suited for the job at hand.