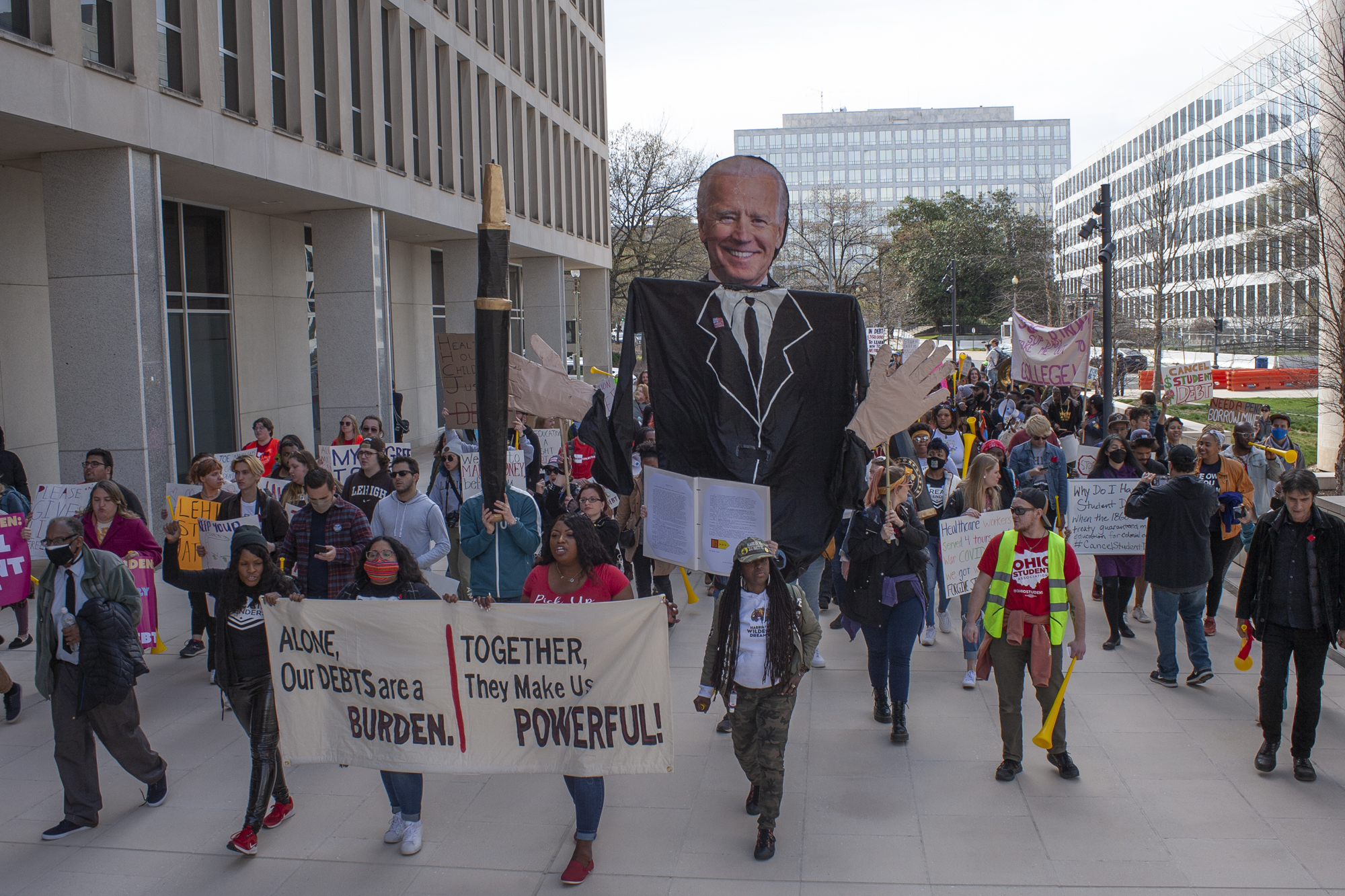 On April 4, Debtors and allies from across the country came to DC for an action held by the Debt Collective, which is the first debtor’s union. I led a bus of folks from Philly which included someone with over $200,000 in student debt someone with $120,000 in student debt sharing how a Navient rep said, “people with as much debt as you don’t deserve to have a life,” another who was there for friends they knew struggling with their student debt and many more, These debtors and allies all had one thing in common: They wanted Biden to remember he owed them! He owed them full student debt cancellation and free public higher education. No one deserves to be dealt a Debt Sentence for an Education or the shame and blame associated with debt.

When we got there the action itself featured speakers from the Debt Collective and organizations such as the Dream Defenders, Harriet’s Wildest Dreams and other of the 50 plus cosponsors. There were speakers like Nina Turner, who stated that, “the walls of injustice must come down, the walls of predatory capitalism must come down… it’s going to come down because of people like us gathered here from all walks of life from all identities demanding that the walls of injustice come down… canceling student debt is justice don’t let anybody tell you that it is not.”

Additionally, Philadelphia’s own city council member Dr. Kendra Brooks of the Working Families Party took the stage sharing her own story being a single, teenage mom who accumulated $80,000 in student debt by the time she graduated. And her overcoming with four kids by the time she graduated. She noted how she had, “$600 every week garnished of her wages before she even had her paycheck with a family to feed.” Additionally, how “Black women are the most educated group of women in this country but also are the most in debt.” And that this debt puts shame on people, “until we take the stigma off of debt, until we take the stigma off of education being a right, until we take the stigma off a system that criminalizes folks that have debt we will continue to be in this situation. That’s why it’s important that we tell our stories. And it’s not a story of shame, it’s a story of overcoming.” She also mentioned how she, “not a Democrat, not a Republican, my party is the Working Families Party.” She mentioned how the Philadelphia City Council has, “unanimously signed a resolution urging Joe Biden to Cancel Them Jawns Now!” And concluded saying, “There is no shame in your student debt. I need you to say it loud and proud. I need you to organize, organize other folks to tell their stories… and together that’s how we win!”

The action included such signs and banners with the following, “In debt $350,000 to learn how to save your life,” “Joe Byron, Sup Baby, Take Me Out To College,” “My life is worth more than $38,444.00 of student loan debt!!! Pick Up The Pen Joe,” “Cancel That Jawn”, “Hey Joe, Quit Biden’ Your Time,” “Education Shouldn’t Be a Debt Sentence,” “Alone Our Debts are a BURDEN. Together They Make Us POWERFUL,” “Student Debt is Racist Sexist Unjust!” “You Owe Us! Cancel The Debt!” and so many more.

Other than signs, there were vuvuzelas, cans on strings (to illustrate Biden kicking the can down the road), a large cardboard Biden and pen and flash paper (for a Debt burn). As well, many throughout the action were wearing a square red piece of fabric which is a symbol of the Debtor’s movement. As the one organizer and Co-Founder of the Debt Collective, Thomas Gokey said of how “it is a symbol to show we are all squarely in the red.” All of which added to the atmosphere as we circled the Department of Education building a number of times. Followed by a debt burn and the sounding of our vuvuzelas! As we sounded off to make sure President Biden and Secretary Cardona are aware that debtors have power.This power, pressure and movement building around student debt cancellation and free higher education is working. Just two days after the action the Biden Administration put out a statement announcing another extension to the pause of student loan debt. But as those within the movement are aware there needs to be full student debt cancellation. This isn’t something that Biden will do out of the kindness of his heart.

As the abolitionist Fredrick Douglas famously said, “Power concedes nothing without a demand”. We need to keep the demand front in center as the Biden administration continues to kick the can down the road! And debtors like myself with currently less than $20,000 don’t want to see only partial debt cancellation, but full student debt cancellation and free public higher education. Because anything less than full cancellation and free public higher education isn’t true justice!

Join in the calls for Biden to use his executive authority to CANCEL STUDENT DEBT!

And remember you are not a loan. You are not the loan you took out to attend college and you are not alone as there are over 44 million in the United States with student debt. This doesn’t just include the 22-year-old out of college, but the senior citizen who is getting their social security checks garnished, or the single mother attempting to get an education while also caring for their kids. This debt isn’t an individual failing but a failing on society.