Student Written One Acts This Weekend 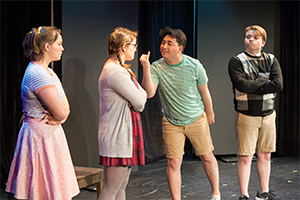 The students in the playwriting class this semester at WCU have written one act plays all around 12 minutes set to be acted out this weekend. The student-written one acts are set to take place Friday and Saturday at 7:30 p.m. and Sunday at 3 p.m.

These student playwrights made it clear that because this was a class, they needed to include a certain element to their show. The class required them to use a character that is considered a stranger, based on what they had learned prior in the class. This only reminded them that this is still a class and they will get graded for it.

“We were being graded on these, so it’s hard not to feel the pressure,” Ronnie Hernandez said, who wrote about their life in their one act called “Disordered Self Love.” Hernandez also added that even though there is pressure, the professor is “an awesome instructor” and “created a safe space where I could present a piece that was so vulnerable”.

What gets even more students involved in these shows is the many roles they may take on. Student playwrights do not usually direct their own shows and can sometimes direct other people’s one acts.

In anticipation for the show, Logan Santana, who wrote “Are you having fun?” decided to take on the role of stage manager for her show. She spoke about what she is excited about for the show being on display starting April 1.

“I’m excited to see it come to life,” she said. “Seeing the final product of all the shows that people work so hard to do is going to be very interesting because we had such a limited amount of time.”

Luke Mundorf, who wrote “Forever December,” explained how his show is being directed by his long-life elementary school friend and is excited to see how it turns out.

After talking with these student playwrights, it is clear that most of the one acts written this semester are not playful, but serious.

Santana addressed what to expect from the shows. She articulated that there are many serious and hard topics covered within each show, and that there may still be something funny or a life lesson the audience can take away from them. In terms of her show specifically, she stated that the audience can figure out relationships and how to connect with people.

Murndof explained how his show talks about “a lot of relevant things today.” He also mentions that he took some personal inspiration for the storyline and mentions that there are some signs or indications of PTSD or emotional triggers.

Hernandez is looking to show the world their story. Based on the show’s intense topics and personal stories, this show’s expectation stays in line with the serious theme. He stated, “It encompasses what my experience as a non-binary, AFAB, overweight person with an eating disorder looked like.”

To purchase tickets and learn about future shows, head online to https://www.wcupa.edu/arts-humanities/theatreDance/.