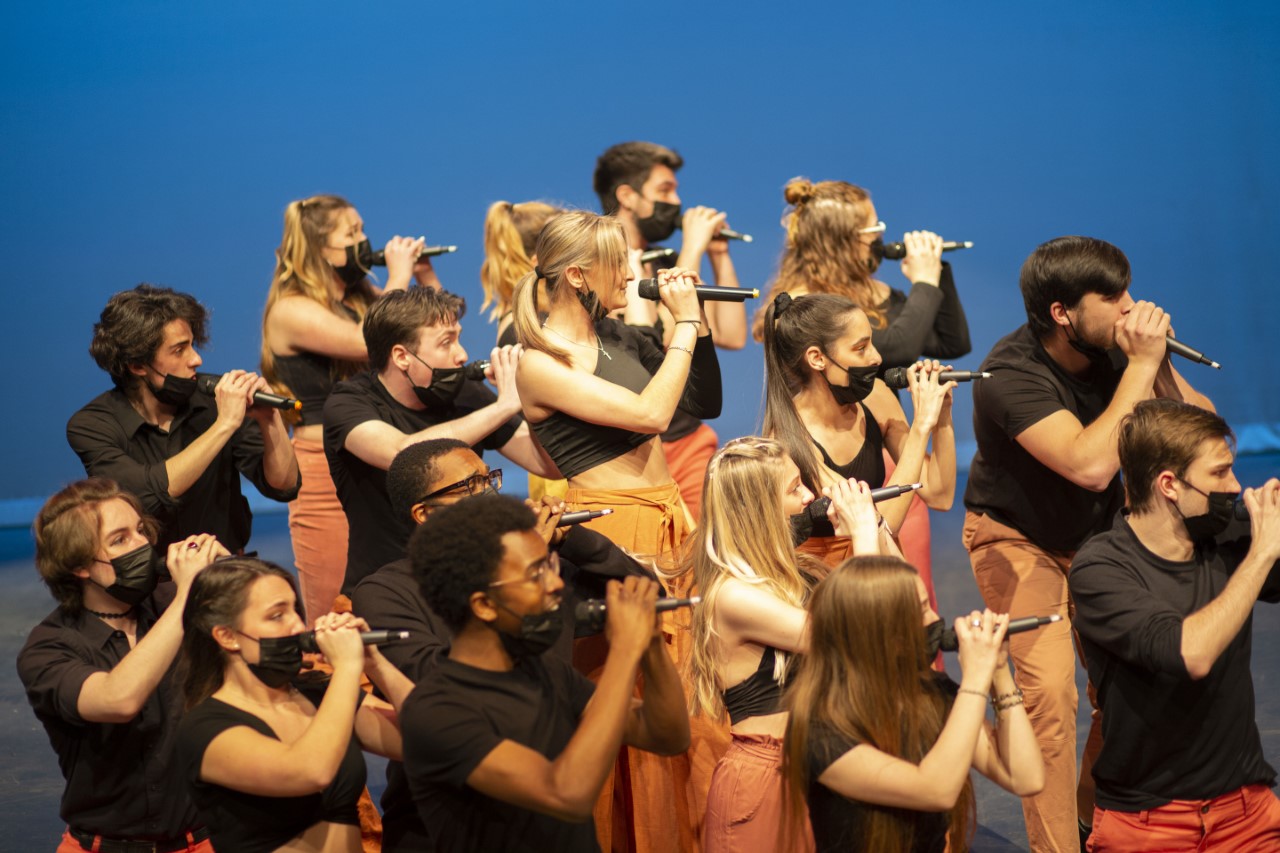 Under A Rest performing at the ICCA Preview. Photo by Hally Everett.

On Wednesday, Feb. 16, two a cappella groups—Under A Rest (UAR) and High Street Harmonix (HSX)—performed a preview of their performances for the International Championship of Collegiate A Cappella (ICCA) competition. Both groups performed multiple songs, which included choreography as well as singing. This preview is a free event that occurs every year, giving the groups a chance to practice their sets in front of an audience before they take the stage. I interviewed Jackie Ranieri, Vice President of Under A Rest, and Jessie Hazell, President of High Street Harmonix, to hear about their perspective on the ICCA.

The ICCA is run by Varsity Vocals, an organization that provides a cappella opportunities to college students, and it occurs from January to April. There are multiple levels including quarter-finals, semi-finals and finals, with more than 400 groups who compete. Under A Rest competed against six other groups, and High Street Harmonix will compete against seven other groups. On Saturday, Feb. 19, Under A Rest competed and on Feb. 26, at 7 p.m., High Street Harmonix will perform. Best of luck to both of these groups!

Hazell is a fourth-year Early Grades Preparation major with minors in Theater and Civic & Professional Leadership. When asked what her hopes were for High Street Harmonix at the competition, she said, “High Street Harmonix hopes to go out on that stage on Saturday night and show how much dedication and passion we have for our group and music… If the audience has as much fun watching us perform as we are having performing, then we have succeeded.”

She also explained that she likes being in HSX because they are always able to make her laugh.

Ranieri, Vice President of Under A Rest and a Music Education and Music Therapy double-major, had similar answers. She has been a member of Under A Rest since 2017 and is “obsessed with the art of a cappella,” and has met people who will be her friends for life.

When asked about why she likes being in the group, she explained, “I like being in UAR because we are professional, but also a family.” Under A Rest was formed in 2014 and they have been competing in this competition since 2016. In addition to winning multiple awards, including ICCA Mid-Atlantic Quarterfinal Champions, they have four albums out on all major streaming platforms: “Jailbreak” (2017), “Flicker” (2019), “Highs & Lows” (2020) and “All For Love” (2021). Check them out!

There’s still time to purchase your tickets to see High Street Harmonix compete on Feb. 26.  General admission tickets are $25 and can be purchased at the Varsity Vocals website. Can’t make the competition? Both groups have videos on their YouTube channels including previous performances, documentaries, and more! If you are interested in learning more, follow them on Instagram @wcu_underarest and @hsharmonix. Good luck to both groups; we look forward to seeing you perform!

Hally Everett is a fourth-year Media & Culture major with minors in Health Sciences and Entrepreneurship. HE885418@wcupa.edu