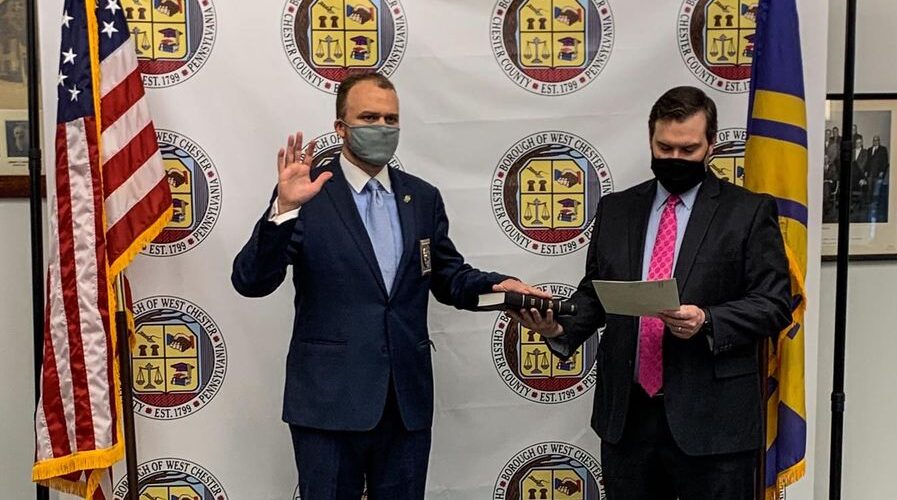 Interim Mayor Jordan Norley being sworn into office on Feb. 18

On Feb. 18, West Chester Borough Mayor Dianne Herrin formally and officially left the mayoral office. Elected as the Pennsylvania State Representative for the 156th District in Nov. 2020, Herrin served both offices from when she was sworn in on Jan. 5 until this past Thursday. The Feb. 18 departure date was chosen by Herrin in an effort to support West Chester’s new police chief and to allow for the mayoral position to be filled by appointment rather than election.

According to the borough’s code, an Interim Mayor had to be elected or appointed to serve out Herrin’s term through the end of 2021. The process was dependent on Herrin’s departure date — if she had vacated the Office of Mayor before Feb. 17, a special election for Interim Mayor would have been held in May. By vacating on Feb. 18, the Borough Council was, instead, required to appoint the Interim Mayor.

Herrin publicly explained that her departure date was done purposefully, as a means of giving the residents of West Chester Borough more influence over the mayoral transition process. She reasoned that the May special election was not the more democratic of the two processes, despite appearing as such — in a special election, the voters don’t decide the candidates, the political parties do. Breaking it down: the 15 members of West Chester Borough’s Democratic committee would have chosen one Democratic candidate to be on the ballot, and the three members of West Chester Borough’s Republican committee would have chosen one Republican candidate. Herrin explained that, given the borough’s voting history, the Democratic candidate would have been the likely winner. Instead, through the process of appointing an Interim Mayor, any resident of the Borough was eligible to apply for the position, regardless of political affiliation. Residents also had the opportunity to participate in the selection and interview processes via communication with their Borough Council representatives.

Emma Bickerstaffe is a fourth-year English major with a minor in Journalism. EB891492 @wcupa.edu

Photo taken from West Chester Borough Police Department Facebook Page   The borough of West Chester entered this year with a $600,000 deficit, according to a series of...