When walking up the brick paths of downtown West Chester, one might notice the plethora of restaurants, high-end shops and coffee shops that take up most of the space in the area. This makes sense as it is what most people will be looking for when visiting.

However, if you consider yourself a local of the town, you might notice a small building on South High Street called Birthright Pregnancy Care Center. Advertising their prenatal care expertise and inviting expectant people to come in for the assistance they need, the place does not look inherently threatening.

In fact, it looks like it could be a great resource to have so close to a college campus. It appears to be the sort of place to provide people who find themselves unexpectedly pregnant with the education, information and choices that they have when tackling new or potentially scary life changes.

“At Birthright, we understand the challenges related to unplanned pregnancies. Birthright is available to women for as long as they need us. We offer love, friendship, and support to women who are pregnant or think they may be pregnant,” the homepage of their website reads. “Birthright is interdenominational and is not involved in any political activities, or lobbying. Birthright’s focus is on loving the mother, reminding her that there is hope and ensuring she is not alone.”

All of that being said, when exploring the history of Birthright, it becomes clear that their motives, goals and choices diverge quite a bit from that of being a neutral resource which provides people with all of their options and unconditionally supports their clients’ decisions

Public records found on WCU Digital Collections of past university publications show that between the years of 1971 and 1976, Birthright ran regular advertisements in the student newspaper which promoted their services through language that explicitly mirrored the pro-life agenda. 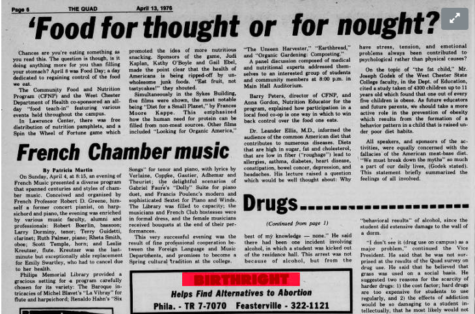 After 1976, Birthright continued to publish ads in The Quad, this time altering their language to be a bit more discreet, offering the experience of people who care and can “take the crisis out of your pregnancy.”

As the decades turned and the end of the century neared, the ads relied more on the narrative of someone who had become pregnant accidentally and was now experiencing a great deal of fear. 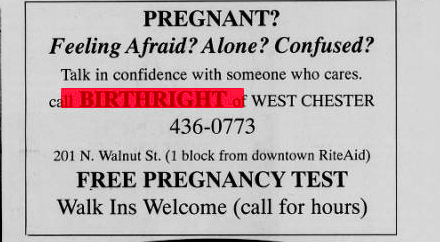 (Caption: A Birthright ad from the February 2, 1999 edition of The Quad)

While the verbiage has changed quite drastically over time, making the intentions and objectives of the Center less clear, the ads continued to run right through the 21st century, the most recent being published on Dec. 7, 2009, which simply stated, “Pregnant or know someone who is? Call Birthright,” before detailing their contact information.

That being said, the role and objective of the center has not changed at all, according to those who work there.

“The primary role of our center is to help women of any age with an unplanned pregnancy. There are a lot of women who find themselves pregnant and they are scared and nervous and unsure about what that means for them,” explained Helen Lyons, director of Birthright West Chester. “So what we do here is help them with all of the options. We are a pro-life agency, so we have all of those options as far as adoption and handling a crisis pregnancy when you’re not prepared for it.”

Lyons then went on to explain how being pro-life isn’t necessarily an issue for their patients, as the folks that come to them are already completely aware and understanding of the center’s intentions based on their online presence, despite not sharing any their pro-life agency on their website.

Crisis pregnancy centers (CPCs), such as Birthright West Chester, and the transparency that comes with their advertising are not specific to West Chester. In 2018, a research team at the University of Georgia College of Public Health dedicated an entire project to locating and composing a directory which named every single CPC across the United States.

In their research, they found that there were well over 2,500 CPCs in the U.S., 66% of which provide limited medical aid, in most cases only giving access to initial ultrasounds which confirm the pregnancy, a known tactic which lessens the chances of a mother in crisis choosing to abort.

In an article published on the UGA website which detailed their findings, Dr. Andrea Swartzendruber, the project leader, stated, “There isn’t a ton of awareness about what CPCs are and what they do, and these centers have been widely criticized for not being transparent about their mission.”

While the Birthright Center of West Chester does pride themselves in their ability to provide expectant and new mothers with many resources once they make the decision to keep their baby, there is much to be said about a pro-life organization being located so close to a college campus, where students ranging from the ages of 18 to their early 20s are experiencing life on their own for the first time in their young lives.

“I’m sure this is by design,” explained Brendan Lordan, the current Editor-in-Chief of The Quad who had taken a look at the Birthright ads and other published information that had previously run in the paper. “They sponsored a few events at the university throughout the ‘70s and ‘80s like an ‘Information Film and Discussion,’ and they were even at a panel debating abortion in the mid ‘70s [according to past issues of The Quad].”

Without aligning themselves with a political or denominational identity in so many words, the Birthright Center of West Chester made very clear in past decades that their interests and investments lie only in the assistance of pro-life decisions, something they have made considerably less explicit in recent years. Though this specific center is quick to own their pro-life stance when approached, the data and ongoing narrative of Crisis Pregnancy Centers across the country prove that the transparency of these establishments in their current ads and online personas is not always up to par.

Ali Kochik is a third-year English Writing major with minors in Journalism and Women’s and Gender Studies. AK908461@WCUPA.EDU