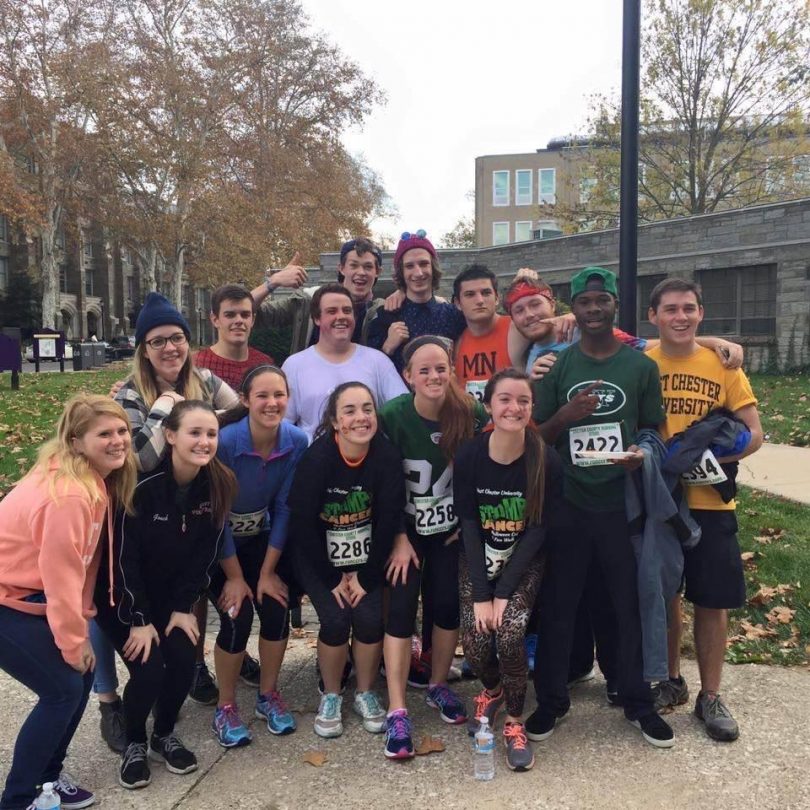 Bringing Hope Home (BHH), a club on West Chester’s campus, is a chapter that’s part of a bigger organization throughout other universities. Bringing Hope Home was started by a WCU alumni, Paul Isenburg. His wife was diagnosed with cancer and since, he and his friends began to raise money for other families they knew that were dealing with cancer. They help people specifically who struggle financially because of treatment costs. This incredible organization has helped thousands of families throughout the Chester County area, as well as where the other college chapters are located. The main mission of the group is to spread unexpected amazingness.

You may have seen Bringing Hope Home’s orange table around campus fundraising or encouraging people to sign up for events. On Sunday, Nov. 3, it was hard to miss BHH on campus. If you saw a herd of people walking or running throughout campus with the ‘STOMP’ shirts on then, that was them. BHH held their sixth annual STOMP cancer 5k to raise money to help the families they support. It was a Halloween themed fun run/ walk. The 5k is called the ‘STOMP’ because Bringing Hope Home’s goal is to stomp out cancer. Everyone who participated was motivated to share why they stomp, whether it was for family or simply for those who cannot stomp cancer for themselves. Most of the walkers, including me, dressed up and walked throughout campus. About 202 people signed up and participated in the 5k, and it was a fantastic turnout.

The event was held out front of Hollinger field house and had activities and food for everyone. For children, there was pumpkin painting and games, and for others there were a load of awesome raffles to win. Some of the raffles included Good Uncle gift cards, Couch Tomato gift cards, a Margaretville bike, framed pictures signed by the Eagles, Stomp/WCU decorations and so much more. Before the race, a family member that is helped by BHH spoke and explained how much they have helped and supported him throughout his journey with cancer. Thankfully, he is better now and able to share in the greatness of the BHH community.

Starting on Church Street out front of Anderson Hall, the 5k path went all throughout campus. We walked up and around Main Hall, through Asplundh Concert Hall, around the Quad, down past Goshen and the Rec center, through the academic quad, and back down Church St. to the finish line. The best time out of the runners was 16 minutes and 14 seconds, which was much faster than me and the rest of the crowd who walked.

After the race, they announced the costume winners which included couple, group, single and children’s costumes. The winners for the couple costume dressed as Dora and Boots and the group costume was a family dressed as a Lego family. The single costume winner was a woman in a pirate costume and the children’s winner was Rapunzel. Next, the raffle winners were chosen and I ended up winning a Bringing Hope Home themed bag. This BHH bag included so many great items like t-shirts, a sweatshirt, a glass, a hat, blanket and more with the BHH and STOMP logo. Anyone who won a raffle was going home with an amazing prize and knowing that they have done their part in helping families dealing with such difficult times.

Although this year’s STOMP has passed, it is never too late to join Bringing Hope Home WCU chapter. This club is not only rewarding, but the amazing people in this group are so supportive. The club’s current president, Alyssa Adinolfi, along with the other board members, do an outstanding job of making all of it happen. The meetings are every Tuesday at 8:30 p.m. in Sykes 255. If the meeting time doesn’t fit your schedule feel free to follow the group on any social media platform and come out to their events.

There are certainly going to be more wonderful events held by BHH and getting involved is worthwhile. Lastly, be sure to look out for the STOMP next year and come share why you want to STOMP out cancer and spread unexpected amazingness with us.

Amanda Hearn is a psychology major with a minor in American Sign Language. AH888217@wcupa.edu