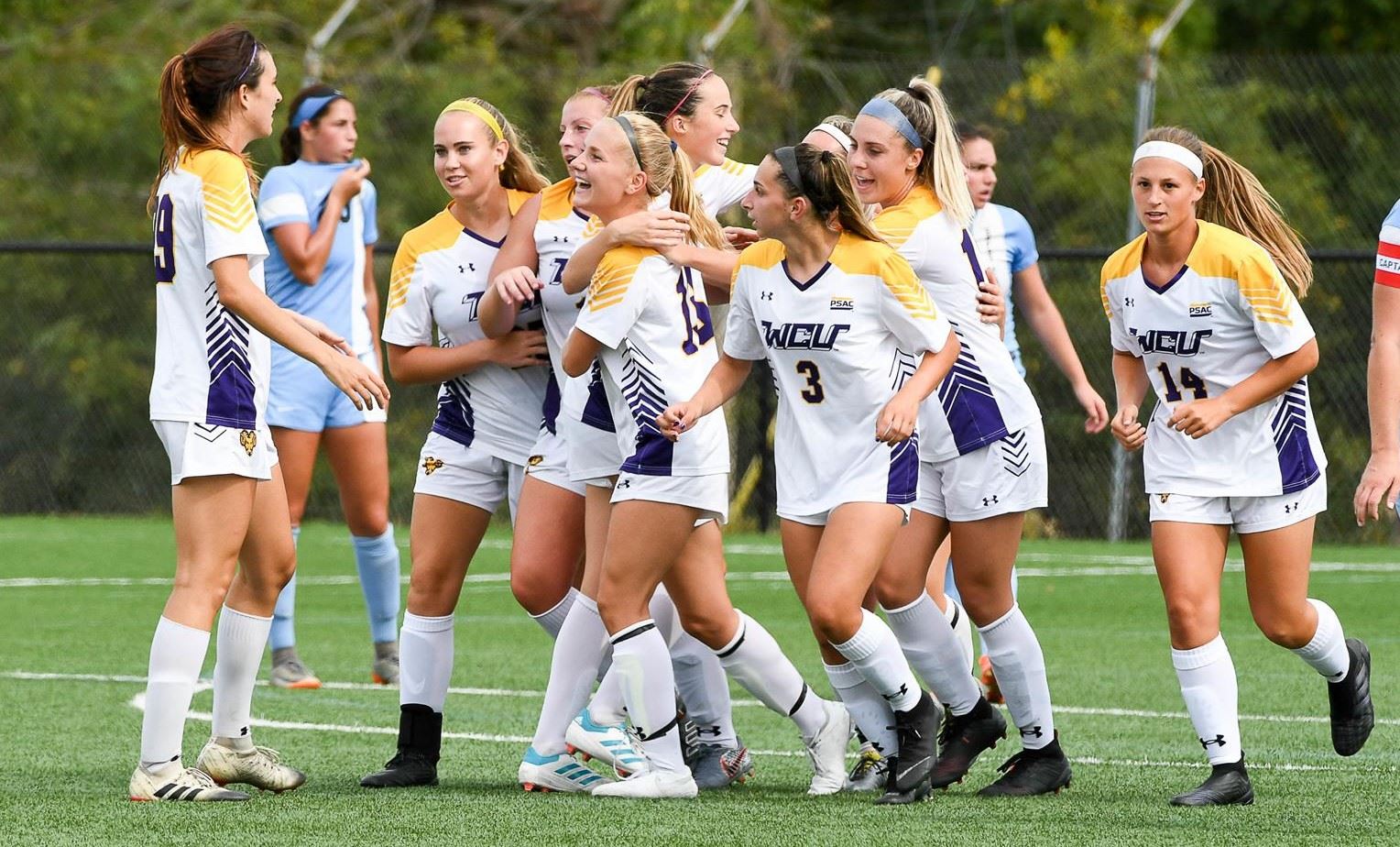 WCU’s women’s soccer team continued their impressive 2019 campaign over the past week and a half with two shutout wins over PSAC East division rivals Lock Haven and Mansfield. Their first of the two — at home against Lock Haven on Sept. 21 — was won due in no small part to a tremendous outing by senior and captain Jenny Bail (number 29).

West Chester wasted no time, forcing two corner kicks in the first minute. They would maintain their control for the rest of the match, spending the majority of the time in Lock Haven’s defensive end and allowing very little sustained offensive pressure from LHU’s squad. Bail struck first for West Chester in the sixth minute. Sophomore Dani Cady (number 14) made the corner kick into the box, where Bail headed the ball past Lock Haven goalkeeper Karly Trillhaase. Cady would also assist on Bail’s second goal of the game in the 23 minute, serving into the box from the right side where Bail finished from roughly six yards out.

“My goals would’ve been nothing if not for the passes leading up to them,” Bail said after the game. “[I had] Dani’s great crosses. I just stood there.” When asked about the chemistry between herself and Bail during the match, Cady said, “Jenny’s just a player I can trust to get it in the back of the net, and today she was there.”

Coach Betty Ann Kempf Townsley, who’s led West Chester’s women’s soccer team for 13 seasons, weighed in on Jenny’s performance, “She’s been consistently in great places to score and just can’t get the result, so for her to have two goals today was huge.”

When questioned about what makes Jenny a valuable member of the team, Kempf Townsley said, “Her leadership [and] her play, her ability to dominate the midfield. She can hold onto the ball, she can dribble with the ball, her long stride, her long legs [and] she is someone other teams really respect.”

West Chester’s third and final goal was scored by junior Hannah Zach (number 13) in the 63 minute, who made a confident and powerful strike from far outside the box — leaving Lock Haven’s goalkeeper once again unable to recover and make the save.

The match finished with a score of 3-0, allowing West Chester’s squad to remain undefeated going into Mansfield with a record of 5-0.

But the well-earned victory deserved some reflection before considering the game which followed at Mansfield. When asked about the preparation that got them the win, senior and captain Madison Baxter (number 23) joked, “I had pasta for dinner last night. I had pasta and I got [a] good sleep, and I woke up and I just pictured the game and how we were gonna come out and play.”

But Baxter also had this to say of the team’s preparation, “We practice hard when we don’t have games, we have good fitness all around on the whole team, so it’s kind of second nature to us at this point.”

Due to that hard practice, the team felt prepared for their next game the following Wednesday. But practice isn’t the whole picture, and the players were asked what successes they would take with them from the match against Lock Haven and build on for Mansfield.

“I think momentum’s huge for this team, and I think we’re building every game off of it,” said Cady. “We’re getting more creative; we’re finding new ways to score and win every day.”

WCU’s squad certainly seemed to build on the momentum from their match against Lock Haven, putting up four goals against a plainly overmatched Mansfield team. Zach and Bail each scored another goal against Mansfield, bringing them to five and four goals on the year respectively. Junior Olivia Muha (number 12) added another, for a total of three on the season, and freshman Nicolette Harrison (number 20) scored her first goal as a Golden Ram. The 4-0 victory propelled WCU to a 6-0 on the season.

But the Golden Rams weren’t meant to remain undefeated; top-ranked Millersville edged them out at MU on Saturday, 2-1.

Before Saturday’s game, both teams held a 6-0 record on the season, and the Marauders hadn’t allowed a single goal in their six games.

That changed early in the first half of Saturday’s game, when sophomore Katie Crouthamel (#4) scored her first goal of the season for the Golden Rams.

Millersville recovered and took control of the game back from West Chester in the latter part of the first half, however; MU’s Michelle Belcher scored in the fortieth minute to tie it going into halftime.

WCU seemed to bounce back to start the second half, controlling the ball far more than Millersville and seeing some quality offensive chances. Cady had two close calls in Millersville’s end, but neither got the ball to the back of the net.

One of Millersville’s few second-half offensive moments would break the tie, as the Marauders’ Savannah Rennix took a shot that was just barely missed by WCU’s senior goalkeeper Brooke Myers (#1).

“It’s disappointing without a doubt, but in the grand scheme of things I think it can be used to our advantage,” said Bail after Saturday’s game. “It didn’t end up how we wanted it, but it’s only going to motivate us to play harder.”

So are they worried about playing Millersville again later in the season?

“We’ll be playing them again on Rockwell and we’ll be prepared to take it to them,” said Baxter. “We’ll straighten out some kinks from today. I’m not worried. We needed some competition and adversity to grow so this loss will help us. It’s a long season.”

The team’s next game will be at home at Rockwell Field against Shippensburg University on Saturday, Oct. 5, at 2:30 pm.

Jai-La Aponte is a fourth-year student majoring in English and minoring in creative writing. JA918974@wcupa.edu

Julia Vignali is a fourth-year student majoring in English. JV876032@wcupa.edu