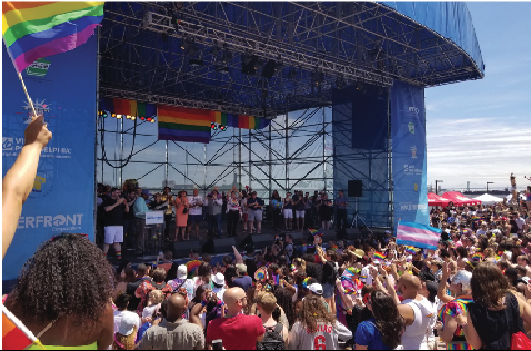 It’s June. Rainbows are everywhere: on bottles of mouthwash, on t-shirts, at the top of flagpoles, on sneakers. Exactly 50 years ago, in New York City riots broke out between police and the gay community at the Stonewall Inn. Police raids often took place at bars that openly welcomed members of the community: drag queens, transgender individuals, feminine men, butch lesbians. Activists took the initiative to ensure that members of the community could be open about their sexual orientation without the fear of being arrested.

It is because of these queer individuals and the allies alongside them who fought for the rights of all humans that gay marriage became legalized in 2015. It is important that we celebrate the freedom the community gained, but remember the uphill battle the people before fought to allow the entire community to live a safer life. New York has been planning the 2019 LGBTQ+ pride celebration since 2017 to commemorate the 50 year anniversary of the Stonewall riots-and that celebration came to Philadelphia this past weekend.

June 7, 2019 began the kickoff for the celebration in Philadelphia-less than an hour away from West Chester University’s campus. The corner of 12th and Locust became the core of the queer block party for a few hours starting at 6 p.m. and lasting until 10 p.m. Barricades blocked off traffic to allow a makeshift game of soccer to be played on the street. People clustered together while laughing and drinking booze from the local convenience store.

Pride anthems from Whitney Houston and Britney Spears bumped the speakers from the DJ booth. Bodies decked in heavy makeup and fishnets gravitated and grooved to the sound. I couldn’t help but feel nostalgic high school vibes, like I was at a gay prom. Definitely designed for the college crowd, the atmosphere allowed for socializing and hanging out on a cool summer evening until the sun set and drove the crowd to the local bars for the night. Truly a great preview to the parade experience.

Saturday, June 8, 2019 brought a lull in the celebration, but people in town for the weekend celebration could be spotted sporadically around the city in rainbow garb or at Big Gay Ice Cream on South Street, grabbing a frozen treat.

At 11 a.m. on Sunday, June 9, 2019 the main event began: Philadelphia’s pride parade began at 13th and Locust and ran to the bridge that takes Philadelphians and tourists to Penn’s Landing. The route carried all sorts of individuals celebrating gay liberation from a choir of men singing the Y.M.C.A. on a float to an industrial vehicle entirely covered with rainbow flags to a bearded drag queen lip-syncing on foot. At times, there was no telling where the parade ended and the crowd began. Attendees wore their flags as capes and decorated their bodies with stickers respective to the colors in their identifying flag.

Around 2 p.m., the celebration moved to Penn’s Landing, where tents lined all edges of the venue and a large stage was set up stadium-style to listen to Pennsylvania’s governor speak on behalf of his work to make all voices heard and ensure all rights are protected despite military bans or abortion restriction.

Drag queens took to the stage to lip sync as they do on the popular show, “RuPaul’s Drag Race,” and local artists performed popular pride anthems. A hilarious comedian by the name of Fortune Feimster make light of her coming out experience being ignited by a Lifetime movie. She says, “I never knew I was gay until a character on Lifetime liked girls. I wouldn’t be here today without Lifetime. Is that a little sad?” Performances kept up even after I grew tired of existing in the heat and realized that my own layer of glitter did not dual function as sunscreen.

The purpose behind each tent setup could be for a political movement to promote inclusion, provide information on LGBTQ+ counseling, free HIV and AIDS testing or even food coupons at local businesses-proving that the festival is truly for everyone. All ages could be seen at the festival, from freckled children to people with graying hair.

One of the more memorable tents I came across was led by advocates of the human rights campaign. You might recognize their logo as a navy block with a bright yellow equality sign in the center. Their main mission is to ensure the rights of LGBTQ+ members. Part of what they do is fund political leaders that support gay civil rights legislation as well as financially supporting members of the community directly to provide housing for youth that are not accepted or welcomed by their family.

Ann Mintz is a woman I met at a stand advocating to keep abortion legalized. Mintz spoke to me about her political stance: “I was at the Stonewall riots. I told you, I’m old,” she laughs. “I found a lot of the people I knew were part of the community and I wanted to advocate. I always say to young people that voting is so important. Twenty years ago, a governor would not want to be photographed at an event surrounded by rainbows. Look at where we are right now.”

The disconnect between my generation and Mintz’s becomes more evident when simple facts like that one are pointed out. Of course I knew that 20 years ago, a governor would not want to be photographed here, but I have never lived through that drastic change. I am privileged to not have had the thought cross my mind. It is events like pride celebrations that bring people from all generations, cultures and beliefs together and educate one another.

Like many experiences in life, pride is truly what you make of it. Keeping an open mind allowed me to laugh and learn at the same time. I took the subway to Philadelphia’s pride celebration on my own. I sought out speaking with people I did not know. I made new friends. If I could truly sum it up in one word, it would be beautiful. That might be cliché, but that’s how I felt. It was freeing to see the community so happy in their skin, so in-their-element in the city of brotherly love.