The state of the discourse 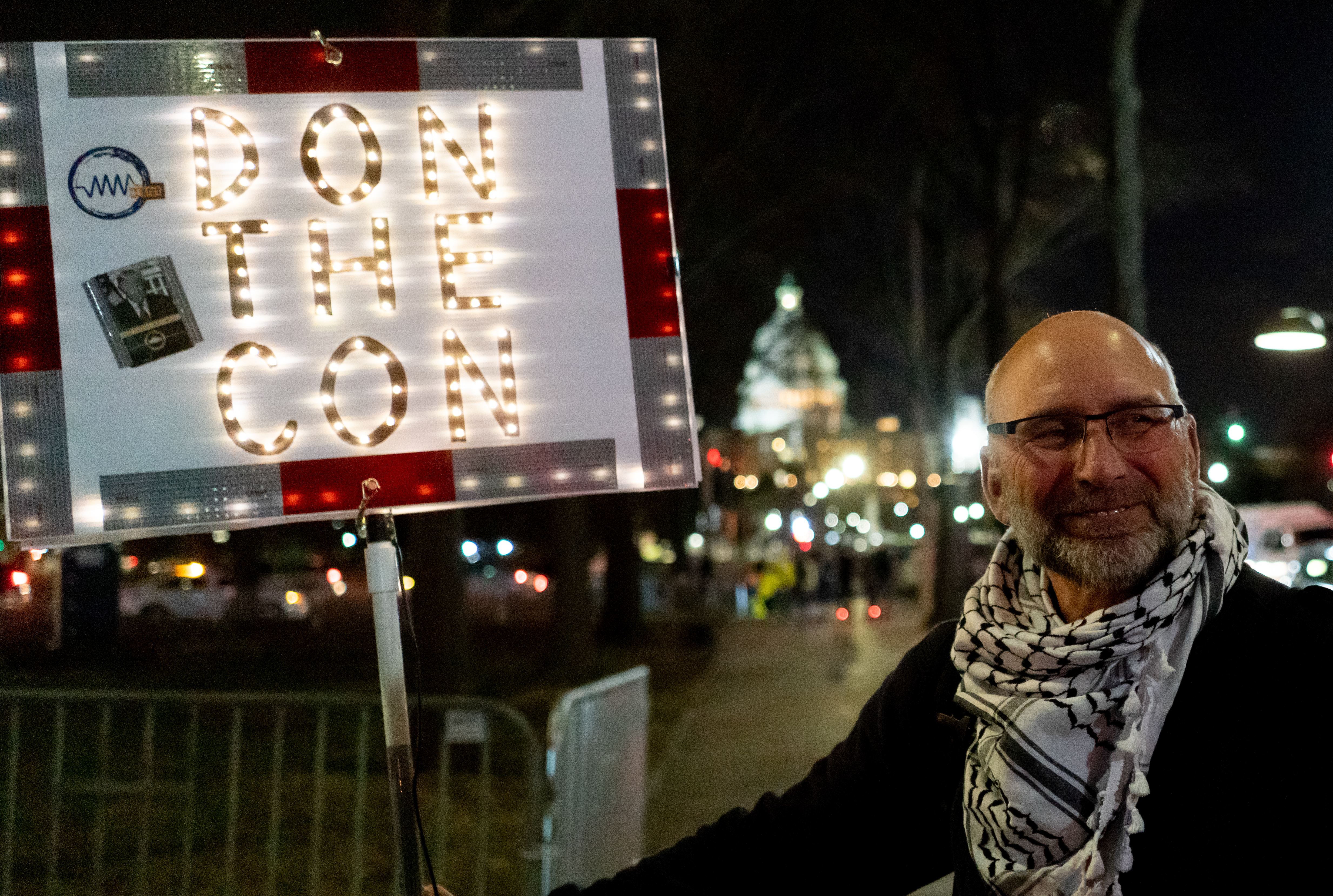 Image: “State of the Union protest” by Victoria Pickering is licensed under CC BY-NC-ND 2.0.

This year’s State of the Union, like those before it, demonstrated why we see the world so differently: the left and the right popping up like prairie dogs to clap for the narrative they decided to join in with. The cordiality of the interactions between each member was discomforting when juxtaposed against the vitriol used to describe one another. I don’t mean to condemn the institution or the event, I want our representatives to be slightly jingoistic, strongly willed, and very civil. What I don’t want is for them to be blind subscribers to ideology. Unfortunately, that is what succeeds in the artificial dichotomy of our two party system. Coming away from this duality, I want to elaborate on how difficult it is to be a viewer of such an event.

As a viewer watching the clash of narratives in the chambers of congress that night, I was reminded of Dr. Seuss’s “The Zax,” where two people refuse to budge from their paths and walk around each other – an allegory of the importance of compromise. Right now, we are the two Zax, two sides unwilling to budge, looking left nor right neither while two polis suffers around them. George Carlin, the famously cynical comedian, pointed out that this stubborn duality is a symptom of a greater problem when he said he doesn’t blame politicians for being stupid. Carlin blames the people who elected them and the society that raised them up. He has a point: we do pick those in charge. The problem is how our choice is being manipulated with calculated narratives as well as how we are being tricked into thought-camps.

The age of information turned into the age of misinformation. It is used to both hurt and herd us all by distracting us with false dichotomies on issues that matter to us. Abortion is not just a debate between life of the fetus or death of the fetus, it involves the ethics of bodily consent and autonomy of the mother. Gun control involves the right to freedom, defense, the right to live, the aggression and danger of being a police officer and a host of other issues. These are not simple issues, and not nearly as simple as we want to think (or what they want us to think.)The simple problem is that it is easier for people in power to control those not in power if they are uninformed and distracted, and that’s what we are – and what we must stop being. We are students at a college, an institute of higher learning, and have yet to be shackled into the societally imposed cages of capitalism.

‘The simple problem is that it is easier for people in power to control those not in power if they are uninformed and distracted, and that’s what we are – and what we must stop being.’

In his book, the “One Dimensional Man,” Herbert Marcuse warns of the “false needs” that capitalism (our specific form being identified as neoliberalism) entails. This can be explained with the blue and green text on an iPhone. Some people buy iPhones in part they feel a need to be a member of the blue text group. This is a false need. Apple has sold us a solution to a problem they made by distinguishing people as in group and out group – they have made a false need. Many of the issues we face have been made to look like this commercially artificial grouping. One example is the hyperbolic fear of gun control, where most Americans support some level of control, any democratic initiative is responded to with a claim that they are trying to take away all guns. This is a solution to a problem that the republicans manufactured and creates a narrative that traps people on one side. This fear mongering makes the opposing side seem villainous instead of honest actors who aren’t restrained to a singular ideology. This narrative manufacturing combined with a multiplicity of other issues which work similarly to create the entrenched society we have today.

What I got from the State of the Union was deeply informed by my educational background as a philosophy major. Our country is trapped in many ideological bubbles, so exhausted from right and left talking points that the idea of discussing any politics is aggravating. We can’t fall into the trap of silence and passivity to a discourse that defines our society. We need to re-assert our crucial distinction from the rest of the animal kingdom —  our rational thinking intellect that spawns our political discourse.

We don’t have to agree on everything, or even most things, but we must think and engage in these topics and work to understand each other. We are in the twilight of our educational lives, where we maintain some shelter from the harsh realities of the real world. This is the time where we need to build these skills and carve out our identities so that we may properly engage the political sphere. We need to think, reflect and, most importantly, be informed on the issues. When we view the State of the Union, or any political event, we must do so as Americans, recognizing that we make up the fabric of the flag behind the man speaking and that we define what that fabric means moving forward.

Charles Baker is a third-year student majoring in Philosophy. CB920546@wcupa.edu