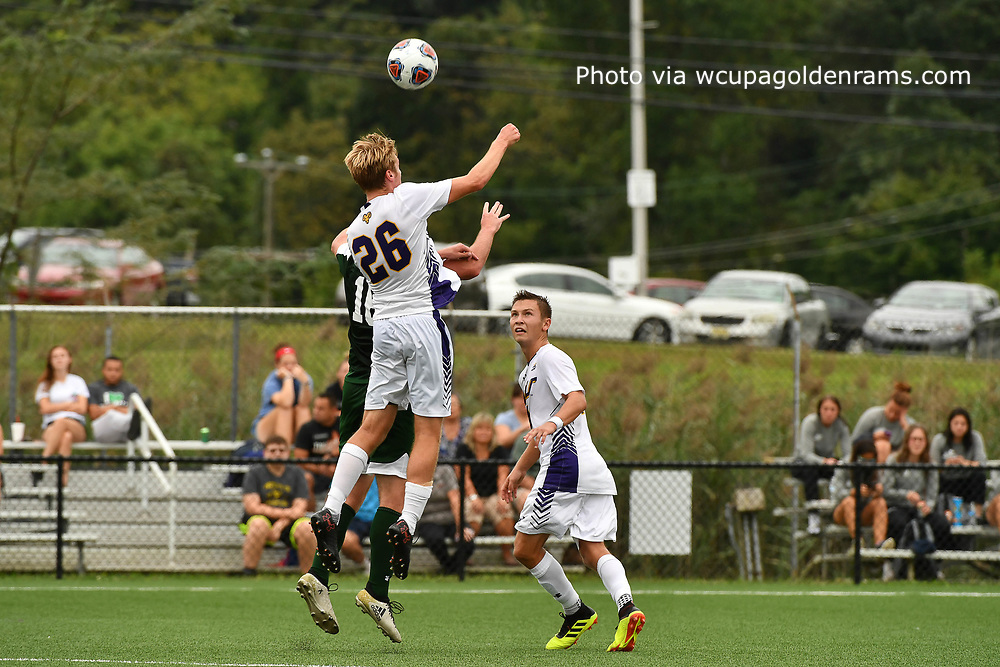 On the road against the first place Gannon University, Rams’ Forward Jason Pixley scored the winning goal to defeat the Golden Knights 1-0 on Friday, Oct. 12.  The goal was set up with an assist from Daniel Grindrod and Pixley’s header made it through the net with less than two minutes left to play.

The Rams’ were elated after Pixley’s goal, especially because of the importance the game had on the standings. The Rams, who are now 5-1-1 in the PSAC (8-2-2 overall), are tied for second with Shippensburg and are just two points behind the 6-2 Gannon.

“We felt we played very well through the entire match and generated some good chances,” Head Coach Michael Benn said.  “When we finally scored the goal, it was a sense of excitement and relief.”

The Rams’ put pressure on Gannon’s defense right from the start. Within the game’s first 30 seconds, the Rams threatened to score with shots from Nick Jachwak and Pixley. But Gannon’s defense wouldn’t break that easily.

It took 16 shots and 88 minutes before the Rams’ persistence would pay off. Gannon’s goalkeeper, Hedi Mehnaoui, made eight saves before Pixley was able to get a ball past him. The goal was Pixley’s fifth of the season.

According to Benn, the Rams’ strategy was aggressive because of the smaller field at Gannon University.

“On the attacking side we wanted to play quickly,” Benn said. “There was limited time on the ball due to the smaller field. We wanted to try to play passes through their midfield so we could run at their backline.”

Defensively, West Chester thwarted Gannon’s attack the entire afternoon. Gannon had only one shot on goal, and it was saved by West Chester’s goalkeeper Will Marshall.

Marshall, a graduate student, was recently named Defensive Athlete of the Month for September by the Eastern College Athletic Conference. He leads the PSAC in goals against average at 0.59, save percentage at 0.842 and shutouts with six.

Marshall took over as the team’s starter after the third game of the season. He formerly played for the University of Pittsburgh.

“Will has been a great addition to our program,” Benn said about Marshall. “He brings a lot of experience from a top-level college program. He has confidence and is a very technically sound goalkeeper.”

Dramatic finishes are becoming a trend for the Rams this season. Last week against Millersville, Dough Goitia scored a winning goal with less than a minute remaining. Back in September, Kyle Hoops also kicked a winning goal in overtime against the University of the District of Columbia.

With five games left to play in the regular season, the Rams are peaking at the right time. They have won four straight contests, and they have outscored their opponents by a score of 11-2 during this stretch. Their defense continues to get stronger, as they haven’t allowed a goal in their last 244 minutes of play.

West Chester will look to keep riding their dominant defense with another conference game against Lock Haven University on Sunday. The game will start at 3:30 p.m., and  will be played in West Chester at  Rockwell field.