Protests break out in wake of Trump’s win 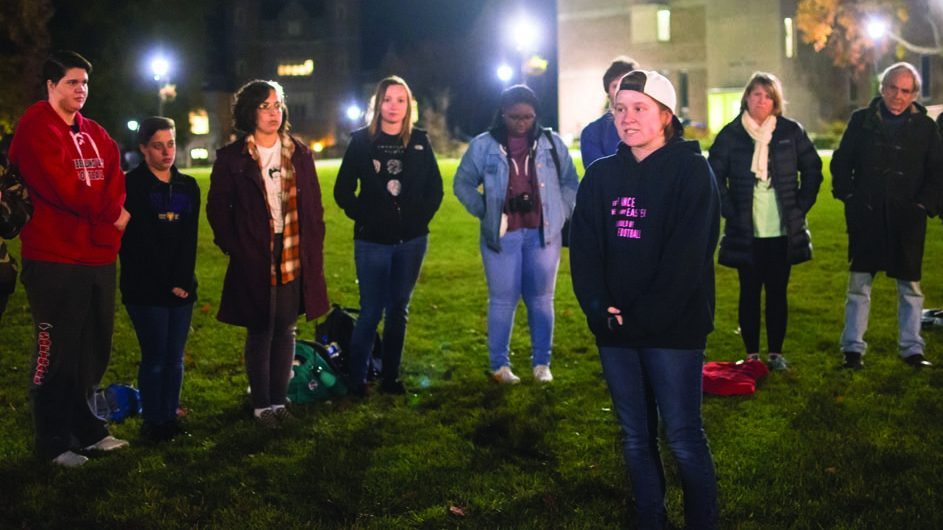 After the announcement of Republican presidential nominee Donald Trump’s win on the night of Tuesday, Nov. 8, protests broke out all over the United States and continued into the weekend. Protests took place in Washington, D.C. in front of the White House and the Supreme Court with protesters holding signs with slogans such as “Dump Trump” or “Not My President.”

Most of these protests were peaceful, but in Portland, Ore. they became violent. According to the Portland police department, protesters were throwing bottles, vandalizing cars and one person was shot. Seventy-one people were arrested.

The man who was shot sustained no life-threatening injuries, and the men who did the shooting have since been arrested. After all the violence in Portland, Ore., the anti-Trump movement spokesperson Gregory McKelvey said, “Violence detracts from the message we are trying to send, but think about why people are angry and being destructive rather than just condemning them for it.”

There are a number of reasons as to why people are protesting the election of Trump. Many Americans are upset about Trump’s immigration policies. Protestors say that Trump cannot just deport 11 million undocumented immigrants that are living in the United States

There is also a lot of anger towards his policies on health care, the environment, Planned Parenthood and LGBT rights. Another reason protesters are marching is because they think Democratic presidential nominee Hillary Clinton should have won because she won the popular vote.

Overall, protesters are angry because of Trump’s rhetoric throughout his presidential campaign. By starting the slogan “Dump Trump,” the protestors are letting the world know exactly what they want.

Thousands of people, in another form of protest, have taken to signing an online petition that instructs the electoral college representatives to not vote the way their states have. Since that is highly unlikely, they’re also calling for Trump to change his policies on immigration and instead of building a wall, they want him to metaphorically build a bridge. The bridge is a symbol to unite the divided nation and to reassure the minority population that they have no reason to be afraid of a Trump presidency.

The slogan “Not My President” regarding Trump resonates with a lot of upset protesters.

Many protesters say that an individual who ran a campaign on fear and hate is not someone they will allow to be their president. They demand Trump address all the hateful things he has said throughout his campaign and realize that his negative rhetoric regarding people of color, immigrants and LGBT people will not stand.

Another group that shares these sentiments is a group from the West Chester University community that came together on Monday, Nov. 14 at 8 p.m. They met in the academic quad to hold a candlelight vigil for WCU members against Trump.

Forty to 50 WCU students, professors and other members of the community came together to demonstrate their feelings towards the president-elect.

They stood in a circle while people took turns sharing their thoughts, fears, personal stories and support for one another. Professors took turns speaking about what it had been like to be an educator during these past few days and offered support to any students that were feeling afraid, anxious or sad about the next four years with Trump as president.

A lot of students shared their own personal stories and thoughts on what they thought the next course should be to protect minorities against Trump’s upcoming policies.

Trump made a statement during his “60 Minutes” interview regarding the anti-Trump protests that occurred in the wake of his election.

Trump said, “I think it’s horrible if that’s happening. I think it’s built up by the press because, frankly, they’ll take every single little incident that they can find in this country, which could’ve been there before. If I weren’t even around doing this, they’ll make into an event because that’s the way the press is.”

On Saturday, Jan. 21, 2017, the day after Trump’s inauguration, there will be a Women’s March on Washington.

This march is to demonstrate that Trump’s derogatory comments about women and minorities will not be accepted by a number of American citizens. This march is also to pay tribute to the 1963 march and civil rights rally on the Washington Mall that was led by Rev. Martin Luther King Jr. During that rally, King delivered his “I Have A Dream” speech. The Women’s March on Washington is also paying tribute to the 1997 Million Woman March in Philadelphia. Men are welcome as it is an inclusive march. At the time this article was written, 70,000 people have RSVP’d.

Kennedy Jirard is a second-year student majoring in communication studies. They can be reached at KJ846459@wcupa.edu.