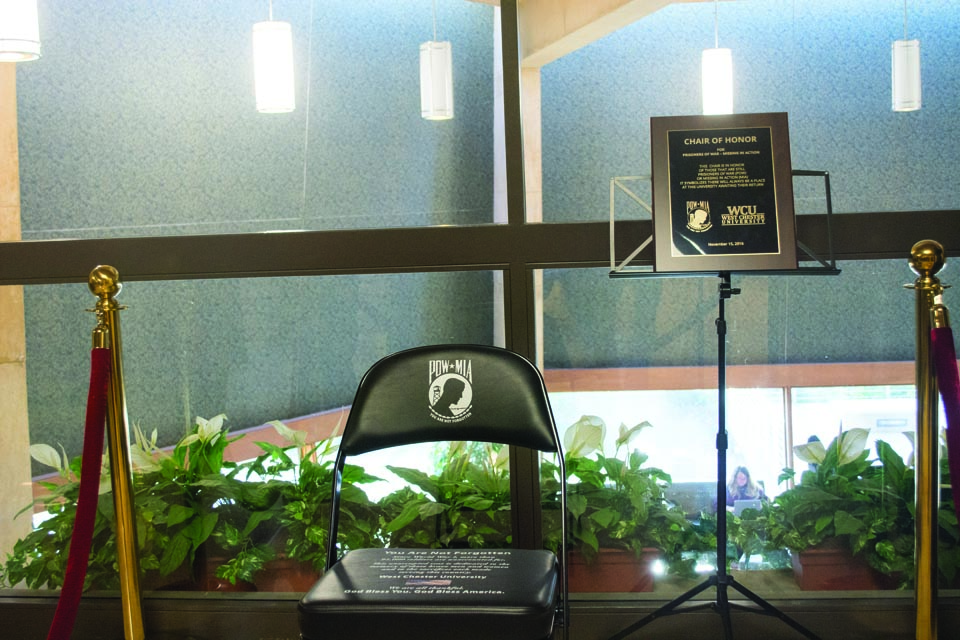 The West Chester University Veterans Center and Student Veterans Group held a ceremony in Sykes Student Union on Tuesday, Nov. 15 to unveil a chair dedicated to the prisoners of war and soldiers missing in action.

Stated to be symbolic for soldiers who have yet to return home, the chair is a sign of respect that was also put in place at Drexel University and Temple University.

The ceremony began with the posting of colors by Justin Wright, Jake Wallace, Arthur Toth and Jack Rowland of the WCU Reserve Officer Training Corps (ROTC) program, followed by the singing of the national anthem by music education major Kyleigh Bleacher.

Veterans Center Coordinator Lillian Morrison then thanked everyone for attending, as well as for the constant support from the university.

“We are very fortunate to be here and to be embraced by so much love and support from our university and the student body,” Morrison said.

Morrison also took the time to thank everyone who served the United States in the military.

“Approximately 10 percent of the American population is made up of veterans. We owe them. We’re in their debt, and I thank you so much for helping us to remember them,” Morrison said.

“More than 91,000 Americans since World War I have been classified as prisoners of war or missing in action. It’s tragic enough to lose a loved one as a result of conflict or war, but to not know the condition or location of a loved one has to be that much more painful,” Fiorentino said. “May this chair symbolize our hope that eventually they’ll all come home. It symbolizes that there will always be a place at this university awaiting their return.”

Student Veterans Group President Sarah Tolley expressed her happiness to have a token of remembrance for POW and MIA soldiers.

“This chair is here for everyone to remember those who did not come home. You are never forgotten,” Tolley said.

Tolley also said that a POW/MIA flag will now be hung at the Veterans Center on campus.

To end the ceremony, WCU alumnus Kyle Risch played Taps on the trumpet while ROTC members carried out the retrieval of colors.

The POW/MIA chair can be found on the second floor of Sykes Student Union between the stairwell and the main staircase.

Dylan Messerschmidt is a third-year student majoring in communication studies with a minor in journalism. He can be reached at DM837837@ wcupa.edu. His Twitter is @DylanMesh.