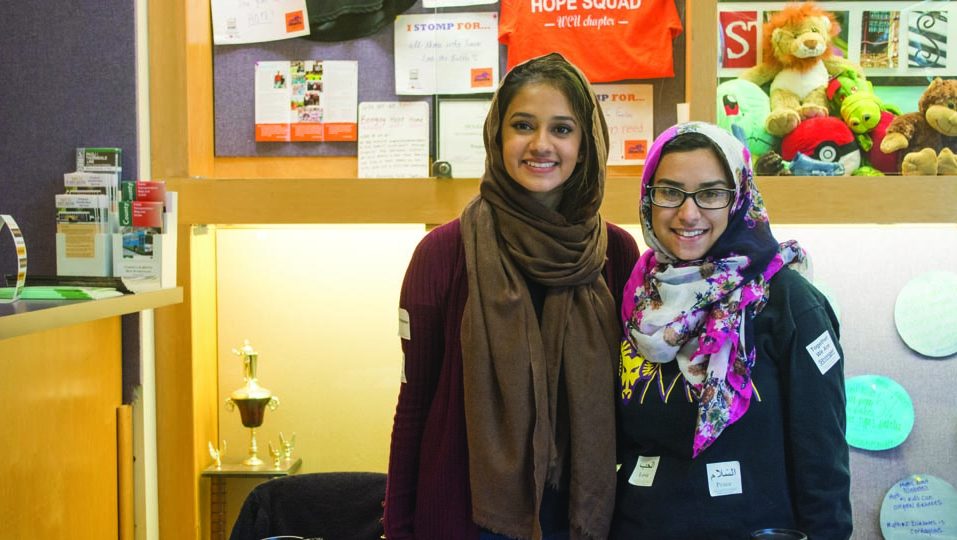 On Friday, Nov. 18, the Muslim Student Association (MSA) hosted Hijabs for Peace, an event designed to show solidarity towards Muslims and minorities both at West Chester University and in the community.

The organization had a table set up in Sykes Student Union from 8 to 11 a.m. on Friday, and members Waneeza Mughees and Kiran Smith handed out stickers and gave more information about the culture and history of hijabs.

Mughees and Smith talked to students and faculty who stopped by the table and showed women who had brought their own scarves how to properly wear a hijab.

A hijab is a head covering that women, many of whom are Muslim, wear as a sign of modesty. It is a religious obligation for Muslim women to wear hijabs, but not all women wear them daily. A hijab is a way for women to show modesty, and even if a Muslim woman chooses not to wear one, she will still most likely dress modestly. Muslim women must wear a hijab when they pray, even if they do not wear one in their day-to-day lives.

Mughees said that last year, MSA had done a similar event in the spring, but because of the high tensions and anxiety post-election, the group decided to host the Hijabs for Peace sooner rather than later.

“After the election, we wanted to have an event to show peace and solidarity to minorities that might have been afraid,” Smith said.

The goal of Hijabs for Peace was to bring people together and show support for minorities on WCU’s campus and in the West Chester community as well. MSA handed out stickers, some of which read “Peace,” “Love” and “Together we are stronger” to those who stopped by the table at Sykes.

People could also sign up for MSA’s email list to get information about future events, like their henna fundraiser and annual Islamic Awareness Week, the latter of which is held every spring and strives to educate everyone on campus about Islamic faith and culture.

Mughees said that the organization faced some apprehension about hosting an event showing any woman how to wear a hijab. One woman who came to the table with her own scarf asked if wearing a hijab would be cultural appropriation and might rub off on people the wrong way.

Mughees said that she had done her own research and concluded that any women could wear a hijab for the event because it showed a peaceful and nonviolent way to get MSA’s message of solidarity across to the public.

“Wearing a hijab is something people shouldn’t feel weird about,” Mughees said.

Both Mughees and Smith donned hijabs on Friday, but said that they don’t wear them in their daily lives. They found that they had received some stares from people that day just by wearing hijabs, but that it was necessary to show people that different cultures do exist, even right here at WCU.

Mughees and Smith said that some Muslim women had stopped wearing their hijabs after the election out of fear of discrimination or harrassment.

The event’s Facebook page posted tutorials to show women how to wear a hijab and photos from the event. People who wore a hijab for the day were encouraged to post pictures on the Facebook page to show their support for the event and for Muslims on WCU’s campus.

For Mughees and Smith, Hijabs for Peace was an opportunity to show love and support for Muslims and minorities on campus.

Rachel Alfiero is a fourth-year student majoring in communication studies with minors in Latin American studies and Spanish. She can be reached at RA806657@wcupa.edu.