PRO TALK: The current predicament of the phillies 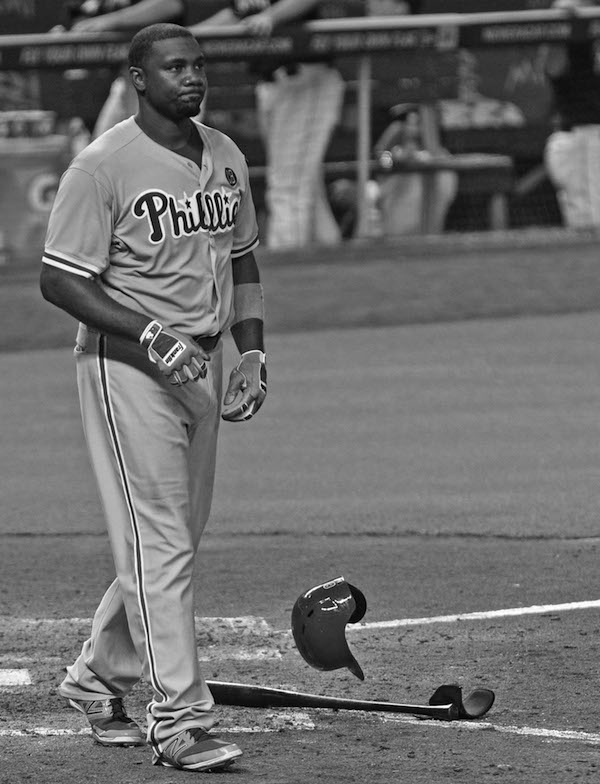 The question for some time now has been when would the Philadelphia Phillies start to rebuild?

That time is now.

Some argue it should have started not one but three years ago in 2012, after the team came off its worst season in years. Others, like general manager Ruben Amaro Jr., argued differently claiming the team was only “one piece away” from contending for the National League East division crown.

Unfortunately, that one piece could not be found, as injuries and lack luster play from those “one pieces” dug the Phillies into a deeper hole.

With the start of Spring Training quickly approaching and in the final year of his contract, Amaro is just trying to cool down the fire under his blazing seat.

Everyone wonders how a team with the highest wins in baseball in 2011 went to being the worst team just one year later. [pullquote]I told him that in our situation it would probably bode better for the organization not with him but without him[/pullquote]

At the start of the 2012 season, it was a given that Ryan Howard would be out indefinitely after tearing his Achilles in game seven of the 2011 National League Division Series. The two shocking injuries that season would be a result of Chase Utley’s knees suffering chronic tendonitis and Roy Halladay’s shoulder giving out.

With injuries to the top of the payroll, a lot of the pressure was on a lineup that was not suited to handle the rigorous 162-game season without their core players being available on an every day basis.

Some could argue that these were the ultimate downfall for the team the city’s beloved but it was the front office moves that preceded and followed these injuries that currently handcuff the front office this offseason.

To start, signing Howard to a massive $125 million extension in 2010 was an extreme mistake. Not because he didn’t deserve the money at the time, but that fact that he was not going to sniff free agency for another two seasons. Howard was nonexistent in 2012 and would have been easy to resign for no more than five million or dumped into free agency due to the fact that he was showing signs of incompetence that we continue to witness.

Now, just five short years later, Amaro is feeling the reprucussions of the Howard deal more then ever. Amaro made his feelings on Howard wideley known recently, stating “I told him that in our situation it would probably bode better for the organization not with him but without him.” With all the time and money Amaro invested into Howard, it’s hard to believe these words coming from the GM.

It is not uncommon to see teams lock up star players with one year left on their current contract but to do it with two years remaining and for a massive price is absurd. Howard’s current situation could have easily been avoided if the front office waited until it was time for Howard to test the free agent market. Traditionally, larger contracts like these never benefit the team giving it out and this is a prime example.

A second unnecessary move came before the 2012 season with the signing of Jonathan Papelbon. If it is not all the crotch grabs, jabs at ownership, and poor performance that make this player untradeable, perhaps look at his massive four-year $50 million contract.

That is the true kicker.

No team is willing to take on a large sum of money for a player who will perform at a par level while providing a weekly headache, which is exactly what Papelbon has done. That being said, he is still a talented arm in your bullpen who some teams may look at as someone to have around come playoff time.

The Phillies management set themselves up for this rollercoaster ride and should have listened to the grumblings coming out of Boston and perhaps looked into the farm system for a player to become a franchise closer for years to come, much like the Braves did with All-Star Craig Kimbrel.

As the game slowly evolves, the “set” closer position is becoming more and more obsolete. Teams use more than one player during a season in a closer, set-up man, and other relief roles.

Fortunately for the Philadelphia ship known as the “Titanic,” this sinking process will not be for an eternity.

In two years with Howard, Papelbon, Chase Utley, and Cliff Lee potentially off the Phillies payroll, the team will be able to look towards the future.

The turmoil of the 2015 offseason is almost over as fans rush down to see Spring Training games in the warm Florida and Arizona sun, looking for prospects of the future and creating scouting reports for their teams in their heads, while players prepare to hopefully prepare for a long season.

For a Phillies team that has virtually no chance according to Vegas’s 300-1 odds on the 2015 World Series, baseball and summer are inevitable.

A championship at the Bank will just have to wait.

Mike Murphy is a second-year student majoring in communications with a minor in journalism. He can be reached at MM802071@wcupa.edu