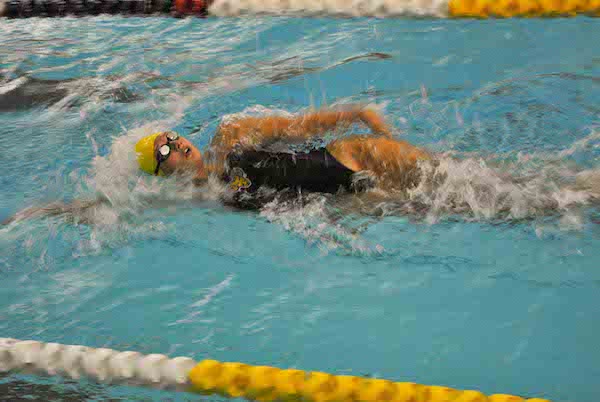 The West Chester University Swimming and Diving teams both fell in non-conference home meets early Friday night against the University of Pennsylvania by scores of 122-172 for the men’s team, and 107-187 for the women’s team.

Matched up against a tough opponent, West Chester could not pull together enough individual victories to bring home a victory for either the men’s or women’s team. For the women, this extends their current five-meet losing streak. On the other hand, the loss was the first of the season for the extremely successful men’s team, bringing their record to 7-1.

Victor Polykova and Dan Roy, two of the Golden Rams strongest competitors were both double winners for the Golden Rams in their respective events, but unfortunately it was not enough as the men fell to the elite Ivy-league squad.

Roy also had quite the impressive showing. Finishing first on the 1m board and the 3m board with scores of 263.18 and 273.30, Roy continued his strong season with the two victories against a tough opponent.

Along with the two individuals, West Chester also got a win from their 200 free relay team. Swimmers Nathan Smith, Evan Sherkness, Dan Sokman, and Bradley Strathmeyer won the race by posting a time of 1:25.07.

On the Women’s side, there was almost an even amount of success. West Chester battled, but again could only accumulate a few individual wins, ultimately falling 107-187.

Kendall Somer also picked up an individual win during the team loss for the Golden Rams. Somer’s time of 10 minutes 37.11 seconds was good enough for first place in the 1000-meter freestyle.

The Golden Ram’s final meet before the PSACs will come Feb. 6-7 at New York University in New York City. With another tough opponent in NYU, West Chester will look for a strong final meet to prepare their minds for the most important meet of the season, PSACs.