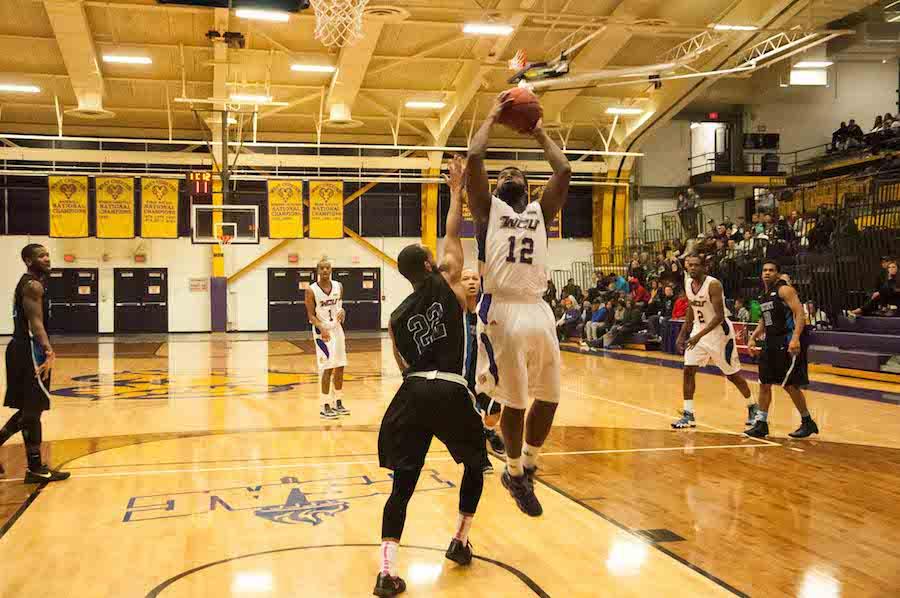 The West Chester University’s men’s basketball team has had a very up and down season thus far. They are currently sporting a 9-11 record, and a 7-7-conference record.

After they started the season 2-0 beating Millersville and Kutztown the team started to struggle as they went on a six-game losing streak. They lost to two out of conference teams, Lincoln University and Philadelphia University in close games. They then fell to four straight PSAC teams, again three of the four games being very close contests. That included a one-point loss to Gannon University, when Gannon’s Matthew Dogan hit a go-ahead three pointer with a minute and a half left, which would eventually become the game-winning basket. Those six losses dropped West Chester to a 2-6 record, and coach Blair searching for answers.

Temporarily they found some answers as they bounced back from their six-game losing streak with a three-game winning streak. They defeated Clarion University, Chestnut Hill College and University of Pittsburgh at Johnstown to try and pull back to .500 on the season. This is a recurring theme on the season, where the team has gone through rough patches, and then tries to bounce back and get back on track to salvage the season.

After the three-game winning streak they went on to lose four of their next five games including two blow out losses to Indiana (Pa.) University and East Stroudsburg University by 20 plus points each game. At this point in the season their record fell to 7-11 and they were really struggling to find a way to win basketball games.

However, over the past two games they have seemed to pick up the pace of the games, and have found more success, as they have won both those games. They defeated Cheyney University on Wednesday night in front of a home crowd at Hollinger Field House. They then went on the road and took out a decent Mansfield team by double-digit points.  In both of these games they scored at least 90 points, and they have only done that two other times during the season, with one of them being a double-overtime loss to Philadelphia University. In their game against Mansfield on Saturday, junior Avery Brown, who has been struggling from the field this season had a breakout game. He had 18 points on 6-7 shooting from the field including 3-4 from beyond the arc. Matt Wiseley led the Golden Rams with 12 rebounds. Matt Wiseley and Cory Blake each added 14 points in the victory. It was a game where West Chester controlled the entire time from start to finish, with the lead only switching once early in the first half.

It was very similar in their game against Cheyney, which they won 95-62, against the basement team of the PSAC. Blake led all scorers with 16 points, while Mike Wilson added 15 points on five three-pointers. Wiseley stuffed the stat sheet as he had ten points 7 assists and four steals in the biggest win of the season for the Golden Rams. Not the biggest win in terms of importance, but more in terms of point differential.

Junior transfer Logan Stumpf was installed in the starting lineup for the past two games. He brings an outside scoring threat along with a tough, defensive mentality that so far has paid off for the Golden Rams.

Their offense is starting to pick up some traction, and their defense is creating turnovers, which leads to fast break points and a better offense.

Cory Blake leads the team in scoring with 14.1 points per game while junior Matt Wiseley leads the team in rebounding and steals, with 8.2 and 2.3 respectively. The problem the Golden Rams have is the excess amount of turnovers they commit and the lack of assists they dish out. Having said that they are 17th out of 18 teams in the PSAC in assist to turnover ratio. Their leading assist man is Parrish Grant with three assists per game, while the next closest is Raheem Hall with just over two a game. “We have to focus on playing smart basketball in order for our team to be successful. We have shown that we can do it, we just need to be more consistent.” stated Wiseley. If they can find a way to switch their trend with assists and turnovers then they will have a good chance to bounce back the rest of the season and make the playoffs. They are a very talented team, they just need to find which pieces fit where, and I believe they are en route in doing that.

They have eight games remaining, with five of them being at home. Right now they are sporting a 9-11 record, and if they can find a way to win five or six of the final eight games then they will more then likely find a way into the PSAC playoffs, and who knows what can happen. A team is always most dangerous when playing their best basketball at then end of the season. So the only question remaining is can they build off of this two-game winning streak that they are currently in, or will they revert back to their ways earlier in the season and continue the roller coaster ride? With a couple important conference games approaching,  you will have to watch to find out.