Sanchez to the rescue? 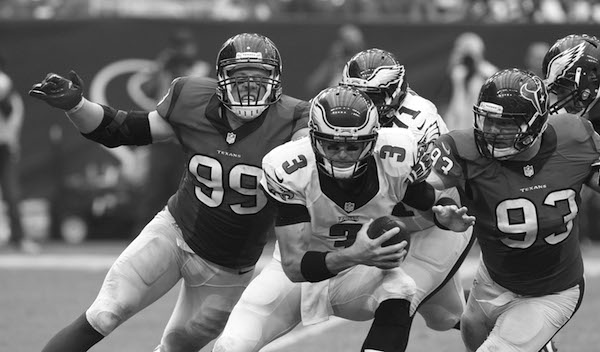 The Eagles are set to take on the Carolina Panthers on Monday Night Football at Lincoln Financial Field, with Mark Sanchez under center.

That is the question all Eagles fans are asking themselves after the news broke that QB Nick Foles will be out six to eight weeks with a broken collarbone. With Foles sidelined, Sanchez must step up in prime time for his first start in well over a year. Sanchez was out all of last season with a shoulder injury, spending his time mentoring then rookie QB Geno Smith in New York.

This offseason, Sanchez was released by the Jets, and the Eagles signed him to a one year contract. He was signed to be the backup. Just in case Foles was unable to go, the Eagles would still have an experienced quarterback at the helm. It’s a good thing they signed him.

Foles went down hard on his shoulder with seven seconds left in the first quarter, and it was immediately evident that he was not going to be able to get up and continue playing in the game, a nightmare for Philadelphia fans.

Sanchez entered the game, tied at 7-7, and began to show some of the poise and ability he showed in the preseason, completing his first three pass attempts, capping the drive off with an 11 yard touchdown to rookie wide receiver, Jordan Matthews.

The touchdown to Matthews was Sanchez’s best throw of the day, lofting it over the Houston defender and dropping it perfectly into Matthew’s outstretched hands, hitting him in stride where only Matthews could make a play on the ball.

On the Eagles’ next drive, Sanchez delivered a catchable pass to rookie wide receiver Josh Huff, hitting Huff in the hands. Huff was unable to secure the catch, popping it up in the air right into the arms of Texans cornerback Jumal Rolle. Rolle would intercept another of Sanchez’s passes, this time late in the third quarter.

Sanchez made one other bad pass against the Texans, when, in an attempt to throw the ball away while alluding a pass rusher, he threw behind his receiver, directly into the hands of the Houston defender. Luckily for Sanchez, the ball was dropped, and he was able to avoid throwing his third interception of the day.

Sanchez finished the game completing 15 of 22 passes for 202 yards, two touchdowns and the two interceptions.

Overall, Sanchez looked sufficient in the three quarters he played as the Eagles quarterback. He made some great passes, like the touchdown to Matthews and the 74 yard completion to Jeremy Maclin, but he also had some bad decisions, like the dropped interception, and the two interceptions to Rolle.

In the end, Sanchez was able to lead the Eagles on a 15 play, 80 yard drive that took eight minutes off the clock in the fourth quarter to stretch the lead to a two score game, virtually sealing the deal for another Eagles victory.

Regardless of the bad passes, which Sanchez has shown throughout his career will happen, Sanchez was able to come up clutch during the most important part of the game, late in the fourth quarter with the game on the line, and  he was able to get the Birds the win. That’s all the fans can ask for.

Monday’s game is a game that the Eagles need to win in order to stay atop the NFC East, and stay in the discussion as one of the top-tier NFC teams. Carolina is struggling mightily right now, posting a 3-5 record and currently riding a three game losing streak. The Panthers will be eager to break that streak, so it is essential that Sanchez and the Eagles offense is able jump out to an early lead against the Panthers.

Falling behind could be detrimental for a quarterback who has not started a game in over a year, especially considering the game is under a national spotlight.

The Panthers defense looks like a shell of what it was last season, and quarterback Cam Newton is having the worst season of his young NFL career, but the talent level is still there. Newton is a very dynamic quarterback who is not afraid to run the ball and with linebacker Demeco Ryans out for the season, the responsibility to spy on Newton will fall on Mychal Kendricks and Casey Matthews.

Sanchez looks to lead another victory for the Eagles over the Panthers Monday night starting at 8:30 p.m. The broadcast will be on ESPN.