Lady Rams heading to the playoffs 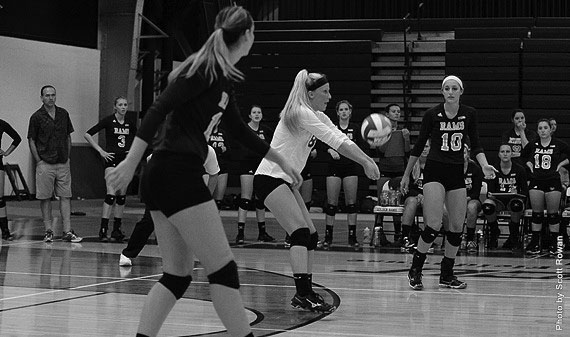 West Chester University women’s volleyball team entered the final weekend of the regular season looking to gain a postseason berth. They had to face a good Kutztown team and a struggling East Stroudsburg team.

The big game was against Kutztown on Friday, they needed to win in order to control the head-to-head, if they would be tied at the end of the regular season.

West Chester did not start off  well against Kutztown, as they dropped the first set 25-18. They needed to be able to bounce back in the second set, so they didn’t face a 2-0 hole. Bounce back is exactly what they did. They came out and dominated the second set 25-17. But as the match continued it became obvious that this game was going to be teeter totter game. That being said the third set went to Kutztown 25-19. Again West Chester needed to be able to bounce back from a losing set to keep their postseason hopes alive. West Chester did just that, they fought and won a tough, close set 25-22, to tie it up at two sets apiece. So it would come down to the final set, playing to 15 instead of 25. West Chester came out of that fifth set and took a 6-2 lead that Kutztown was not able to bounce back from, and West Chester took the fifth set 15-9, winning the match three sets to two. A huge win for West Chester, gaining momentum heading into the final regular season game.

The final game of the season was against a poor East Stroudsburg team, and it was senior day for the Lady Rams. The lone senior, Julia O’Brien came out firing, registering 20 kills in the three to zilch match victory over the Warriors. O’Brien was able to register 42 kills over the weekend, while teammate Marina Sharkey registered 20 kills. This weekend went all right for the Rams, and they will now post a 20-13 record heading into the PSAC playoffs.

West Chester will need big play from their biggest players. From the regular season the leaders on the team are Julia O’Brien who has 395 kills, followed by Marina Shareky with 275, and behind her is Victoria Cruciani with 159. Annalee Halbert is also a crucial key on this team. She is the main setter for the team, which allowed her to garner over 700 assists on the season. The next closest on the team is Macon Frey with just over 200 assists. They are also clicking at the right time, as Sharkey stated, “we have really come together in the last part of the season, and I think we are playing our best volleyball thus far. We are excited and eager to see what the posteason has in store for us.”

The playoffs will begin on Tuesday when West Chester will travel to Pitt-Johnstown for the first game of the postseason. West Chester split the season series with Pitt-Johnstown. They won the match that was at home 3-1. However, they did drop the road match against them, 3-1. So they will need to find a way to play as a team on the road and move onto the next round.