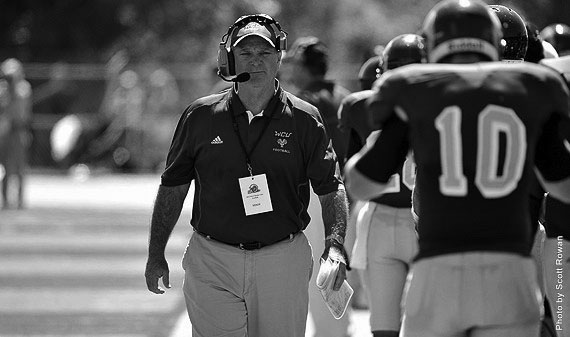 Brandon Monk and the West Chester University Golden Rams football team trampled over the East Stroudsburg University Warriors on Saturday, winning by a score of 35-24.

Despite a late rally from the Warriors, the ground attack of the Rams was just too much for ESU to handle. Monk had a career day, carrying the ball 36 times for 257 yards, a career high. Monk also found the end zone twice in his dominant day, scoring two touchdowns. Glimpses have been sighted by Ram fans of Monk’s killer instinct throughout the season, but after Saturday, Golden Rams faithful can be confident in their running back as the postseason quickly approaches.

Standout senior quarterback Sean McCartney held somewhat of a quiet role for the Rams Saturday afternoon, outshined by the performance of Monk. McCartney still posted a solid stat line, throwing for 171 yards on 12-21 passing. He also capitalized three times on touchdown passes. McCartney, who has been struggling as of late, threw one interception on Saturday, but with the help of his running game opening up the Rams play-action, McCartney found a way to still get the job done.

The Golden Rams offensive line played one of their best games to date. If there was a specific stat-line for an offensive lineman, you can surely believe that West Chester’s would have been great. Whether keeping McCartney protected in the pocket, or providing holes for Monk to explode, the offensive line certainly pounded away all day at the ESU defensive line, taking them out of the game as best as they could. Offensive lineman and their importance to a football team often go unnoticed, but this group of individuals deserves all the credit in the world for the job they have done in the trenches this year.

Tim Brown also provided another excellent game for the Rams at tight end, catching three passes for 43 yards and two scores. Brown now has 12 touchdown receptions on the year, a team high, and has certainly become one of McCartney’s most consistent, and favorite targets.

Aiding Brown in the receiving core was Mike Doty. Doty caught four passes for 72 yards, along with a touchdown. Doty has been a strong receiver for West Chester all season, despite sometimes flying under the radar compared to Erick Brundidge. Brundidge finished with just two catches for twenty yards.

The Golden Rams’ powerful defense came up big down the stretch on Saturday, holding off ESU in their late attempt at a comeback. Leading the way for West Chester was the dynamic linebacker duo of Mike Labor and Ronell Williams. Labor and Williams combined for 13 tackles in the middle, while attempting to shut down ESU running backs Robert Healy and Derrick Dyer. When at their best, Labor and Williams are one of the most dangerous linebacker pairs in the conference. Both are still climbing the West Chester record books, in hopes of going down as two of the all-time greats to suit up in the purple and gold.

Despite throwing for 266 yards and three touchdowns, Warriors quarterback Bruce Campbell was picked off three times by the West Chester defense. Al-Hajj Shabazz grabbed his team-high third interception on the season, along with two more coming from Blaise Schieler and Brandon Pepper.

Pepper had a chance at an interception at the six-minute mark of the fourth quarter, but it fell through his hands. Pepper didn’t have to wait long for another chance due to a lobbed pass down the sideline from Campbell, making an extremely athletic play to intercept the pass right in front of the West Chester goal line. The West Chester defense jumped on the opportunities present by ESU mistakes, and certainly made them pay.

West Chester jumped out to an early 14-0 lead in the first quarter, but a strong third quarter from the Warriors landed the score at 28-24 entering the fourth quarter. After an ESU punt, the Rams received the ball right around the 11-minute mark. A time-consuming five-minute drive, orchestraed by McCartney and Monk, finished with a Brown touchdown from McCartney, the last score of the game, which left the score at 35-24 as time expired. Peppers interception came after the Brown score, as ESU attempted to march back down the field.

Still feeling the repercussions from the tough loss at Bloomsburg, a big conference win against a strong opponent could not have come at a better time. As the postseason approaches, this win will surely be taken into account by national tournament voters.

West Chester currently sits at second in the PSAC conference, trailing Bloomsburg due to the loss two weeks ago. All roads seem to lead to a possible postseason showdown between the two teams, who have battled hard against each other in the past seasons.

Last season, after dropping the PSAC championship to arch-rival Bloomsburg, West Chester was presented with an opportunity of vengence come late-November. When the match-up arrived yet again between the Golden Rams and the Huskies, West Chester did not let their second chance slip away.

Perhaps the win on Saturday was just what the Golden Rams needed to re-fuel themselves as late-November football approaches. With this strong win under their belts, the Rams will look to make a final push and find their way back into the Division II National Tournament.

Next up for West Chester will be Indiana University of Pennsylvania (IUP) Saturday. The Rams travel to IUP looking to take advantage of an up and down team that currently sits at 6-4. Another PSAC win would be huge for WCU, as the national tournament standing are beginning to take form. West Chester must win at IUP on Saturday if they want to have a shot at a spot in the national tournament. Coming off to big-time wins, IUP is the final barrier that the Rams must bust through to reach their ultimate goal.