Men’s and Women’s tennis gets sliced 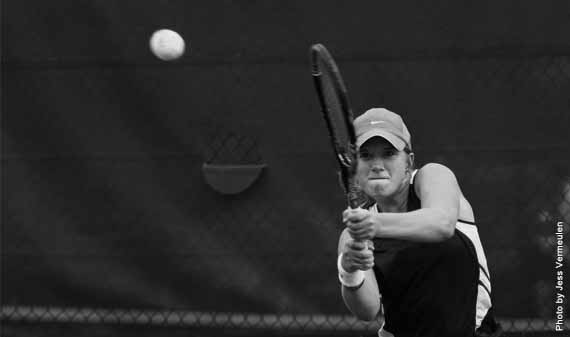 The West Chester men’s and women’s tennis teams continue to struggle as they come down to their final weeks of the season, as the men currently hold a 4-7 record, while the women hold a record of 4-9.

Coming back from their trip to Florida, where the men’s team went on to lose all three games played there, West Chester looked to rebound against the University of Sciences. Hosting their opponents, West Chester suffered a brutal loss, as they fell to the University of Sciences with a final score of 5-4. It marked the Golden Ram’s fourth loss in a row.

J.J. Cooke, a senior from Harrisburg, Pa., had a 6-2, 6-4 win at sixth singles to help the Rams in their battle against their adversaries, but it was not enough to put them away. Other players who notched victories included Lars Kristiansen, the team of Andrew Peterson and Connor Dunn, as well as the team of Jared Howatt and Cody Leimback.

West Chester next visited their rival Bloomsburg University in a PSAC matchup, finally breaking their losing streak and picking up a 5-4 victory.

Cooke yet again helped the Rams by picking up a victory in singles competition, getting a 6-4, 6-4 straight-set win. Howatt won his first match at No. 1 singles with a 6-4, 6-3 victory. Kristiansen got West Chester their third singles victory with a 6-2, 6-1 win.

Howatt and Leimback picked up their second doubles victory in as many days, with Kristiansen and Jimmy Aridas scoring a victory as well.

However, West Chester’s victory was short lived, as West Chester would fall to Edinboro University with a final score of 6-3.

Howatt and Leimback had quite the impressive win in doubles competition, taking a 8-5 victory against the Fighting Scots. Kristiansen and Cooke also racked up victories in singles competition, but alas, it was not enough to overcome Edinboro.

Upcoming games for the men’s team include two PSAC opponents, as West Chester will go against Kutztown University and Millersville University this coming week.

The women’s team has not looked too great, either. Before returning in March, the Lady Rams held a 3-5 record within the months of Sep. and Oct. With their season continuing in the spring semester, West Chester looked to turn their losing record into a winning one, but that has yet to be the case, as the team has lost four of five since returning.

The women’s team traveled to Fla. as well, but could not rack up any wins for the purple and gold in their time there. The team suffered crushing losses, as they went 0-9, 1-8, and 0-9 during their trip. Only the doubles team of Casey Branigan and Stephanie Cifarelli pulled out a win, narrowly edging out their opponents for a 9-8 win.

West Chester’s Lady Rams then came back home to host East Stroudsburg University, where they got back on track by beating their opponents 6-3 in the PSAC opener.

Doubles competition included wins from Shaak and Nicole Fahringer, as well as the team of Abriana Nolan and Haley Wissinger.

Unfortunately, just like the men’s team, the victory was not to be celebrated for too long, as the women’s team would go on to face Bloomsburg University on their turf in a losing effort, falling to the Huskies 6-3.

The three victories from the Rams against the Huskies came from Shaak and Nolan in singles competition, as well as Shaak and Nicole Fahringer in doubles.

Though the team has most certainly struggled this season, there have been a few bright spots on the roster. Shaak has played quite well in the face of the team’s losses, scoring multiple victories during these matches. Being that Shaak is only a freshman, this team will have a playmaker on their hands for years to come.

The women’s team now has four PSAC contests coming up, with Shippensburg University, Cheyney University, Kutztown University, and Millersville University all on the horizon. If the Lady Rams want to end this season on a positive note, they will have to start playing their best tennis against these four formidable teams.