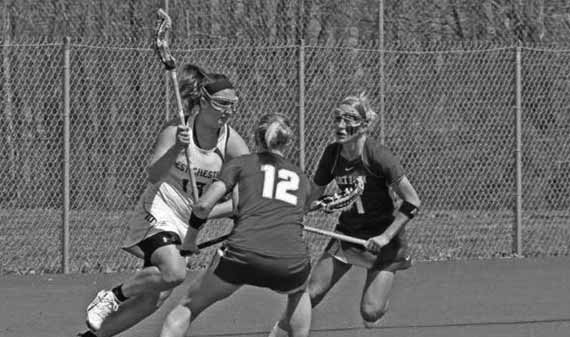 After falling in two tough matchups last week, the West Chester University Lady Rams entered the new week ranked 13th in the country, six spots lower then their previous ranking of 7th. After the tough overtime loss against Mercyhurst University, the Rams will have a chance to bounce back in two tough conference matchups playing against Millersville University and archrival Lock Haven University.

Millersville traveled to Vonnie Gros Field to face WCU on Tuesday afternoon, April Fools’ Day, looking for a possible upset over the West Chester squad. West Chester wouldn’t be fooled on this April Fools’ Day, as the Rams took a dominant road to victory by controlling both the offensive and defensive ends of the game, resulting in a 21-8 victory.  The loss is Millersville’s third straight defeat while hopefully the win will be an effective bounce back victory for the Rams.

Senior defender Juliane Williams scored her first career goal just two minutes in for West Chester to jump out to an early one-goal lead. Williams’ goal came off a rebound of her shot, scooping the ball up and finding the back of the cage.

WCU jumped out to an early 7-2 lead in which Millersville could never really recover. The Rams controlled all pace at the offensive end and was dominant on defense. Sophomore Hannah Cowan once again provided the offensive spark for the Lady Rams, adding six goals and one assist. A familiar stat line was also posted from freshman Dina Cifeli with two goals and five assist. Cifeli has continued to find ways for her teammates to score throughout the beginning of the season; she leads the team with 35 assists.

The victory for the Rams improves their record to 6-2 and 3-2 in the PSAC. The dominant win also helped provide confidence entering preparation time for the Rams toughest matchup of the season, archrival Lock Haven University on Saturday afternoon. In last year’s meetings against the two teams, WCU fell in the first meeting, 6-11. West Chester found its revenge, beating Lock Haven in the PSAC final on their home turf, 8-7. The rivalry between the two teams has certainly grown strong over the recent years. Seven out of the last eight PSAC title games have been played between our West Chester Rams and the Lock Haven Eagles.

Saturday’s game was a grudge match like any other game between the two.

Despite the Tuesday win against Millersville University, WCU’s national ranking dropped again from 13th to 15th, while opponent Lock Haven sat at eighth.

Throughout the first half the possession for power was a tug-of-war match. With the first half dwindling down, Eckert found the cage to pull the Rams within one goal entering the second half. As the second half began, the Eagles stretched their wings and took over the game. The Eagles struck four times in the last 20 minutes to control the game and eventually seal the win, 6-9.

Cowan added three goals again for the Rams and Cifeli assisted on two goals. Heidelbaugh and Speers added the other goals for West Chester. The Rams had their scoring chances, but Lock Haven goalie Chrissy Baffuto stood her ground in net making nine saves.

The loss comes at a tough time in the schedule for the Rams, who have now dropped two out of their last three games. Lock Haven is currently thriving, with this win adding on to what is now a five-game win streak. The rivals could meet again in PSAC playoff play, but that will depend on seedings and such when the time comes.

Despite the excellent play of Cowan and Cifeli, the Rams still seem to not have it all together yet. The pieces are in the making, but as the midway point of the season approaches, the Rams need the pieces to start making the puzzle. Next up for West Chester is the 5-5 Gannon Knights on Wednesday afternoon. Hopefully, the Lady Rams can use the recent losses to fuel their tank and propel themselves on a winning streak through the rest of the season.