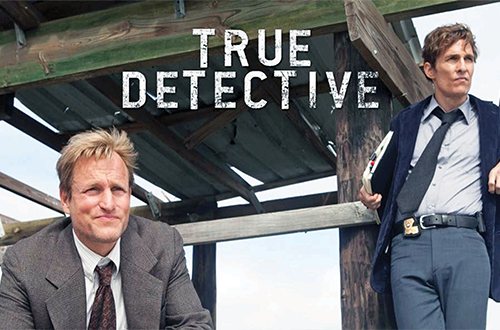 Are you a fan of detective shows such as CSI or Hawaii Five-0? These are the more conventional detective shows where one case an episode is typically solved within the one -hour parameter. HBO’s True Detective is the latest in the mystery and suspense genre, which has evoked a new model for their show. The show strays away from the norm of solving the case in one episode, as the two detectives Rust Cole and Martin Hart are out to solve one case, which has many twists and turns. The show focuses on these two detectives retelling their accounts of how they solved cases, to give other current detectives insight about their techniques for figuring the answers to crimes today. The flashbacks go back to the 90’s where both Cohle and Hart discuss their stories on how they perceived them. The show takes place in the swamplands of Louisiana, where Cohle and Hart drive around looking for clues to piece together the case at hand.

Cohle is played by Mathew McConaughey, who plays his character to perfection. If you have any doubts about Mcconaughey as an actor, you won’t after watching his performance in this show. He takes on the role of a detective who has seemingly lost his mind after the tragic passing of his daughter years back. This in turn changed Cohle to become a pessimistic atheist who questions everything, and does so with deep philosophical statements.

Cohle’s partner, Hart, is played by Woody Harrelson- who also does a tremendous job of portraying his character. Together they are teamed up to solve to cases, but the show focuses on only the case of one particular serial killer on the loose. Cohle and Hart clearly have their differences, as they tend to argue throughout the course of the show, but deep down they respect each other, and the value that they bring to force. Cohle is a habitual drug user, but is clearly devoted to the mission at hand.  He is constantly looking for any clues to solve all the glaring questions. His character has a reputation for being one of the best interrogators in the department, as he has stated, “I’ve never been in the room for more than one minute where I didn’t know if the guy did it.” Hart on the other hand is a more seasoned veteran and has more respect around the department, and is a hard nose who becomes enraged easily. Hart has problems in his personal life, which at times, conflicts with the work that needs to be done.

The combination of McConaughey and Harrelson is fascinating to watch; as they deliver their lines so smoothly. They appear natural together on screen, and in turn have marveled fans and viewers alike.   Nic Pizzolatto, the show’s creator has found a way to creatively pair mind-boggling dialogue, with action scenes that are superb. After the fourth episode of the series, fans took to the web to share their thoughts on the amazing six-minute tracking shot they just witnessed. A tracking shot, or a long take, is when the camera doesn’t cut to another shot. Basically the camera followed McConaughey through a myriad of houses, where he was being constantly shot at.  Those six minutes may be considered one of the  greatest suspense scenes in TV history.

With Boardwalk Empire concluding next year, HBO needs a new show to fill the gap, and True Detective might just be the answer. Although, there rumors have been rumors that a whole new cast will be in the second season, which means McConaughey and Harrelson may not be reprising their roles. If that is indeed the truth, the show will lose significant value. For us fans, let us hope that is not the case.