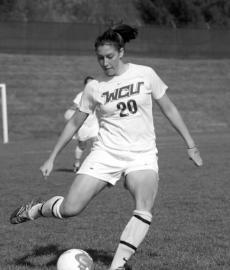 Sophomore Brittany Yetter has not only returned to the classroom wiser, but she has also returned to the field wiser, making no foul moves on the field this season. Since she was four years old, Yetter has always been surrounded by soccer. Soccer was a Yetter family tradition-with parents acting as coaches and siblings as players-Yetter has pretty much been around soccer fields her entire life.

“I’ve grown up with it; it’s always been apart of me,” Yetter said.

Nonetheless, early into her collegiate career, Yetter was recognized as an All-PSAC first team recipient. Yetter evinces that it speaks volumes about the team.

“It was a shock to come into a team my first season and receive this title,” Yetter said.

With this achievement, Yetter has established a fine-tuned mental preparation on and off the field.

On her own time, Yetter stresses the importance of finding “the right state of mind” in addition to having the same routine before each game.

Her mental state, she said, is a “calm, excited adrenaline rush.” This fosters an equally crucial point-timing.

The time spent in the locker room and the amount of time preparing on the field makes a difference, and from here, works hand-in-hand with maintaining that focus. Ultimately, Yetter states that with these factors, the real goal can be kept in mind: defending the title.

Her greatest challenge thus far, however, was unrelated to a particular game. Specifically, it dealt with the idea of beginning again.

“[I had to prove] to the new coach that I deserve a spot on the team. Last season I had to prove to my old coach; I had to re-do it this year,” Yetter said.

This year’s coach, Gerry Lucey, has, according to Yetter, “done a lot for the team” in that he “knows how to prepare us for any situation that we face.”

Even for situations that occur more than once. This season, the women had to face Indiana University of Pennsylvania (IUP), four times-three times were victories and the fourth one, Sunday Nov. 5, would determine if the women would win the NCAA Division II Northeast Region. The women proved that outcomes can happen more than once-for the second year in a row, the title was theirs.

According to Yetter, she knew that they could beat IUP again.

Although there was a possibility of losing, according to Yetter, “we overcame that.”

This idea of beginning again and trying even harder is a very prevalent theme in Yetter’s career. According to Yetter, “hopefully, (they’ll) make it this far again in the next two years” and continue making it to the National Finals.

Yetter undeniably has a vision for her career. Her interest in mathematics, according to Yetter, helps her visualize the field on a geometric and cognitive level. But most importantly, this vision is of great avail to her passion: “being on the field.