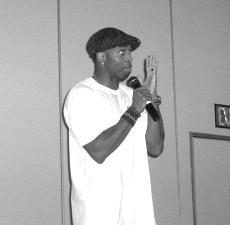 When you put together college, “Girls Gone Wild,” the dairy queen, marijuana and a deer, you are sure to have an unforgettable night of laughter. Melissa Rauch from “VH1’s Best Week Ever” and Ty Barnett from “NBC’s Last Comic Standing” performed at Sykes Student Union on Thursday night. When Melissa Rauch, a young five-foot blue-eyed blond girl, walked on stage, the crowd seemed to be unsure of what to expect. But Rauch’s quick-witted comedy and exaggerated facial expressions quickly proved the saying that “good things come in small packages.”

This comedian had no problem laughing about her own faults, claiming that she was so short that her driver’s license said “actual to size.”

She went on to talk about relationships, in particular about how men and women always put up a front in the beginning of a relationship, which she called the “audition phase,” yet when their true colors show they make you want to say “this is what I bought?” The crowd was ecstatic.

Rauch brought fun material that college students could relate to. She talked about “Girls Gone Wild” and how they should remake it to show what actually happens in college petty roommate fights and girls getting so comfortable that they pee with the stall door open.

She also expressed her love for cereal, which many students related to as they shared their favorite cereal. Cocoa puffs was her favorite cereal until she noticed the new edition box said, “now made with real cocoa.”

“What was it made with before that turned my milk brown!” The crowd went wild. Ironically, this comedian’s act definitely did not fall short. It is no wonder why she was named “Best College Comedian” on MTV’s “TRL.”

She then introduced Ty Barnett, an African-American Chicago native whose motto is “love everybody.” Barnett kept it real with West Chester students by beginning with the statement, “If you get offended feel free to keep that shit to yourself.” At that point he got the crowd hooked on to his authentic and outgoing attitude.

The crowd loved Barnett as he used a unique and creative spin to bring awareness to serious topics like race, drugs and sex.

He spoke about his bad experiences at the airport and how he is always “randomly selected,” and how he “drinks to make other people acceptable.”

Every one of his jokes had a meaning behind it and left the audience thinking, and out of breath from laughter.

Barnett shared his feelings on how he thinks that stereotypes should be switched among races every thirty days, so when he gets stopped by a Caucasian officer and the officer tells him “You fit the description,” he can say, “Well if you check your calendar you would see that you fit the description.”

Barnett went on to say that he would be racist but he “just doesn’t have the time,” and spoke about how he feels that hatred takes a lot of energy and that if you are going to hate someone then make it a good reason, not just because of their skin color. Barnett was able to keep the crowd rolling with his ability to relate to people of all backgrounds and talk about topics that affect everyone.