Comedians headed to WCU for a night of laughs 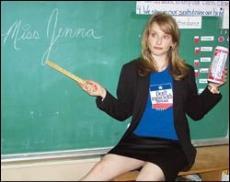 On Thursday, November 16, the Student Activity Council (SAC) will present comedian Ty Barnett with special guest Melissa Rauch, in the Sykes Ballrooms at 8:00 p.m.
Barnett, who has made appearances on Comedy Central Presents, The Tonight Show with Jay Leno, and The Late Late Show with Craig Ferguson, made his claim to fame on the reality TV show “Last Comic Standing.” It was during season four of the popular series that he placed second, behind Josh Blue. He started performing stand up while attending a very diverse school in Chicago.
Following his graduation, he began taking his show on the road, stopping along the West Coast in both California and Oregon, and even making his way up to Canada. This eventually led him to his first television appearance, on the career-maker program “Star Search.” He’s also been covered by publications such as the Hollywood Reporter and Maxim Magazine.
Barnett’s routine has been described as “hysterically funny, smart, and edgy,” and he has been compared to classic comedians like Richard Pryor, Bill Cosby and George Carlin.
Melissa Rauch, who has been described by the New York Times as “a pretty, quick-witted comic,” has had a very elaborate career that extends beyond her stand-up comedy. She is probably best known to mainstream viewers as a panelist on VH1’s “Best Week Ever.” She has also made headlines as an actress, specifically in her award-winning, one-woman show “The Miss Education of Jenna Bush,” which centers on President Bush’s daughter. She was last seen on the silver screen alongside Steve Buscemi and Minnie Driver in the film “Delirious,” written and directed by Tom DiCillo.
Come out and check out these two very funny and upcoming comics in the Sykes Ballrooms this Thursday night. Admission is free with a WCU Ram-e-card.