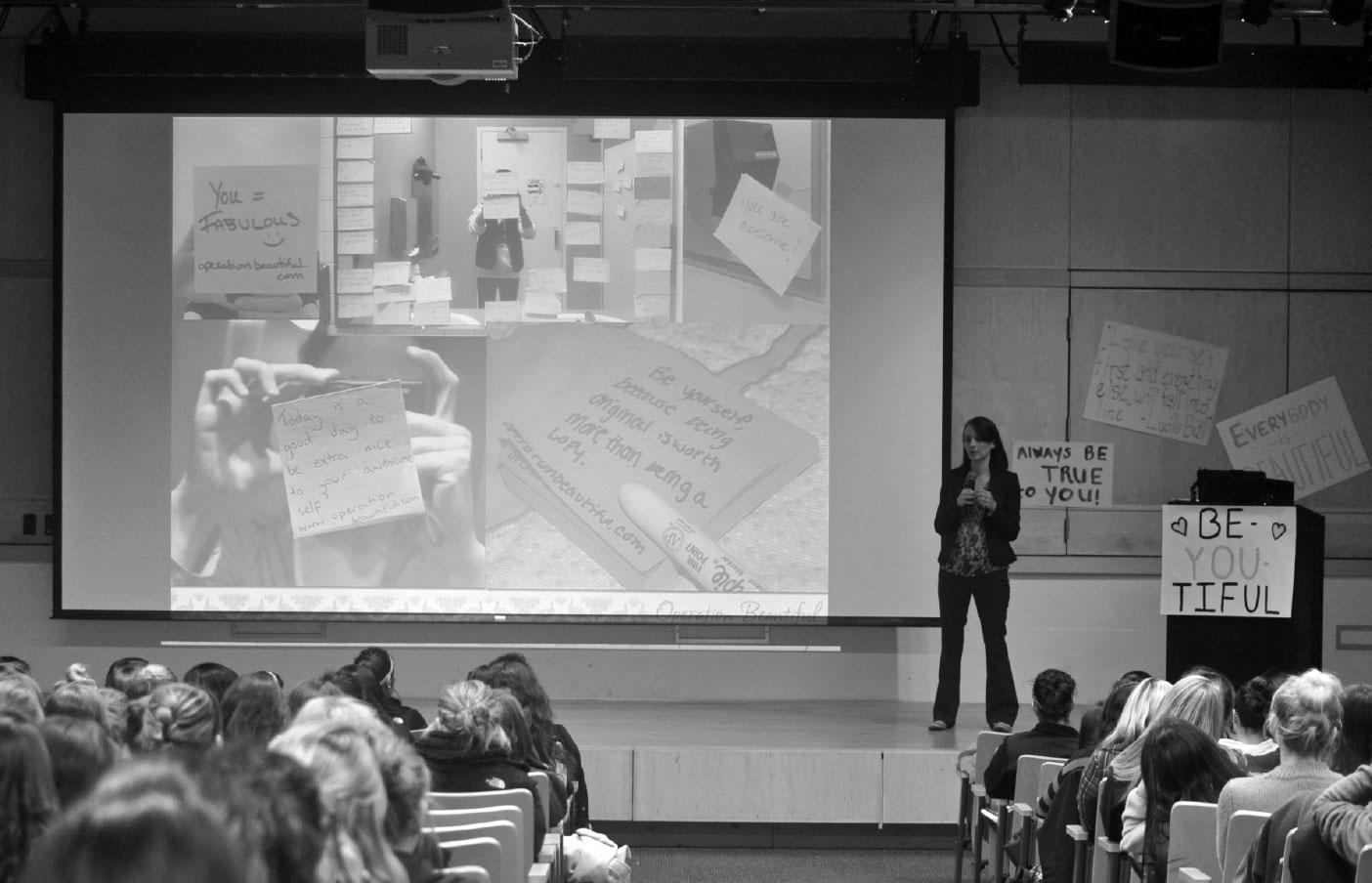 Like many of the other events held last week, Boyle’s visit was put together by members of Sister to Sister, a group made up of women belonging to each of West Chester’s sororities.

After a short introduction, Boyle spoke to a room full of students in Sykes Theatre from 7:30 to 8:30 p.m. about the importance of a positive self body-image, and the ways that the media makes that difficult.

Operation Beautiful was founded in 2009, while Boyle was still in college herself. After receiving a bad test grade on a test she had studied extensively for, Boyle found herself in the bathroom crying. “I took out a post-it, and wrote ‘you are beautiful’ and stuck it on the mirror.”

The note, which Boyle said she wrote in eyeliner, sparked a much bigger reaction than she’d been expecting when she wrote about it on her blog. Just three days later, when she realized how many women across the world had been affected and had started writing notes of their own, Boyle started operationbeautiful.com.

Boyle made sure to emphasize that while the campaign may affect a staggering number of women struggling with depression, negative body-image, and eating disorders, it has also reached a number of men throughout the world. “It’s not just a woman thing,” she said, looking around the room, “Lots of guys participate, too.”

Boyle shared both personal stories of her own life, as well as stories of women who contacted her to share their own experiences with Operation Beautiful – many of whom had eating disorders of their own, and who had been helped by the campaign.

One specific story Boyle shared was of a teenage girl in Canada who, while in therapy for anorexia and bulimia that had gotten so bad as to threaten her life, found a note that encouraged her to turn everything around. When she contacted Boyle months later, she had gained enough weight to return to school, and was on the path to recovery.

“It can be really life transforming for both you writing the note, and those finding it,” Boyle said; and the campus took her words to heart, spreading post-it notes all over campus with encouraging messages such as “you are be(you)tiful” and “happy girls are the prettiest”.

Throughout her speech, Boyle emphasized that as much as the media tells us how to look – many of the images put out there aren’t real. The powerpoint she worked from featured images of well-known celebrities and their photos before and after Photoshop, pointing out changes in weight, height, facial structure, and hair. The hair in those commercials is a computer generated image, she said “like the Harry Potter dragon.”

Of all the stories and images she shared though, perhaps the most encouraging was her own. After telling the audience how she had engaged in self-harm as a teen, and had helped herself out of it with therapy, Boyle said that “if someone like me could go from that to running Operation Beautiful, then so can you.”

Kiersten McMonagle is a third-year student majoring in communication studies with a minor in journalism. She can be reached at KM745613@wcupa.edu.