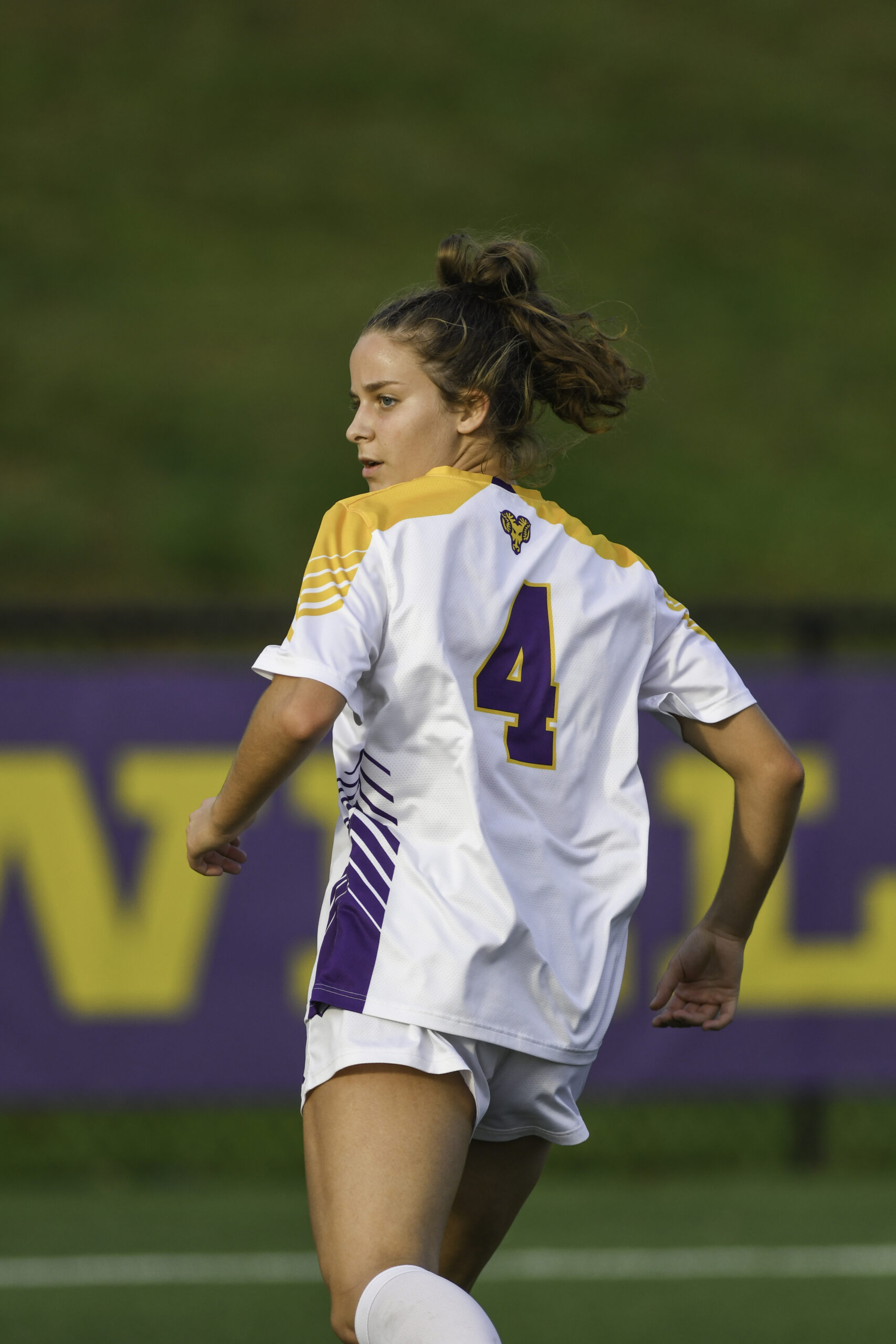 An overall strong defense and offense from both teams saw West Chester lead the game 10–5 with attempted shots at the end of the first half, none of which went in. Both teams looked ahead to the next quarter, hoping to avoid an overtime bid, and ready to battle it out in the second half for a chance to push them into the next round of the National Tournament for the Sweet Sixteen, in the hopes of becoming Regional Champs.

The nail-biting game came down to the final two minutes of the last period. With 1:35 left on the clock, Alyson Cutter stormed past her defender towards goal, passing the ball off to Jacqueline Hug who was positioned right in front of the goal. At 1:29 left Hug receives the assist from Cutter, tipping the ball into the net for the game-winning goal.

I caught up with former professional women’s soccer player and Assistant Coach Maddy Evans after the game.

What are you guys looking forward to going into the [regional finals]? And how are you preparing, what do you expect to happen?

“So, the two teams that we could play are both teams that we’ve seen before and that we’ve had success against. So, I think it’s just really embracing the moment of the final and finishing strong. We’ve had our sights set on this opportunity all year so now that we’re finally here, it’s just about embracing it and kind of sticking to our game plan that we’ve had since day one. I think the team is clicking right now… it’s a good time to be playing well, obviously playoffs, and I think today was a wonderful test that really showed us, you know, what NCAAs feels like. And it’s a battle. It’s a battle and it’s a fun battle, but… no game is easy from here on out. So, that’s what we’re looking forward to.”

How do you feel with the performance of the team overall today? Especially with the nail-biting back-and-forth that almost went into overtime.

“Really proud of the group today. It was… a strong side from West Virginia State. They played a different style than we have seen really all season, which was refreshing but also a really big test for us. And just the opportunity to play again on Rockwell, I think, propelled us forward. And I think we responded better in the second half as far as just intensity and effort and changed a couple things formation wise, but every player… from starters to subs to the players on the bench played a part in today.”

And how do you think the crowd showing up today helped?

“Massive. I mean that was the biggest crowd that I’ve seen here at Rockwell which is really awesome. I mean, the [warm] weather in November, like this helps but they certainly propelled us forward and it’s definitely a 12th man kinda out there being a support system. And it gets the girls…” “so excited?”’ I interject. “Yes,” Evans continues joyously.

NCAA freelance correspondent, Brendon Gulick projects that the Golden Rams are favored to win it all in this season’s “DII Women’s Soccer: 2022 Selection Show,” which aired earlier this month on Nov 7. The Golden Rams traveled to Albany earlier this week to take on PSAC rival Kutztown in the Atlantic Regional Championship where they won in a tight 1–0 game that closely mirrored their battle against West Virginia State. The Golden Rams now advance onto the Quarterfinals, also known as the Elite 8, Round of the National Tournament where they continue to vie for a spot at being the 2022 NCAA DII Women’s Soccer National Champions.

On the road to Albany, I had a chance to catch up with Junior forward Jackie Hug who scored the Rams game-winning goal ensuring them a spot in the Regional Finals last weekend.

How did it feel to make the only, and specifically, the game-winning goal in the last minute and a half of the game?

“I was extremely excited to have the game-winning goal and progress my team forward to the next round of NCAAs. I cannot take all the credit for the win, as my teammates put just as much work in. The cross I received from Alyson Cutter cannot be overlooked as she set the play up for a goal!”

You guys took a lot of shots on goal this second half, what do you think lined-up perfectly to allow you to make this goal?

“We had a lot of shot opportunities that were just off from the frame, but we could feel a goal coming. The goal that I scored was a direct set up from a crossing and finishing drill that we do in practice twice a week. We practice getting endline a lot, which is exactly what Aly Cutter did in the game and crossed it to where I was making a near post run, just like how we practiced. Additional players made supporting runs in case the cross was cut back centrally or far post.”

What do you think of your match-up against West Virginia State? Were you expecting it to be as close as it was? Did you expect it to go into overtime?

“We give a lot of credit to WVS, as they put up a strong fight. We were not expecting the game to be as close as it was. Although we had possession for most of the game, we just couldn’t find the back of the net like we have in previous games. At the two-minute mark, fatigue and anxiety set in as we all felt we were heading into another 20 minutes of hard soccer. Thankfully, we were able to pull out the win in the last minute.”

You guys had a nail-biting game, how do you feel about the team’s overall performance?

“I think we showed a lot of character in this game. We never gave up and were constantly supporting each other to keep the energy high. I’m very proud of this team, not only for pulling out this win, but for being undefeated all season. I think our constant support and team chemistry is credited to all our success as well as the talent across the entire team. Everyone has something to offer.”

What are you preparing for as you guys look to face Kutztown in Albany, NY this weekend? You’ve faced them twice this past season, which both were very close games. How are you expecting them to play this weekend? Do you think it’ll be an even tougher game than your earlier matchups?

“We are just staying focused. We know how Kutztown plays and we have beat them twice earlier this year, but we are aware that playoffs are a whole different beast. Anything can happen at any time. We expect it to be a good and tough match against Kutztown, like it always is every season. Since Kutztown is always competitive and they have comparable talent, urgency and playing for each other are the most important aspects to win this game.”

What are you looking forward to as you guys move onto the Sweet Sixteen?

“I am looking forward to the continued excitement that this season has to offer. Going into the regional finals, we are hunting for another trophy and I’m very confident that we can bring another one home on the road.”

As the Golden Rams continue to battle it out for a spot in the NCAA DII National Semifinals and Championship that’ll take place in Seattle the first weekend of December, the support of their fellow Rams is vital to helping them succeed. The team readies to play the Franklin Pierce Ravens in the National Quarterfinals this Sunday, Nov. 20 at 3 p.m. in Albany.

Update: The Golden Rams Women’s Soccer Team beat Franklin Pierce 2-1 in double overtime. They advance to the 2022 National Semifinals in Seattle, Washington — their first appearance since 2006. Their next game takes place on Thursday, Dec. 1, 2022 at 8 p.m.

Olivia Carzo is a junior English major in the Honors College with a concentration in Visual and Digital Rhetoric and a minor in journalism.