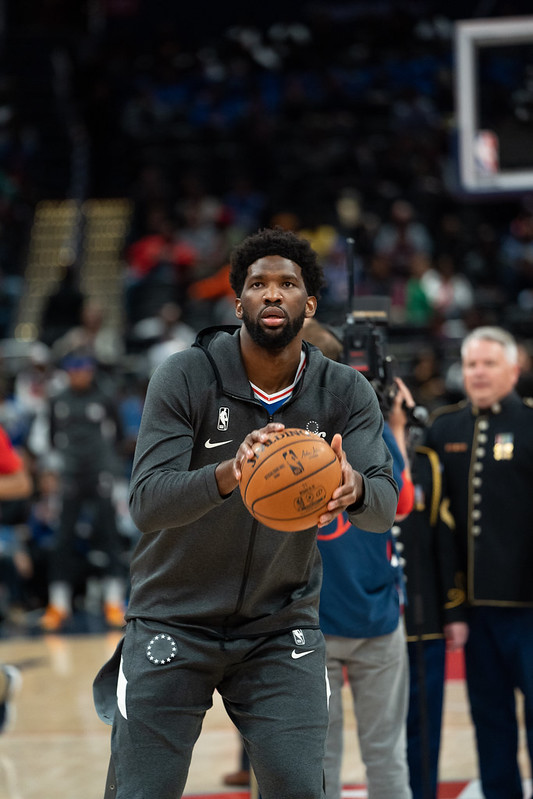 Amid all of the success of the Eagles beginning the season undefeated at 6-0 and the Phillies making the World Series, the Sixers have fallen into the background due to their disappointing start.

But they have debatably had more ups and downs and experienced more heartbreak than any of the other teams, but their fans have stuck around through thick and thin.

At the root of this heartbreak is the dreaded “Process” years. This was a long-term plan implemented by former general manager Sam Hinkie in which the Sixers would trade players to get draft picks and would lose a bunch of games in order to make sure those draft picks were good.

“Watching the Sixers during the Process years was tough, although it was enjoyable to watch players grow and turn into good players,” said Mikey Schleogel, a lifelong Sixers fan from the Philadelphia area.

Many fans were not happy about this strategy because it started with the trading of franchise point guard Jrue Holiday in 2013. In return, the Sixers received the sixth pick which they used on Nerlens Noel which never panned out.

During that draft they also drafted the eventual rookie of the year, Michael Carter Williams, but that did not pan out either.

The next draft though they were able to steal the player who was the self-proclaimed “Process,” Joel Embiid. He was projected to go first overall but due to injury concerns he fell to the Sixers at the third pick. This is a common theme for the franchise as many of their draft picks were never able to play their first years due to injury.

Without Embiid playing, the team continued to be awful and this resulted in the drafting of Jahlil Okafor in 2015, who ended up a bust, and the first overall pick in 2016 which was used on Australian point forward Ben Simmons. He also missed his first season because of injuries. In a move that was finally meant to “complete” the Process, the Sixers pulled a desperation trade by trading the third pick and other assets in order to get the first pick and draft Markelle Fultz in 2017.

This was one of the strangest sagas in NBA history as Fultz just basically forgot how to shoot a basketball. The curse of injuries put an immense toll on Sixers fans as they just wanted a healthy team to root for. Even though they were tired of this whole ordeal, Philadelphia fans still cheered on Markelle Fultz whenever he was on the court which shows how the fans still stood by their players through thick and thin.

Their loyalty was finally rewarded when a healthy Joel Embiid and Ben Simmons shared the court together for the 2017-18 season. With the Markelle Fultz saga still looming in the background, Ben Simmons received Rookie of the Year honors with one of the best rookie seasons in recent memory and Joel Embiid showed signs that he is one of the best players in the entire NBA. This resulted in their first trip to the playoffs since the Process began.

With the entire city of Philadelphia excited that the Process was finally bearing fruition with a playoff trip, this is when stakes began to take hold. Now there were finally expectations on the team to be successful and they rewarded these expectations by beginning to fall short year after year.

The biggest heartbreak resulted from game seven of the second round series against the Toronto Raptors in 2019 when Kawhi Leonard hit a buzzer beater that still haunts Sixers fans to this day. This was another year that felt like it was “our year” due to the additions of Jimmy Butler and Tobias Harris but yet again, it was another second round exit. As a matter of fact, the team has yet to advance past the second round since Joel Embiid has been on the team.

When discussing these shortcomings, fellow Sixers fan Dom Marano admitted that “it’s very frustrating especially because every year we think we have the talent to get us over the hump and it turns out we don’t.”

This talent includes the blossoming of Joel Embiid into a perennial MVP candidate and an actual former MVP in James Harden who came to the team last season in 2021. To get James Harden, the Sixers had to part with one of the rare successes of the Process years in Ben Simmons even though his tenure ended poorly with the team.

Even with this firepower on the roster, the team fell short yet again in the playoffs due to Joel Embiid yet again having injury problems and James Harden looking a bit slow.

To finally try and get over the hump this year, the team signed a slew of free agents to fill out the fringes of the roster along their two stars. Despite this they are off to a 1-4 start and they have looked out of sorts and lethargic on the court. On the plus side, James Harden looks like the James Harden of old.

Hopefully they can figure it out soon and put their postseason demons behind them to end the fanbase’s suffering and make all those Process years worth it.