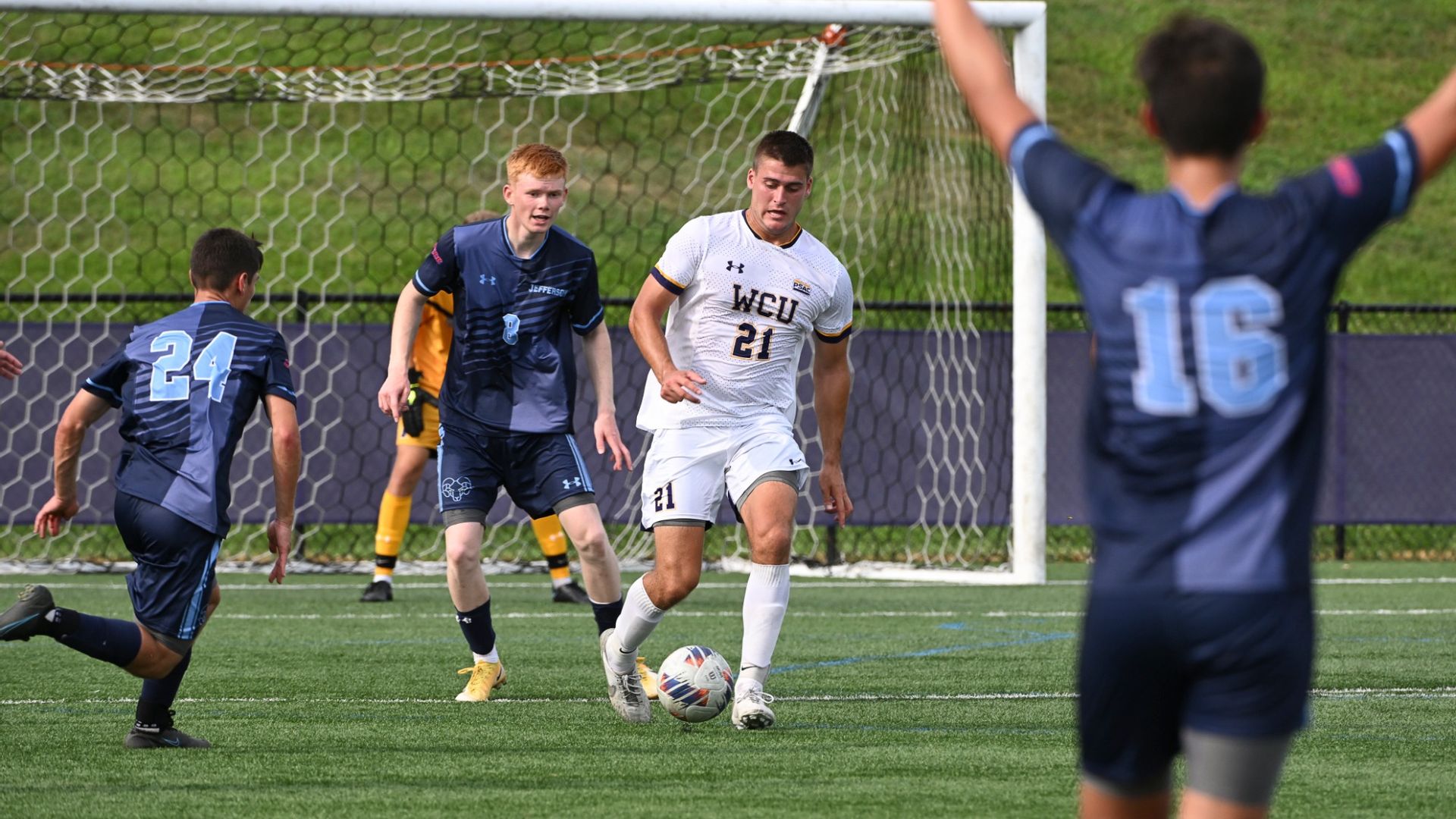 West Chester University’s men’s soccer team fell in heartbreaking fashion to East Stroudsburg University on Tuesday in the PSAC Quarterfinals, bringing their 2022 season to an end.

Falling behind six minutes into the game after Trevor Paone opened up the scoring for the Warriors, the Golden Rams tied it up just 40 seconds later with a goal from sophomore Frankie Martin. The game remained tied for about 20 minutes of regulation before Abdulla Nuredini of East Stroudsburg answered back to regain the lead. Not to be outdone, Owen Slack, freshman from Collegeville, evened things up once again in the 66th minute with his second goal of the season. The game would remain deadlocked at two through the end of regulation, and two overtime periods as both goaltenders did everything they could to keep their teams in the game. Penalty kicks ensured to decide the winner, and the teams traded shots until a winner was decided. West Chester made their first three kicks to put them in a good position to move on to the next round. However, it was ultimately not enough as East Stroudsburg made four to put them on top for good.

With the loss, West Chester finished the season with an overall record of 10–5–3, securing their sixth consecutive winning campaign in the process. They outshot East Stroudsburg  in the game 23–19, with six of the shots coming on goal. Daniel Good, a redshirt junior goaltender from Exton, left it all on the field as he finished with nine saves including several clutch plays towards the end of regulation.

Good was one of several Golden Rams that were recently named to the PSAC East teams, which recognizes the best overall players in the conference. Good earned first team honors along with Andrew Markopoulous and Craig Potts, while Frankie Taylor, and Jason Goldfeder were named to the second team. The first team honorees were a critical part of the West Chester defensive unit, which was dominant throughout the course of the campaign. The unit held the opposition to just 1.24 goals per game in the regular season.

Good’s stellar year between the pipes for West Chester moved him into the record books for the Golden Rams as he now ranks fourth all time in victories (31) and tied for first in shutouts (18). Potts and Markopoulos, while a part of a great defensive unit, also were dominant on the offensive end. Potts finished the season with six goals, connecting on over 64% of his shots on goal, while Markopoulos contributed four goals and two assists.

At the conclusion of the school year, four students will be leaving the program as they complete their undergraduate degree including Ryan Keenan, Alex Aiken, Kendall Walkes, Gio Jimenez and Shane Hartey. With the 2022 campaign now in the rearview mirror, West Chester will look ahead to the 2023 season. Luckily for the Golden Rams, they will have plenty of returning players as they look to run it back and build off a strong year.

For more information on the Golden Rams including schedules, rosters, statistics and more, visit the athletics website for all things West Chester sports!

Erick Klambara is a fourth-year media and culture major with a minor in journalism. EK924666@WCUPA.EDU