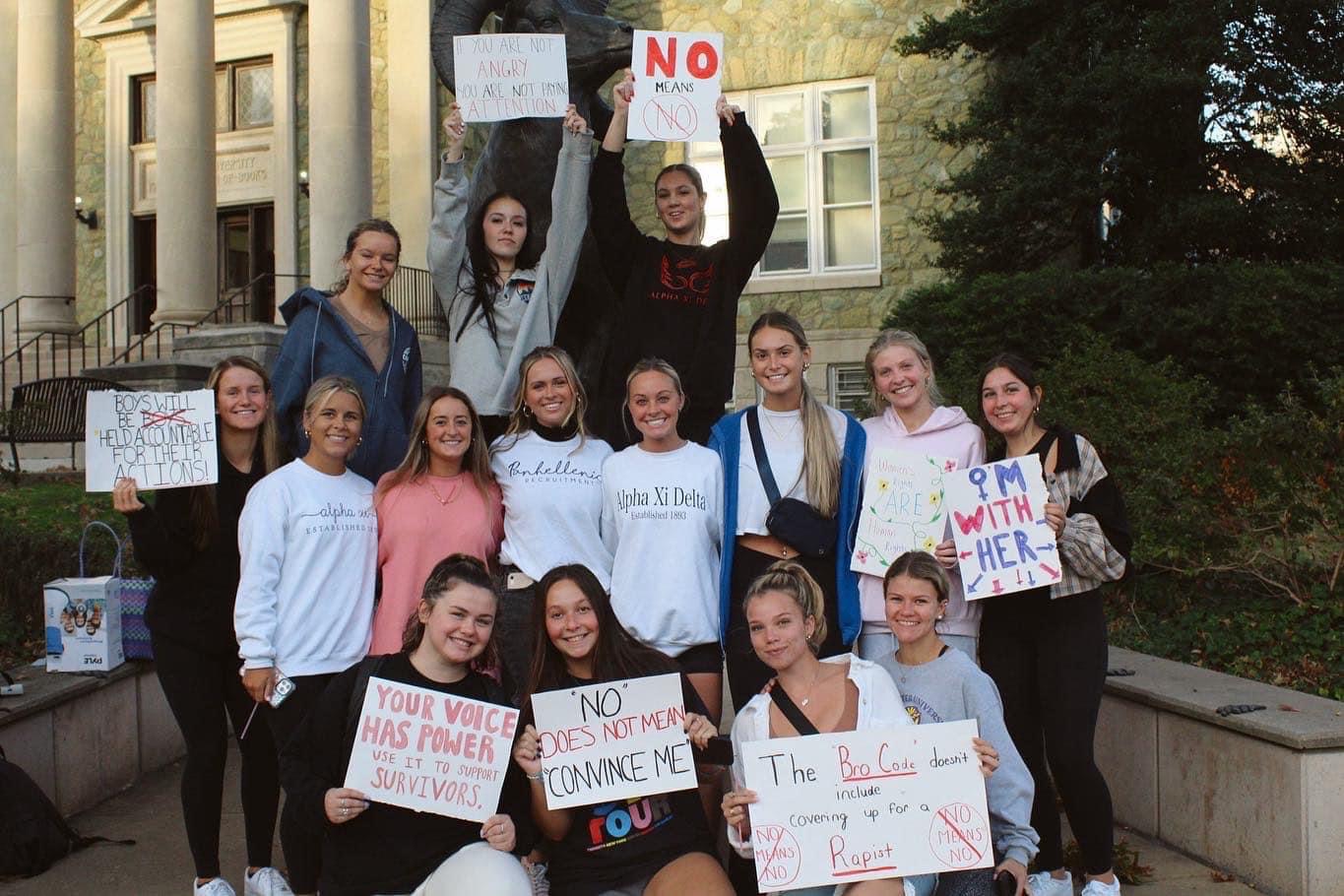 On Oct. 12, 2022, history was made by the Greek community and students of West Chester University. The WCU Panhellenic Council held the first ever women’s march to stand up against sexual assault and domestic violence.

The march took place on a brisk Wednesday night at 5:30 p.m. Around two hundred students from both the Panhellenic and Interfraternity communities attended. The night kicked off with each executive board member of the Panhellenic Council introducing themselves and explaining the importance of the march. After the introduction, Olivia Somers, volunteer coordinator and training coordinator from The Crime Victim’s Center of Chester County, presented information about her organization.

“If something happens to you and you don’t know what to do or who to call, just know that The Crime Victim’s Center of Chester County is always here for you. We are walking distance away from campus and have many resources to help you. We believe you and we stand with you,” Somers said. The Crime Victim’s Center of Chester County is a non-profit organization in West Chester. The organization provides numerous resources for sexual assault victims such as counseling, financial help and 24/7 hotlines. They are located on 135 W Market St and are open to any and all victims of sexual assault and domestic abuse.

The march began at the Ram Statue on W Rosedale Ave, then continued up S High, Sharpless St, S Church St, then to Rosedale to return to the Ram Statue. The students filed in a line carrying posters that read powerful statements like, “I want every girl to know that her voice can change the world” and “I need to be able to tell my kids that I didn’t stay silent.” The march lasted about 15 minutes with many bystanders cheering and honking their horns as the participants walked by.

“The women’s march showed me the amount of support and care that our community has towards injustices towards women,” said Michaela McLaughlin, a sister of Alpha Delta Pi sorority, “While walking in the march, I was able to understand the huge impact our words and actions have on these women.”

The event didn’t end after the march. Once everyone gathered back at the ram statue, the Panhellenic Council presented therapy dogs and food for the attendees. There was also an activity called the “Red Flag Campaign” where the students could write down alarming signs and behavior in a partner on a red piece of paper.

After the activities, Samantha Tellez, Panhellenic Vice President of Diversity, Equity and Inclusion, explained the hard work and dedication that went into planning the event.

“We were brainstorming a thoughtful, impactful response to all of the allegations and investigations surrounding sexual assault in our Greek community for many months,” Tellez said. “Once we decided to host the march, we had a month to plan it.”

Many meetings were required to make the march happen. The Panhellenic Council was required to meet with the police chief, chapter presidents, their advisors and executive board multiple times a week. Various request forms were needed to be approved throughout the process.

“We had to consistently reflect and ask others (and ourselves) if we were honoring the sensitivity and magnitude of the topic we were addressing,” said Tellez.

The women’s march reminded sexual assault and domestic abuse victims that the Panhellenic community stands with them and they will not stand for silence.

“We no longer want to be silent, so what better way to show that than to gather almost 200 of us and show all of West Chester that enough is enough,” said Tellez.

Jamie Simonds is a fourth-year media and culture major with minors in digital marketing and journalism. JS928049@wcupa.edu