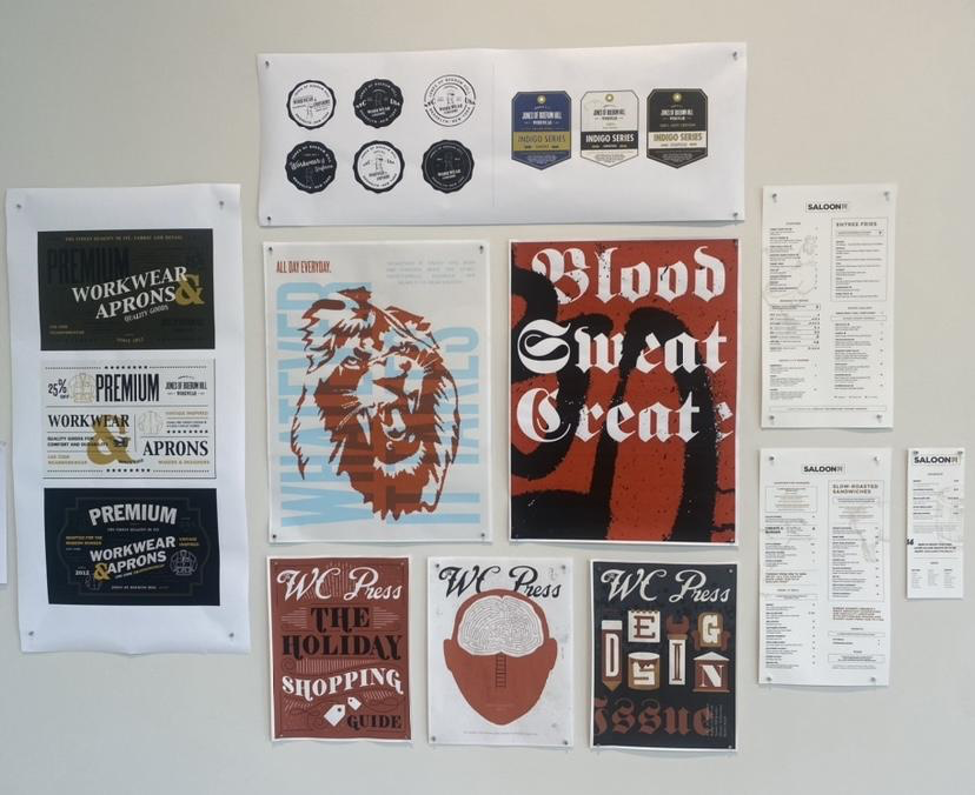 West Chester University’s Knaur Gallery is displaying the graphic design work of some accomplished alumni this month in an exhibit titled “Making Her Mark: The Graphic Design Legacy of Peggy Hill. An Exhibition of WCU Graphic and Interactive Design Alumni.” The show includes pieces from a group of six former students, including a wide variety of art from projects for the W.C. Press, to designs for Nickelodeon and Insomnia Cookies. One thing they all have in common is that they were taught by former West Chester University professor and Art + Design Department Chair, Peggy Hill.

Peggy Hill worked at WCU for nearly three decades, retiring in 2019. Dr. Heather Sharpe, the current Art + Design Department Chair who took over the position after Hill retired, said the exhibit is meant to “recognize what a tremendous impact [Hill] had on the graphic design program,” and to show off the amazing work of the students she mentored. Sharpe detailed how Hill made the department into what it is today. When Hill came to WCU, she was one of only two professors in the graphic design program, and she helped guide the program through the shift from drawing to digital design.

The exhibit has a wall separated into six sections showing the various work of the GAID program graduates. The design styles and projects are all unique and showcase how talented and dedicated the artists are to their work. The artists featured are Nazarena Luzzi Castro, Trey Patterson, Pat Heinbaugh, Justin Rentzel, Chuck Scott and José Mestre. Their experiences spread wide across the design field with each of them having unique styles and fields of work. Rentzel’s display includes advertisements for Dietz & Watson while Patterson includes a collection of whimsical landscapes and portraits. The exhibit as a whole shows how many different directions a degree with the GAID program can take you in.

Nazarena Luzzi Castro, Lead Product Designer at Square in Philadelphia, who describes her personal design style as “colorful and chaotic,” took some time to talk about her involvement in the exhibit. She graduated as a graphic design major and went on to do some work in the West Chester area, with the W.C. Press being one of her first clients. Her section includes design work done for them as well as the menu from Saloon 151 as examples of her work. Castro hopes that students who come by the exhibit realize that “the world is your oyster and even after school you can teach yourself new and different things.” She stressed that while what’s taught in the classroom is important, there is still much to be learned out in the field. When it came to choosing her pieces, she said “Peggy was the one professor that taught me a lot about typography, color and spacing. I sent work that reflected that.”

Hill did not only inspire students during her tenure at WCU, but fellow professors as well. Former colleague and long-time friend, Professor Karen Watkins, describes Hill as “a great leader, teacher and mentor and a great role model for young women who want to be professionals in the graphic design profession.” Hill hired Watkins as a professor in the WCU art department and helped her throughout her time at graduate school soon after. She described Hill as someone who “didn’t blink” when it came to helping her and others.

Watkins watched the Graphic Design Program grow under Hill’s guidance throughout the years. She recalled when she first moved to West Chester and the art department had very little recognition, to now having students consistently winning renowned awards such as the AIGA FLUX and Graphis Awards. Watkins said Hill pushed her to be better just like she pushed the entire department, and Watkins also pushes her students to accomplish their goals. She hopes that seeing the work of some of these successful alumni might help students see “that hard work pays off.”

The back wall of the exhibit contains a large wall decal with quotes from former students about the impact Hill had on them with their work. Some examples are “when Peggy smiled you know you really blew something out of the water,” and “she didn’t sugarcoat anything, but instead gave me ideas on how to be a better designer and grow as an artist.”

The exhibit will be open in the Knaur Gallery in the Swope Music Building until Oct. 28, and there will be a reception on Oct. 27 from 5:30 p.m. to 8 p.m. where anyone can attend to meet Hill and other designers featured in the show. The exhibit is a great representation of the different opportunities out there for graphic design majors, and a reflection of the remarkable career and impact Peggy Hill had during her time here at WCU.