After ten days without matches, West Chester Volleyball picks up right where they left off against Lock Haven 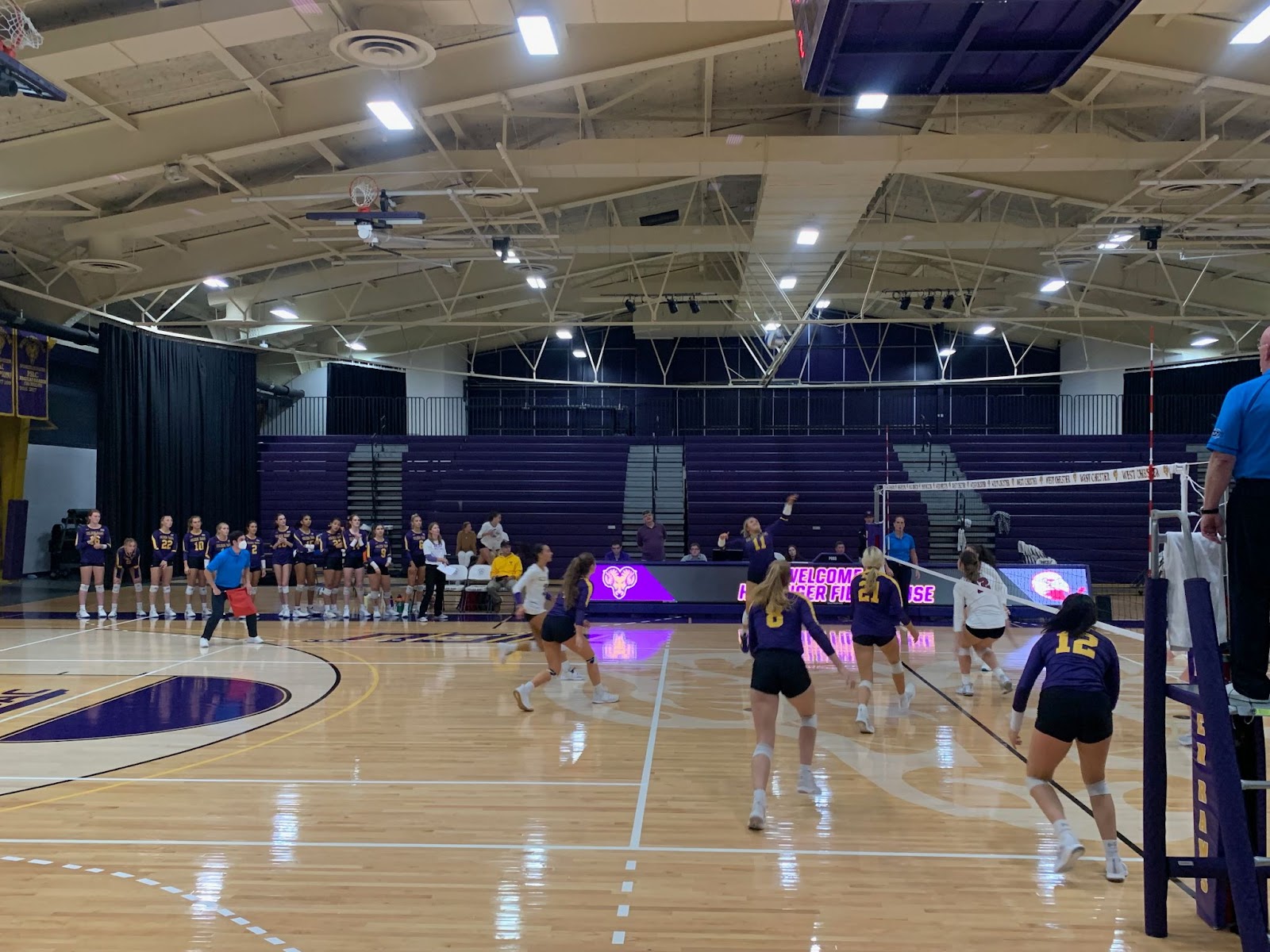 Senior Tori Wright goes for the kill off of the set from Jamie Byrne. Photo Credits – Tommy Anderson

The WCU women’s volleyball team had an absolutely torrid start to their 2022 season. After blazing through their non-league schedule to open the year, West Chester started conference play with a win against Millersville, leaving the Rams with an 11-1 record as they entered a week-and-a-half stretch without a match.

This extended break failed to disrupt the rhythm of the Golden Rams as they quickly dispatched the Lock Haven Bald Eagles 3-0 to improve to 2-0 in conference play and 12-1 overall.

Head Coach Kassie Bellaver was very pleased with the play of her Golden Rams in the triumph. “It was a very, very strong performance, especially in set one. I know the girls were excited to get back in Hollinger Fieldhouse for the opening of PSAC conference play,” Bellaver stated.

WCU got going quickly, starting the first set with a 4-0 run. They extended this lead to 11-4 and forced Lock Haven to call a timeout at 14-6. Even after the Bald Eagles talked things over, they were unable to solve the Golden Rams’ attack, and West Chester breezed through the first set by a score of 25-9.

The second and third sets were more of the same for West Chester. Lock Haven seemed to have found their footing by the middle of the second set, as they were down just three points: 16-13. However, the Golden Rams again proved to be too much, winning the second 25-17.

In the third set, Lock Haven showed some life, taking their largest lead of the match 10-6. This lead was quickly extinguished as West Chester rattled off 9 straight points, taking the lead and not looking back. The Golden Rams closed out the set 25-18 for a straight set victory.

“We definitely came out strong, but we knew that Lock Haven would be a tough opponent for us, and they showed that in set two,” Bellaver added. “We absolutely had to work to earn the 25 points, and again in set three. We were down early, but we have a quiet confidence about us, and trust that regardless of a differential we’re going to be strong and fight back.”

The 10 days without a match proved to be no obstacle for the Golden Rams, as Coach Bellaver credits her team’s effort in practice as a key to their success. “We actually had very high level intensity practices,” said Bellaver. “Some very, very good scrimmages amongst ourselves. We feel, if we can always show a tough opponent in ourselves at practices, then the games are fun.”

It was a well-balanced attack for the Golden Rams in the win. Senior Hailey Lewis led the team in kills for the second straight game with 11. Lewis, coming off a 19-kill performance against Millersville that gave her PSAC East Athlete of the Week honors, shared her thoughts on her stellar job as of late.

“Honestly, I just really try to get in the zone when it’s gameday,” said Lewis. “Gameday is the best day because I love playing, and I look forward to it every week. I just do everything that I can in my aspect of preparing physically and mentally.”

The match against Lock Haven was just the beginning of a very busy stretch for the Golden Rams, as they have played four matches since. Not even 24 hours after their victory against Lock Haven, the Golden Rams were back in action at home versus Bloomsburg. On short rest, WCU made quick work of the Huskies, winning in straight sets for the second time in as many days.

This past Wednesday, the Rams took a brief pause in the PSAC schedule to play a non league match against Chestnut Hill, where West Chester was defeated in four sets. Despite the loss, this was good preparation to get the team ready for some huge conference matchups that are right around the corner.

Over the weekend, the Golden Rams faced two of their top opponents in the PSAC East. Unfortunately, they fell 3-1 against Shepherd on Friday and were swept 3-0 on Saturday against Shippensburg. Despite the losses, WCU will get a chance at redemption, as they will see both of those teams again in the beginning of November. The volleyball team will be back in action Friday at East Stroudsburg.

Tommy Anderson is a third-year Communication Studies major with a minor in Journalism. TA946675@wcupa.edu