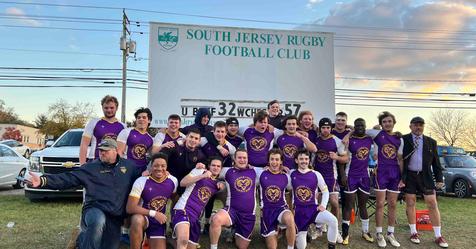 Following a 5–1–1 season, the West Chester University men’s rugby club is headed to Houston to stake their claim at the Division 1-AA National Championship. Facing off against Virginia Tech, the Rams will be playing the biggest game in the program’s history. The squad lost several starting seniors prior to the season, but was able to stand their ground as a formidable force in the league, defeating rival St. Joseph University 30–19 in the D1-AA North Eastern Regional Championship and paving the way to this history-making showdown in Houston.

That win was the first victory by West Chester over SJU in over five years. In fact, their rivals defeated West Chester this season, handing them their only loss of the year. The Rams also tied with Rowan University and handed losses to the following schools over the regular season: Delaware, Temple, James Madison, Salisbury and Rutgers. Following the season, the Rams claimed the number twoseed behind St. Joe’s. They qualified for the regional tournament ranked at number 19 and prepared to take on the 24th ranked Buffalo.

Defeating Buffalo by a score of 57–32, the Rams claimed their first playoff victory in program history. They weren’t done there, however, as they met a familiar foe in SJU, defeating them by the aforementioned score of 30–19.

It has been a season for the ages for the men’s rugby team as they continue to shatter expectations and tread new grounds for the program. It is a huge opportunity for the men to go down to Texas and claim a ring for the school. However, they not only had the hurdles of competing game by game to forge this championship path, they also faced a bit of a financial challenge.

Because the team is not technically considered a university sport, the club initially lacked the funding to travel to Houston in order to compete. They were able to put together a GoFundMe page, however and ask, via social media, for donations and any other help to be able to make the trip and make history in their first appearance in a championship game. Time will tell if they will make history becoming the first team in the school’s men’s rugby club to claim the ring.

Fortunately, the team exceeded its goal of $12,000 in only six days and is now preparing to fly down next Saturday, the eleventh and vie for the championship. I reached out to Vice President of the program, Andrew Barber, who told me to say how thankful the team is for all of the generous donations and how they look forward to bringing the ring home. We wish them all the best as they travel to Texas. Bring it home, men!