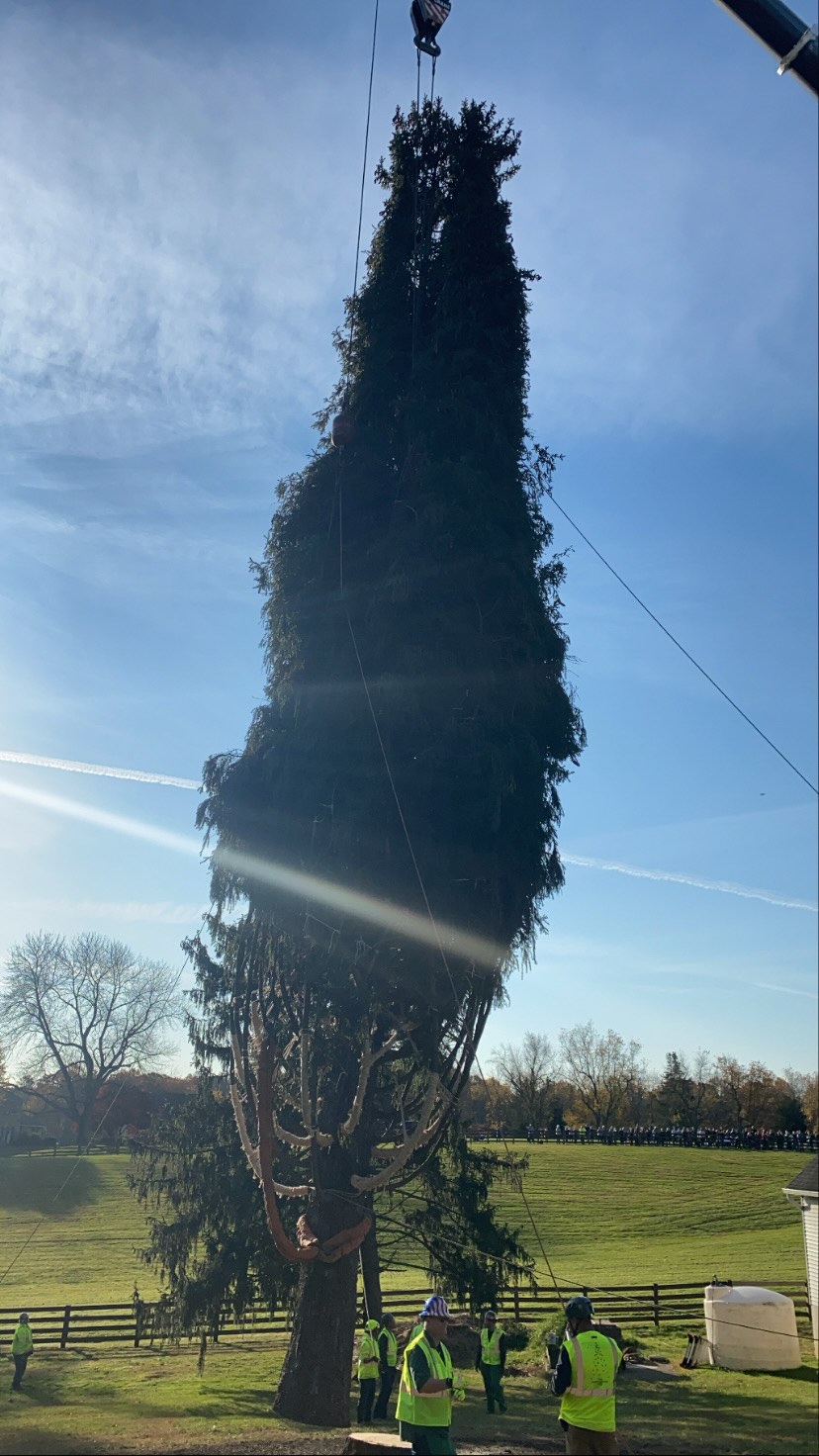 For the first time in history, the 2021 Rockefeller Christmas tree came from Maryland. This 79-foot Norway Spruce was cut down and transported up to New York City last Thursday morning as the official Rockefeller tree of the year.

This tree was cut down in Elkton, Maryland, about an hour from West Chester University. As a West Chester student who just so happens to be from Elkton, I of course had to head on down to see the tree live and in person being cut down. On the morning of Nov. 11, I woke up at 5 a.m. and headed down to watch this historical event. Policemen had already blocked off the roads leading into the neighborhood to deter big crowds from forming. Luckily, I had an insider to get me in.

My father, Glenn Beachy, grew up in the house that the tree has resided in for the past 85 years. Knowing all of the neighbors, he was able to get my family and I up-close seats to the tree cutting — only a few yards away. When arriving at the backyard, the first thing that greeted us was a complimentary breakfast table from Rockefeller, and workers handing out spruce tree sapling seeds.

Approaching the tree, news reporters gathered around the team of men preparing for the cutting of the tree. It took them about an hour and a half to set up the crane that lifted the spruce into the air, onto the cargo bed where the tree would make its 140-mile one way trip to Rockefeller Plaza.

The tree was cut at 8:30 a.m. and it took about three and a half hours to secure the tree in the bed and send it on its way. Hundreds of people lined the fences and streets to catch a glance. A lot of the community came out to this event. There isn’t much that goes on in the small town of Elkton, so this was something that really brought everyone together and rallied residents into the Christmas spirit. People had Christmas music blasting, decked out in their best ugly sweaters to bid the Maryland tree farewell.

Talking to my father and uncle, going back to the house they spent their childhood in sparked memories of sledding in front of the very tree, back when it was half the size it is today. To them, it was amazing to have the opportunity to catch a glimpse of their old house — something they thought they would never have the opportunity to do again.

Talking to friends who go to the University of Delaware, all the students that live on Cleveland Avenue, the road the tree’s journey started on, gathered to wave the tree goodbye and catch a glimpse of the 12-ton spruce. One student, Tommy Connolley, stated, “As someone who comes from the county where the tree is from, watching it pass by my college was a really cool experience, everyone was outside, and it created this type of unity that I really haven’t seen before.”

Even coming back to West Chester, it was the buzz of the town. Most people had no idea we went to school so close to the famous Christmas tree. It was an astonishing experience and story of how this tree from a small backyard in Elkton, Maryland, made its merry way to New York City for the world to see.

Lauren Beachy is a second-year Media and Cultures major with a minor in Communication. LB946715@wcupa.edu